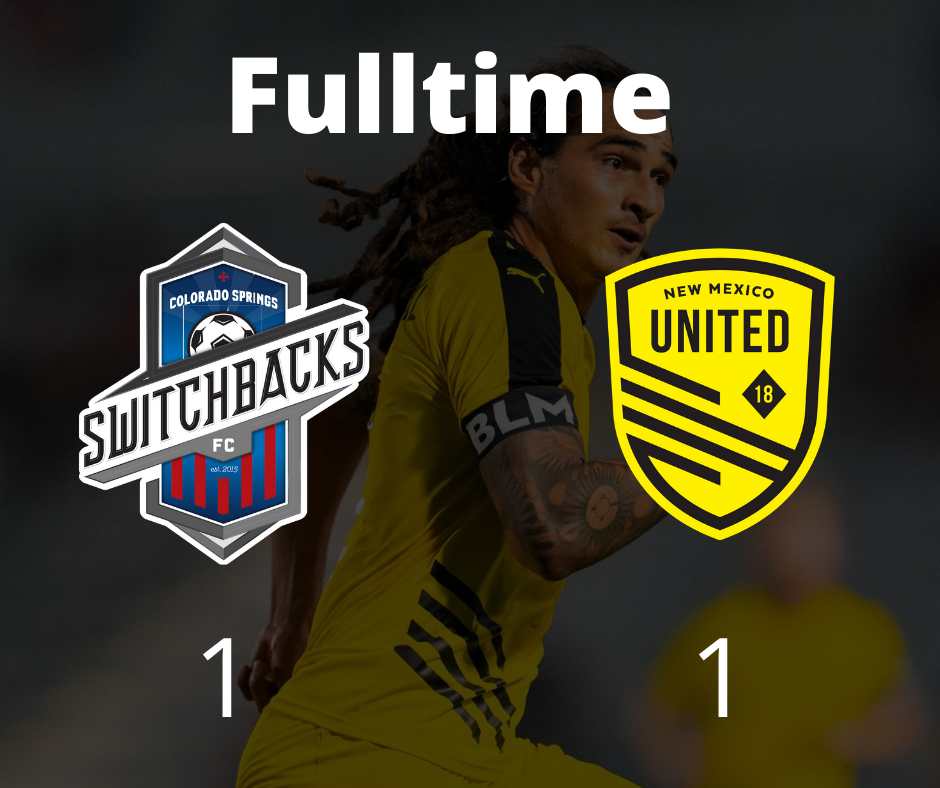 Things didn’t exactly follow the script for New Mexico United on Saturday night. Colorado Springs Switchbacks FC didn’t look like the same club that had lost to United twice on the season already and gave the men in yellow all that they could handle.

From start to finish, the hosts were the side that looked like they were ranked near the top of the USL power rankings. They looked sharper with their passing, quicker off the ball, and made better decisions. Within the first fifteen minutes of the match, the pressure from Switchbacks FC put United deep inside their defensive half trying to hold off the attack. In the 13th, Aidan Daniels nearly put Colorado Springs on top with a shot from just outside the box, but his attempt went off the crossbar.

United didn’t get their first look at goal until the 17th. David Najem would take the ball to the byline and then chip it back into the box where Amando Moreno was waiting. Moreno would get his head on the ball, but his attempt was just wide.

All night long, United struggled to find their rhythm. The match was stopped repeatedly due to fouls or other stoppages in play, and they couldn’t string together periods of possession. Time after time, United’s attempts to hold the ball were ended by heavy touches or they were beaten to second chance balls by a Switchbacks side that looked faster. From how the clubs looked on the pitch, it was hard to tell that United was the more rested side.

Fortunately for United, each attack by the hosts was ended by the own inability to finish chances, or the defense stepped up and made a stop.

Coming out of the break, Head Coach Troy Lesesne turned to Ryan Williams in hopes that he would help provide a spark for United. As the second half opened, United did look better on the ball and quickly put themselves into position to potentially break the deadlock. In the 50th, United would win a free kick around 22 yards from goal and elected to have Chris Wehan stand over the ball. Instead of playing the ball deep into the box, Wehan went short to Andrew Tinari at the top of the box. With a little space, Tinari put a right-footed shot on target, but the attempt was saved by Switchbacks keeper Sean Melvin.

Minutes later, the high press from United forced the first real mistake of the match by the Switchbacks defenders. As they attempted to play the ball forward, it was intercepted by Williams. Ryan immediately played the ball forward to Moreno, who deftly headed the ball on to Romeo Parkes. Making his way into the box, Parkes would be taken down by Adrian Diz Pe, and a penalty was awarded to United. Moreno would be asked to take the attempt and buried his shot in the lower-left corner of the goal.

The leader wouldn’t last, however. In the 59th, Switchbacks midfielder Daniels once again found himself with space at the top of the box. He dropped his shoulder and move the ball onto his right foot and let loose with a curling shot towards goal. Daniels’ shot had more than enough pace and was perfectly placed into the top right corner of the net, leaving Cody Mizell with no chance to save it.

With the score now level, the pressure was back on United to try and earn the lead once again. The match took a downturn for United in the 65th when Williams picked up a yellow cad with a cynical foul. Keeping his body high, he generated contact with George Lebese, leaving him in a heap on the ground. Williams’ night was over just ten minutes later after he received his second yellow of the match. The second yellow given to Williams appeared excessive, despite the fact that the attempted tackle was late. The challenge wasn’t particularly dangerous and was in fact far less egregious than the play for which he received the first card.

Down to ten men, Lesesne knew he had to adjust his club’s tactics for the final fifteen minutes of regular time. He would send in instructions for his side to change to a 4-4-2, a much more defensive formation. With United now playing the rest of the match behind the ball, the hosts couldn’t find a later winner and managed to take their first point against United.

Austin Yearwood – Another solid performance tonight from Yearwood despite the tough result. He played very well against a Switchbacks side that has a lot of confidence in their level of play currently. With one interception, one block, and four clearances, he was a bright spot for the club on an otherwise difficult night.

With the draw and other results from around the group, United still have a lead in Group C, but it is down to five points. They have a chance to extend their lead over El Paso again next Saturday when they head back down to El Paso for the third time this season. That match is scheduled for a 7:30 p.m. (Mountain) kickoff from Southwest University Park.