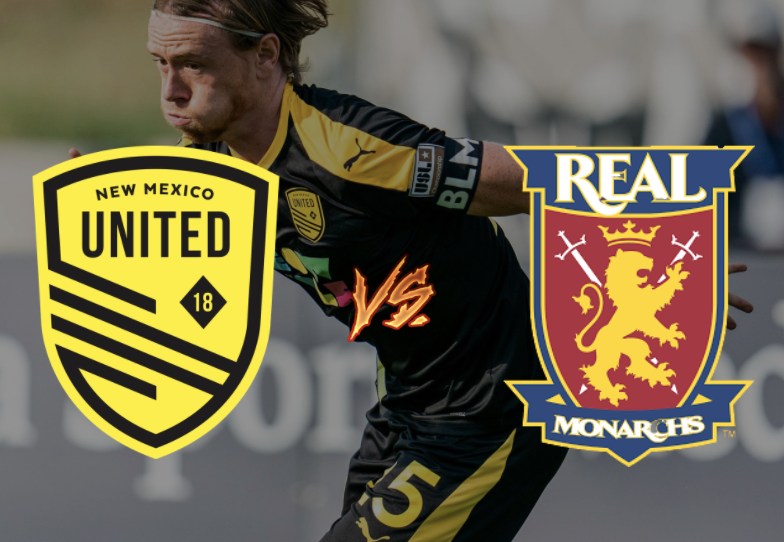 For New Mexico United, the end of the 2020 regular season is only 18 days away. While it feels as though it only just started for anyone who follows the USL, it really has been a sprint to the finish for everyone involved.

Even now, clubs are still having to postpone matches due to positive tests for COVID-19. The latest being the Rio Grande Valley Toros, United’s opponent in 11 days. Those matches having to be rescheduled only make for a more jumbled end to the schedule. Fortunately for United, they’ve been mostly unaffected by positive tests, but at the same time, they’ve been unable to play a single match here in the state. The way this season has gone, everyone has had to take some good with the bad.

Real Monarchs SLC has seen first hand the bad from this season. After earning a meager four points through their first eight matches, things were looking very grim for the defending champions. In their two most recent matches, however, they have been able to pick up six points from those matches, and with six more left to play, they have an outside chance at making the playoffs.

Those playoff hopes are in the balance on Saturday against United. If the Monarchs were able to pull off a win in the third meeting between these two clubs within the past month, they would pull to within five points of second place and seven points of first. They’ll have to find their way past United first, though.

One of the problems they’ve faced all year long is consistency. They’ve been held goalless four times, they’re averaging 1.2 goals per match, and are conceding at a rate of 1.4 goals per match. On the season, they’ve only put shots on target 43.2% of the time. All of that has led to a conversion rate of 14.8%. Those stats are just a roundabout way of saying that Real has struggled to score this season and are tied for 26th in the league out of 34 clubs.

That’s one of the side effects of a roster upheaval, either through players leaving for other clubs or being called up to the MLS. The Monarchs weren’t left without talent, they just haven’t lived up to expectations so far. While the young guys haven’t held up their end of the bargain, the veteran Jack Blake has. Through ten matches, Blake has commanded the midfield and has been the most dangerous player on the Real roster. With 17 chances created, 13 shots, one goal, and one assist, Blake is a threat every time out on the pitch.

Through Blake, the Monarchs try to get the ball into the area. That’s where they’ve had the most success this season, scoring ten of their twelve goals from inside the box. The issue still remains consistency. They don’t have a proven scoring threat. They don’t even have one player with more than two goals. Against a club like United, they’ve only managed one goal in two prior meetings this season, and things don’t look promising for them on Saturday night.

Noah Powder – The defender’s name was called frequently during the first two matches as he was one of the toughest players for United to beat in the final third. If United wants to win, they’ll have to get Powder out of position and making mistakes.

Their last time out, United lost for only the third time this season. Late mistakes cost them a 2-1 lead, and they dropped points to El Paso for the first time. Now, United is facing the possibility that they no longer control their own destiny when it comes to the playoffs and have to find a way to rebound. They may also need some help down the road.

Even before it gets to that point, though, United has to take care of business in Herriman. Twice this season, these two clubs have met, and each time United has come out on top. Each time, United showed something different. The first match, United played deep, allowing Real to control possession. The second time around, United flipped the script and controlled possession. No matter what United did, Real didn’t have an answer.

The struggle for United going forward will be continuing to answer the bell on the road. As of now, three matches remain as possibilities for United to play even a single match in Albuquerque. No matter where they play, though, they have to get the job done.

The play of the midfield is going to be key against Real on Saturday. No matter who starts, their job will be to disrupt the build up play of the Monarchs. Andrew Tinari has become a fan favorite with his play on the pitch. Tinari is a solid box to box player and is showing why Troy Lesesne targeted him in the offseason.

If United can win the midfield, it opens up a much larger number of possibilities for them in the final third. Most notably, it gives Chris Wehan and the forwards license to operate between the defenders and catch them out of position.

David Estrada – In his second season with the club, David has become more of a squad player, with playing time harder to come by. But even in his limited time on the pitch, his level of play has improved. Over the past month, he’s contributed goals and assists in the final third, and his veteran knowledge in the defensive third is helping the rest of the young guys develop around him.