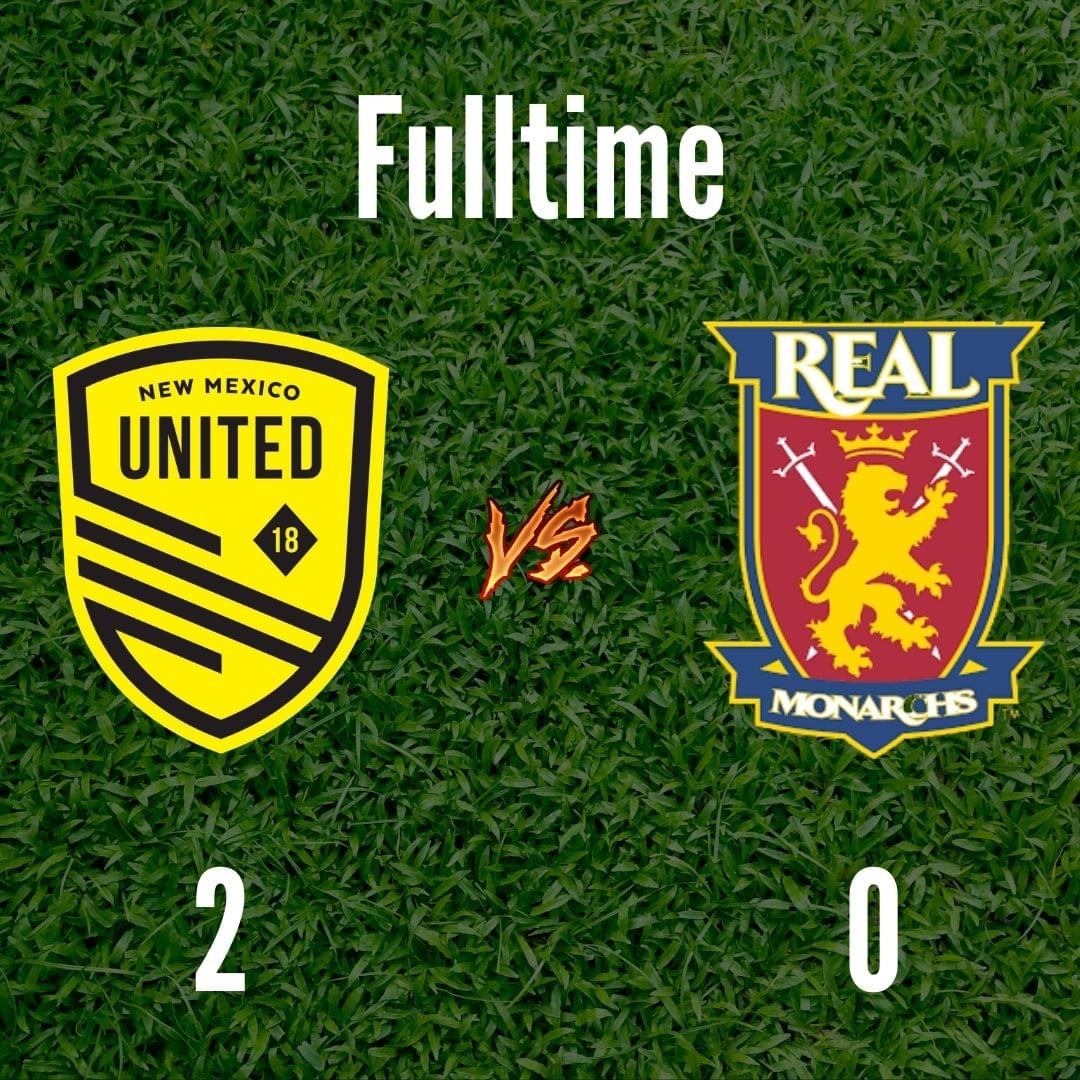 New Mexico United knew they needed a big win going into the weekend in Herriman,  Utah.  With only two points separating themselves from El Paso Locomotive FC,  United knew that they needed a win to keep their hold on first place. Once again, the club was carried by Amando Moreno, whose brace gave United more than enough firepower to walk away with the full three points.

After the loss to El Paso last week, there was some question about whether or not the stresses of travel were beginning to affect the club. United was completely outplayed in the second half of that match, and late mistakes cost them a result. Then came the question of if United could withstand a stretch in which they will play five matches within 18 days. Having played every match on the road this season, it was only a matter of time before it had an effect on the player. The club’s performance today in Herriman appears to answer at least some of those questions.

Prior to the match, the team sheet put out by head coach Troy Lesesne appeared to have the club set up in a more traditional 3-4-3 formation. Within Lesesne’s system, however,  the outside midfielders have a tendency to drop back and play more of a wide back position allowing United to easily transition from an attacking formation to a more defensive look with five players at the back.

Although the forwards were led by veteran Devon Sandoval, it quickly became apparent that Amando Moreno was the player to have a shooting boots on for the day. It only took until the 7th minute of the match before Moreno had his first attempt of the day. The ball was initially played forward in an attempt to get Sandoval off to a fast start, but the ball was deflected wide by a Monarch defender, and it fell to the feet Chris Wehan. Wehan was then able to deliver a cross from the right flank towards the penalty spot where Moreno was waiting. Moreno would put his boots through the ball, but the shot was just wide of the far post.

As the two sides started to settle into the match, United’s frustrations with how the Monarchs were playing began to appear. For the second time within three matches, Andrew Tinari picked up an early yellow. It was a moment of worry when that happened for United supporters because two weeks ago, the midfield got into trouble early as well, and in that match actually saw Ryan Williams get sent off after receiving two yellow cards. Fortunately for United, Tinari was able to rein himself in and play a solid remainder of the match.

As the match neared half time, United’s press had not paid dividends. Backup keeper David Ochoa had managed the goal area well, but it wasn’t enough to stop Moreno. After earlier attempts had been stopped by Ochoa, United was finally to put one past him in the 40th. And the rest of the club were unable to find the back of the net in the fortieth. Once again, a ball was played over the top to Wehan, and he was able to get behind the Monarchs defenders. Wehan attempted to play the ball down initially, but his touch was just too heavy. The ball tough, managed to find its way past Ochoa while Moreno streaked in from the far left post and tapped the ball in for the opener.

The Monarchs tried their best to plead their case that an offside call should be held against Moreno, but after conferring, the referee and the assistant referee decided that Moreno was, in fact, onside. Now that they had the lead, United needed to show that they not only could close out the half but also come out of the break on the right foot.

While they didn’t necessarily come flying out of the gate at the start of the second half, they definitely performed better than they did in last week’s match. At half time Monarchs coach Jamison Olave decided to sub off youngster Kyle Coffee and bring on Ryan Sierakowski in an attempt to swing the momentum for his club. In two prior meetings this season Sierakowski had proven to be a viable threat for the Monarchs and United wasn’t quite sure how to handle him. He proved that once again today early in the second half by creating chances for the forwards. This time, however, the United backline was up to the task of containing Sierakkwski and prevented him from making a difference in the match.

In the 60th, Moreno struck once again and was able to double United’s lead. An interception by Austin Yearwood started an end-to-end run by the forward. After the interception, Yearwood played the ball to Moreno, who took off on a sprint the entire length of the pitch. As he made his way forward, Moreno played the ball back into the middle of the pitch. Sandoval took possession and, in turn, sent the ball to Wehan. With his head up, Wehan spotted out Moreno and was able to play a through ball that was able to sneak through the Real backline. Throughout the match the Monarchs had attempted to run an offside trap, and this time it bit them hard. Moreno timed his run perfectly and took possession behind the Monarchs defenders and went one-on-one with Ochoa. The keeper rightly came off his line in an attempt to stop the shot, but a nifty ball roll by Moreno to Ochoa’s and he was able to sidestep the keeper and place the ball in the back of the net.

With a two-goal lead, all that was left for United was to close out the match. A strong defensive effort from United throughout the match snuffed out any hope of that happening as the men in yellow and black picked up their fourth clean sheet of the season. Throughout the match United allowed the Monarchs to take a total of 12 shots, and of those, only one of them was on target. The effort shown tonight was a great way for United to bounce back after the tough loss in the prior week.

Amando Moreno – With this performance today, Moreno extended his consecutive game streak of tallying either a goal or an assist to 10 matches. With his brace today, Moreno moved into a tie for the team lead in goals scored this season with 6

With the win today, United extended their lead back to 5 points within Group C of the USL Championship. Whether or not they finish that way after the weekend depends on the outcome of the El Paso and San Antonio match tonight. United fans will be rooting for either a San Antonio win or a draw in order to give United the best possible chance at finishing 1st within the group. Even if a positive result comes out of El Paso tonight, United still has work to do to ensure they finished atop the group.

Next week New Mexico United will have their 1st ever ‘home’ match of the 2020 season as they take on the Colorado Springs Switchbacks FC from Weidner Field in Colorado. Through a partnership with the Switchbacks, United has been given a chance to sell 1000 tickets to only New Mexico United fans ahead of next week’s match. That match will take place on Saturday, September 19.