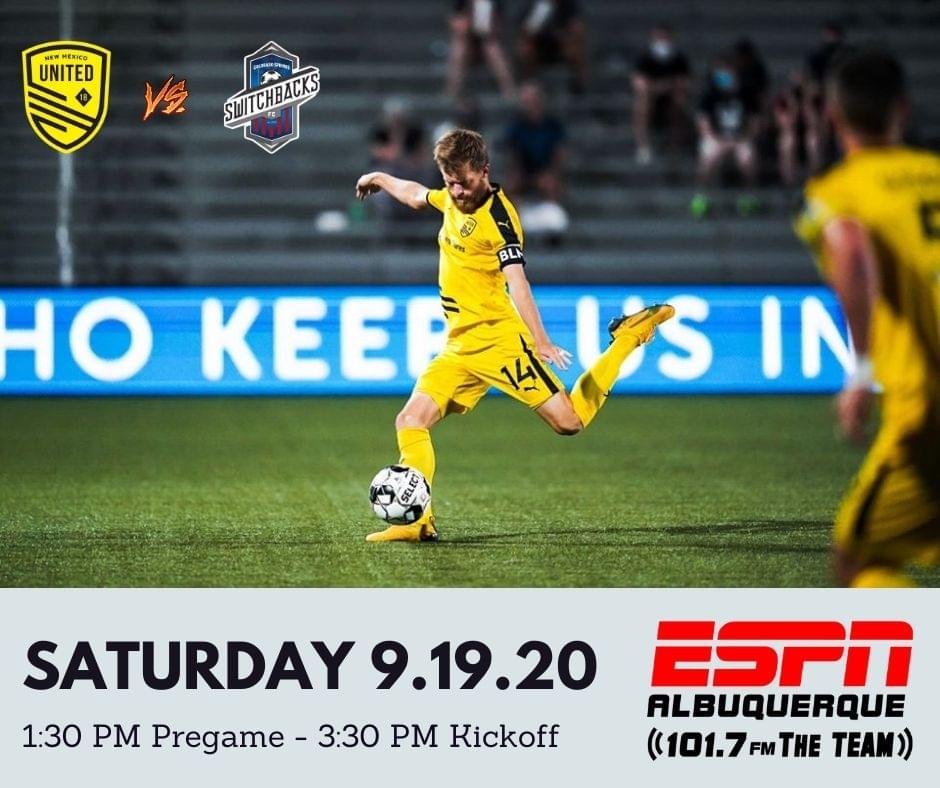 Without even stepping foot on the pitch this week, New Mexico United was able to clinch a berth in the 2020 USL Championship Playoffs. After an improbable result in which Portland Timbers 2 defeated Real Monarchs SLC, the defending champions were eliminated from playoff contention. Their elimination allowed both United and El Paso Locomotive FC to secure their spots as the representatives from Group C. United’s job isn’t done though.

The club still has four matches remaining in the regular season, and in those, they have a chance to secure the top spot within the group. If United can secure that top slot, they will avoid one of the best clubs in the Western Conference this year, San Antonio FC. In the playoff format this year, the top seed from Group C will take on the number two seed from Group D. At the time of writing, that spot would go to FC Tulsa. The easiest way for United to make that happen is simple.

They need to win out.

There are plenty of other possibilities that it could happen, but that’s the clearest path. The goal, of course, being finishing ahead of El Paso. United has a chance to force the issue over the next two matches with pairings against Colorado Springs Switchbacks FC and Rio Grande Valley FC. Against the Switchbacks, United will get a ‘home’ match for the first time this season.

That ‘home’ match is coming at the cost of renting out Weidner Field and only being able to bring up to 1,000 supporters to Colorado Springs.

With this weekend’s match being the only one that United can call a ‘home’ match this season, the club and it’s supporters will want to do everything they can to make the most of it. It may not take much, given the history of the series between the two clubs. In six prior meetings, the visiting Switchbacks have only ever taken one point off of United. That lone point came in the most recent meeting, one in which United did not play well and saw Ryan Williams sent off.

United can’t afford to fall into the same mistakes that they did in the last match. In order to take the full three points from the Switchbacks once again, they need to control the midfield. Andrew Tinari and Williams both got into trouble early during their time on the pitch a few weeks ago, and they couldn’t be as aggressive as they typically could. Tinari and Juan Pablo Guzman have both been instrumental in United’s wins this season. A strong performance from both of them and United will be undefeated at ‘home’ this season.

Amando Moreno – Moreno’s streak of consecutive matches with either a goal or an assist continues to grow. Last week, his instincts guided him as he carved up the Monarchs with a brace. He could easily find himself in the same situation this week.

For the Switchbacks, it’s time to look forward. After another disappointing season, all that’s left is to play for the future. And that’s what could make them dangerous. Without any hope of making the playoffs this season, there’s a high probability that they may play a number of younger players in an attempt to get them some match experience. If that’s the case, then United may not know who to prepare to face on the pitch.

The other possibility is that Colorado comes out and plays as they did in the last meeting. Their previous style of play caused visible frustrations in the United players. That frustration manifested in yellow cards for Tiniri and Williams. If the same thing happens again, there’s a chance that Tinari or Guzman could pick up their fifth yellow of the season. Fans of soccer know that a fifth yellow means a one-match suspension. This time of the season, United cannot afford to lose anyone.

Aidan Daniels – It was Daniels’ shot that pulled the Switchbacks level in the last match, and his name had been heard plenty of times before that. With the ability to work outside the box, it will take United’s midfield dropping back to help contain him this weekend.

New Mexico United’s first ‘home’ match of the season is scheduled for a 3:30 p.m. (MT) kickoff from Weidner Field in Colorado. The match will be streamed live on ESPN+ domestically and on YouTube for international viewers. Locally the match can also be heard on ESPN Radio 101.7 The TEAM, via The TEAM app, or The TEAM website. Spanish language commentary will also be available on La Zeta 106.3 FM.