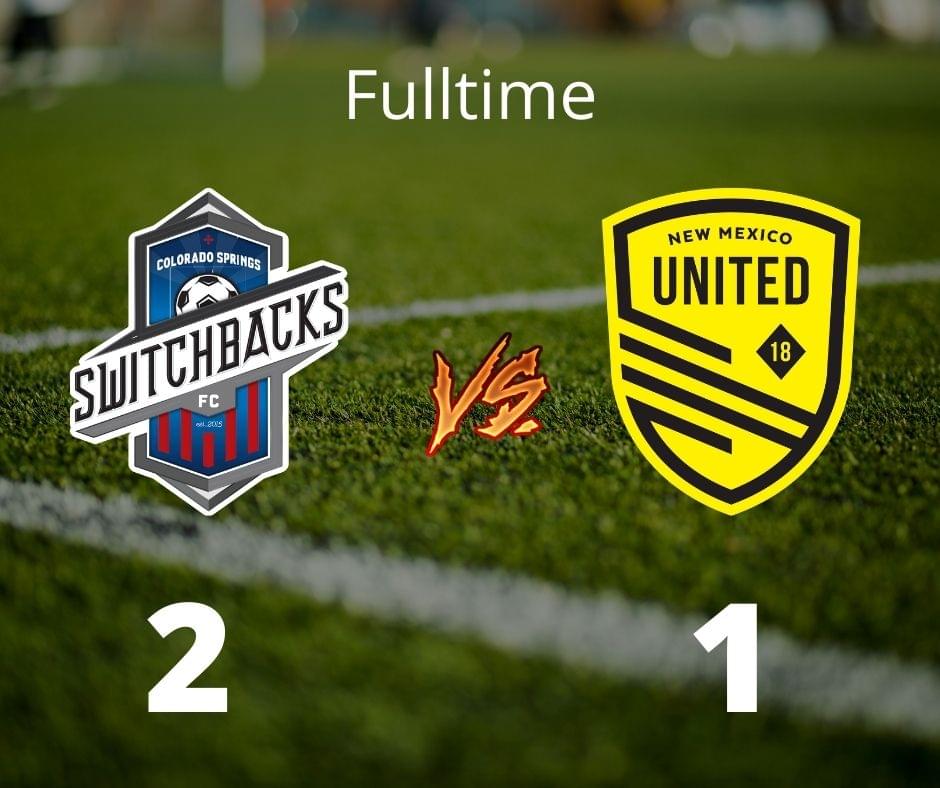 Today’s match for New Mexico United didn’t go according to the script. In what was likely their only ‘home’ match this season, a first half lead wasn’t enough as Colorado Springs Switchbacks FC came from behind to secure their second win of the season.

The action started early, with both sides attempting to move the ball quickly around the pitch. Just as the close entered the ninth minute, United believed they had earned a free kick right at the edge of the box. A long ball from Kalen Ryden was corralled by Switchbacks keeper Abraham Rodriguez, appearing to have controlled it with his hands outside of the 18-yard box. The center referee signaled for play to continue, however, and the two sides continued to go at it.

In a change from the previous meetings, both sides played with a high line, trying to press the other into a mistake. The early pressure from United resulted in two attempts in the 15th minute, the first was blocked by a Switchback defender, but the clearance stayed with United. With the second attempt, Chris Wehan took a shot on a volley, but the ball went well over the goal.

Minutes later, the ‘visitors’ had a chance to open the scoring with an attack of their own. After collecting the rebound from a George Lebese attempt, Joao Cervos sent in a cross to an unmarked Christian Volesky. Volesky attempted a bicycle kick, but the shot went wide of goal.

United would go on to be the ones to break the scoreless deadlock. In the 28th, a mistake from Colorado Springs would result in them falling behind. A poor clearance left the ball inside the box where Josh Suggs was able to get it to Amando Moreno. With a sliding attempt, Moreno sent the ball towards goal, but it was deflected by Rodriguez. Unable to control it, the ball fell to Devon Sandoval, who was waiting just two yards away from goal. With a tap in, Sandoval notched his fourth goal of the year.

Over the next ten minutes, United would find themselves with multiple chances to double their lead. Wehan and Andrew Tinari would both have shots saved. Sandoval would have a chance inside the box but was unable to control the ball long enough to get a shot off.

Just when it looked like United was going to carry the lead into the break, Lebese was able to draw a penalty call. As he ran into the box, Lebese appeared to play the ball off to his right before tripping over Cody Mizell’s outstretched arms. The referee believed that there was a foul committed and pointed to the spot. Volesky was given a chance to take the attempt and beat Mizell by going into the bottom right corner.

Once again, the beginning of the second half would find a way to be a negative for United. Less than three minutes into the half, Luke Ferreira would put Colorado Springs ahead. Aiden Daniels took the ball along the edge of the 18-yard box, and just past the center, he would give up the ball to Ferreira. The midfielder let loose with a low, driven shot with his right foot that flew past Mizell and into the net.

As time passed in the second half, United tried to press the issue. No matter what they did though, they weren’t able to put the ball into the net again. They put in another ten shots, but only three of them were on target. Time after time, their attacks would work their way into the final third, but were either stifled by being off-target or failing to get a call to go in their favor from the referee. When the final whistle blew, Colorado Springs collected their second win of the season and their first ever against New Mexico.

Chris Wehan – Despite the loss, Wehan had a productive day at both ends of the pitch. 2 shots on target, 2 chances created, 1 tackle, 1 block 1 interception was his state line at the end of the match.

With the loss, United’s path to the number one seed in Group C becomes a lot more difficult. After El Paso won later in the evening, even if United wins out, they’ll need help from either Colorado Springs or Real Monarchs. At least one of those two clubs will need to find a way to take points from the Locomotive.

The final three matches for United start on Wednesday night, September 23 against Rio Grande Valley FC. That match is scheduled to take place in Edinburg, Texas with the kickoff time yet to be determined.