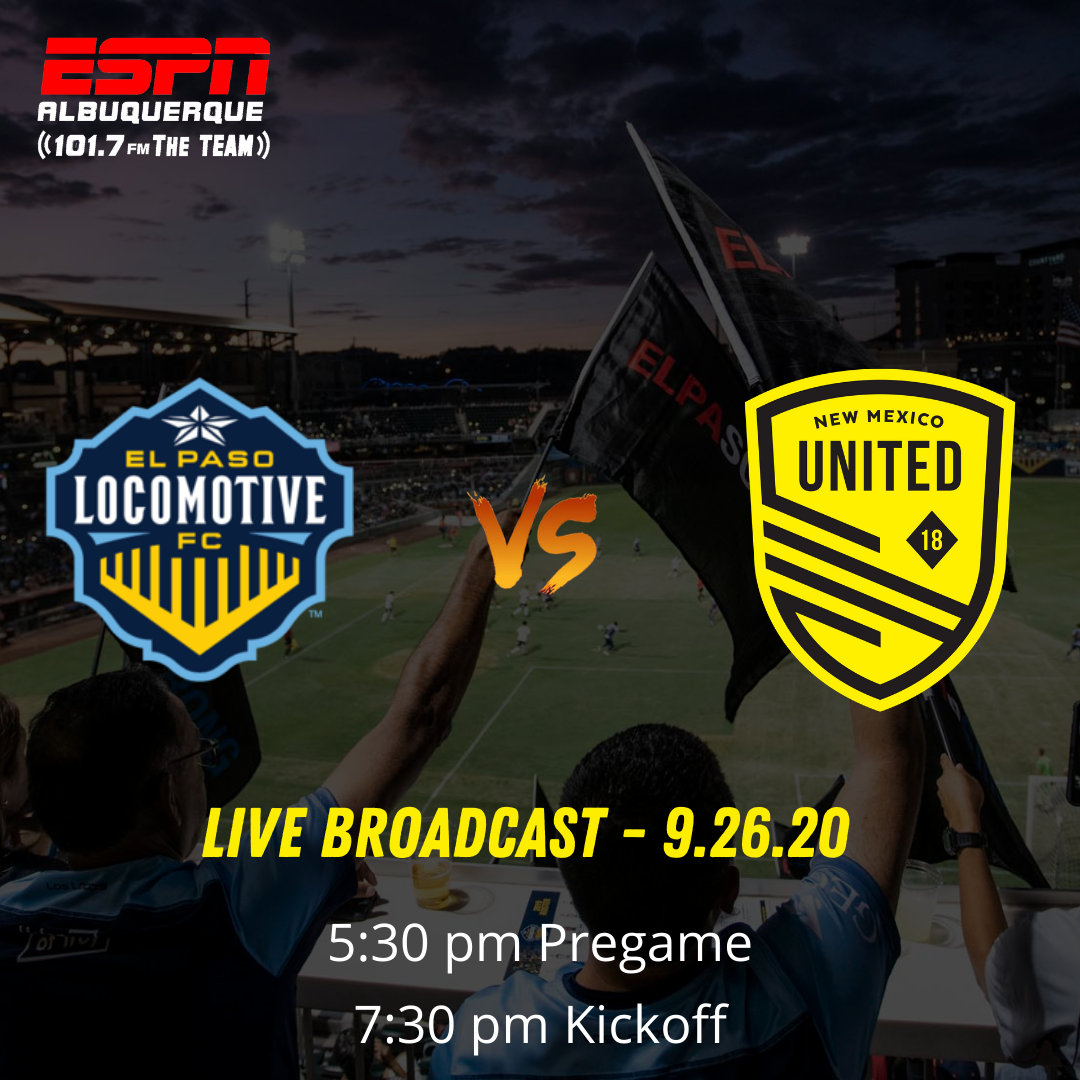 The window of opportunity for New Mexico United to retake first place in Group C is rapidly closing. With potentially only two matches remaining left in their season schedule, there is a possibility that the group may move to a points per match format to determine seeding for the playoffs. The league has already done so in part of the Eastern Conference due to Loudon United FC canceling the remainder of their season. With Rio Grande Valley FC facing the possibility of not being able to schedule all of their postponed matches, it could happen in the Western Conference as well.

Until the league and RGV make a decision on their remaining matches, United’s goal remains the same. They have to win out to give themselves the best possible chance at finishing on top of the group.

This Saturday’s match is by far their toughest remaining test. For the fourth and final time in the regular season, United heads down I-25 to face off against El Paso Locomotive FC. The three earlier meetings this season have resulted in the matches being split between the two clubs, each as a win, and the third was a draw. In the most recent of those matches, El Paso finally picked up their first win against United with a 3-2 win at Southwest University Park.

United was in had the lead for much of the match until losing it on an own goal in the 60th minute. The Locomotive eventually took their first lead of the match with only two minutes left in regulation and held on to win. That win for El Paso moved them ahead of United in Group C and since then has extended their winning streak to five matches.

In their last match, El Paso defeated Real Monarchs SLC by a final of 1-0. That result, paired with United’s loss to Colorado Springs, extended the Locomotive lead to four points. El Paso has been playing their best soccer of the year over the past month and appear to have hit their stride at the right time.

While they haven’t been dominant, they have found ways to win. Their high press has been more effective, and their ball movement has been good. They are doing what good clubs have to do in order to secure three points.

Logan Ketterer – While Ketterer is the clear number one for the Locomotive, he isn’t without his flaws. When under pressure, Ketterer has shown that he can be flustered at times and makes mistakes. United has been able to take advantage of that in the past and can do so again.

As the longest road trip in the USL begins to wind down, United is looking to both make a run at first place, but perhaps more importantly, build momentum heading into the playoffs. Last year United ended the season on a less than impressive run of matches, and perhaps that played a role in their early exit from the playoffs. This season the club has a chance to change that. If all the chips fall in their favor, then United could be playing against Austin Bold FC or FC Tulsa instead of San Antonio.

After an unexpected full week off, United should be rested as much as they can be having to travel for the entire season. With rested legs and the specter of a rivalry match, United shouldn’t have a problem getting up for this match. This series has always been contentious, and this season has been no different. Each match this year has featured no fewer than five yellow cards.

United will need to do what they do best; play a high line, build up out of the back, and control the midfield. They’ll also need to do better defensively. In recent matches, there have been issues with United not being able to close down on opponents and have conceded goals as a result. If they can improve upon this, their chances will improve drastically.

Kalen Ryden – Ryden’s skills will be fully tested this week against an inform Locomotive club. Keeping Omar Salgado off the score sheet and controlling the box will be paramount to United earning all three points.

Saturday night’s match is scheduled for a 7:30 p.m. (Mountain) kickoff from Southwest University Park in El Paso. The match will be streamed live domestically on ESPN+ and internationally on YouTube. The match will be broadcast live on ESPN Radio 101.7 The TEAM, via The TEAM app, or The TEAM website. Spanish language commentary can be heard on La Zeta 106.3 FM.