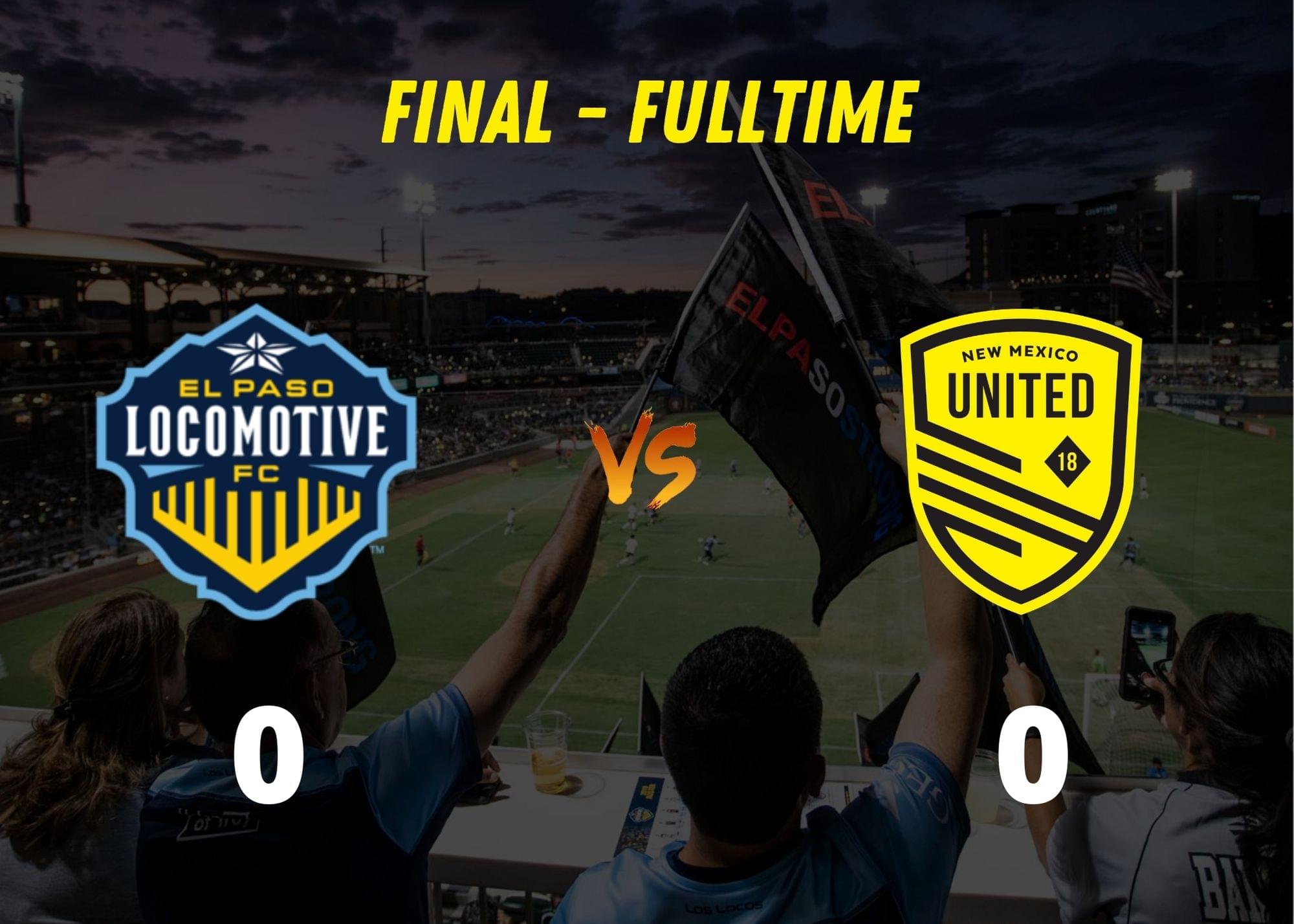 In a must-win match for New Mexico United, the night got off to a rough start. Their hosts for the Saturday night tie, El Paso Locomotive FC, went off the crossbar and the left post within the first three minutes of the match. First, it was Omar Salgado taking a shot on the volley that went off the crossbar, and then it was Mechak Jerome from a free-kick opportunity putting it off the outside of the left post.

El Paso’s early match dominance continued with another rapid succession of shots. Twice within the fifth minute, they would put two more shots close to finding the net. Aaron Gomez would get service good enough to give him two opportunities to head the ball towards goal. The first he managed to miss wide left, the second was delivered from close range and glanced off the bottom edge of the crossbar. Cody Mizell was able to get a hand to it off the rebound and push the ball clear of danger.

Salgado would later go down with an apparent injury in the 17th, appearing to hurt either his knee or ankle after getting tangled with Austin Yearwood. Unable to continue, Salgado would be replaced by Leandro Carrijo.

Coming out of the hydration break, United was still trying to find a foothold in the match. Locomotive, on the other hand, was still putting heavy pressure in United’s defensive third. That pressure would give Gomez an opportunity from 20 yards. With a strong left-footed shot, he forced a diving save out of Mizell.

Throughout the half, El Paso controlled possession and limited United to only two shots. El Paso out pressed United and was able to close down on their counterparts much quicker than the visitors could. It wasn’t until deep into stoppage time that United was able to put a shot on target. Devon Sandoval was able to put a powerful header towards goal, but it went straight to Logan Ketterer.

As the second half began, the Locomotive wasn’t initially pressing as high, but United still wasn’t able to make an impression on the match. In the 51st, United found a way into the final third and earned a foul just outside the box. Chris Wehan stood over the ball and put a shot just over the bar and out of play.

In the 58th, United came close to breaking the deadlock when Amando Moreno tried a header of his own. The attempt went off of the arm of Locomotive defender Yuma, but no handball was signaled by the referee.

The later the match went, the more United appeared to feel comfortable, and they found themselves in the final third more frequently than in the first half. It wouldn’t be until stoppage time that they had a truly dangerous attempt on goal, though. Just as the clock crossed into the third minute of stoppage time, United appeared to put the ball into the net for a late winner. Daniel Bruce played the ball across the box, with both Josh Suggs and Kalen Ryden in an onside position. Suggs would play the ball back toward the middle of the box where Ryden tapped back to him and then into the net. Unfortunately, Suggs was ruled offside, and the goal was disallowed, ending the match in a draw.

Cody Mizell – Commanding the defensive unit to their fifth clean sheet of the season, Mizell made some impressive saves to keep the Locomotive out of the back of the net.

United’s path to the top of Group C isn’t any clearer after the draw in El Paso. They have to win out and get some help along the way. At this point, they have two possible matches remaining, the first of which will be on Wednesday, September 30, against Real Monarchs SLC.