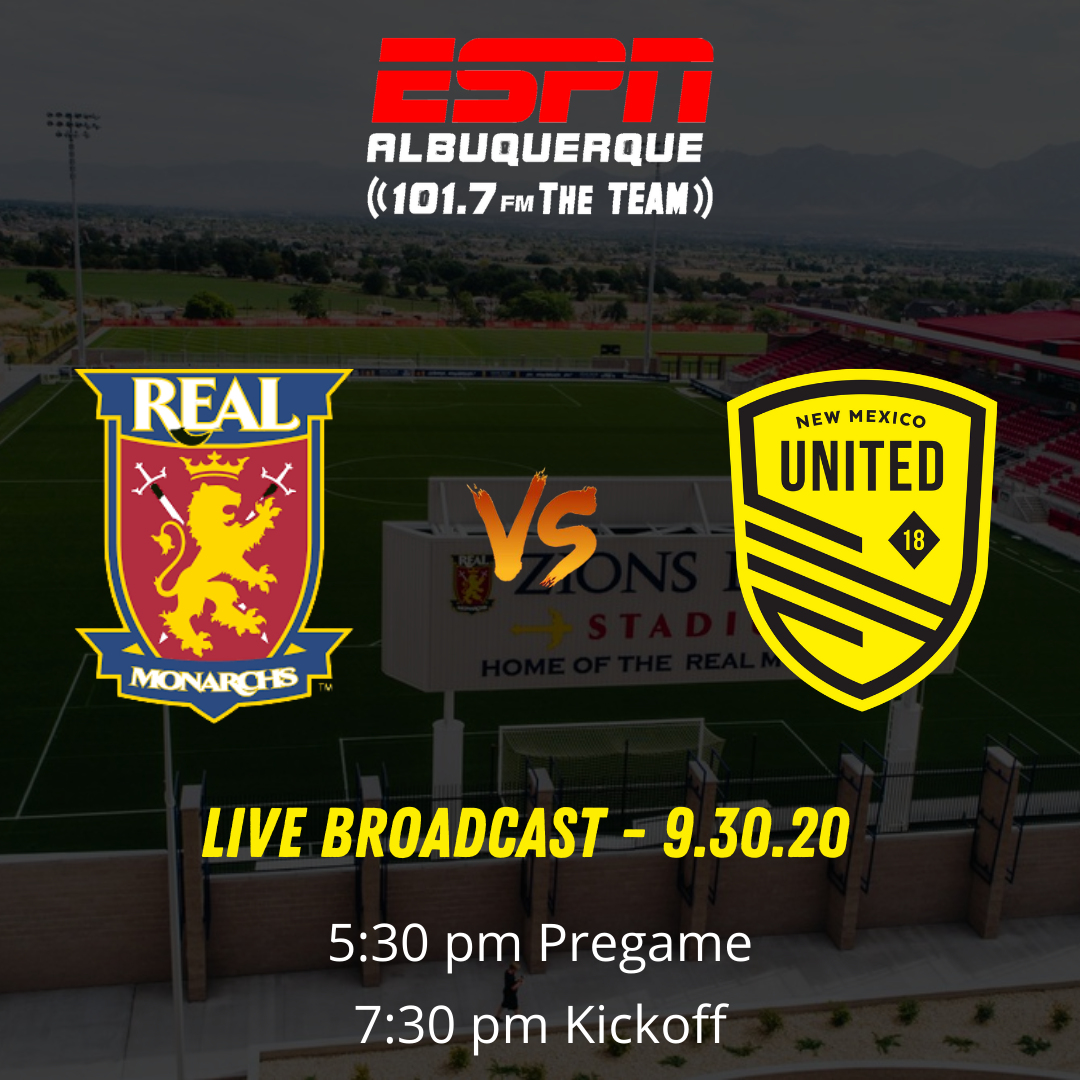 In what may likely be the final regular-season match for New Mexico United, the club is off to Herriman Park to once again face Real Monarchs SLC. The two clubs have met three times already this season, and each time, United has come away with three points.

With only one or two matches remaining, it is crucial that United pick up as many points as possible. Heading to Herriman may be the best-case scenario for the club based on the match history this year. In those three matches, United has hung six goals on the Monarchs while allowing only one goal and picking up two clean sheets along the way.

There’s something about Herriman that seems to bring out the best in Amando Moreno and Chris Wehan. The duo has combined for eight goals and assists in their previous trips and will be looking for more on Wednesday night. United has shown an ability to break down the Monarchs’ back line and put pressure on goal time and time again.

When it comes to the match on Wednesday, United will need to do what got them to this point. The Monarchs have not been able to figure out how to beat the press designed by Troy Lesesne, and United will need to rely on it again. The press from United has repeatedly led to mistakes from opposing clubs and created chances in the attacking third. The other thing that United needs to do in this match is to continue to close down in the defensive third. The Monarchs have struggled to score all season long, and by being closed down, it will make it that much more difficult on the hosts.

For the Monarchs, it’s been a season of disappointment. They came into this season as the reigning USL Champions, but have performed far from it on the pitch. Having been eliminated from the playoffs a few weeks ago, they’re playing at this point to develop their future and that of Real Salt Lake.

Despite having only three wins this season, they are still capable of pulling out a result. They showed that back on September 9th when they put four goals on the Colorado Switchbacks. There’s no denying that they are a talented club and with a win or draw on Wednesday, they would reduce United’s chances of retaking first place in Group C to zero.

Kyle Coffee – Coffee was a player to watch earlier in the season and now leads the club in scoring with three goals. He is also second on the Monarchs with 11 chances created. Given time and space, Coffee could be dangerous.

Amando Moreno – At this point, naming Moreno is almost second-nature. He’s shown the USL and potentially other leagues what he can do, and do it at a high level. Watch for Moreno to put constant pressure on whoever the keeper is for the Monarchs throughout the match.

Wednesday night’s match is scheduled for a 7:30 p.m. (Mountain) kickoff from Zion’s Bank Stadium. The match will be streamed live on ESPN+ for domestic viewers and on YouTube for international viewers. The match can also be heard locally on ESPN Radio 101.7 The TEAM, via, The TEAM app, and The TEAM Website. Spanish language commentary can also be heard on La Zeta 106.3 FM.