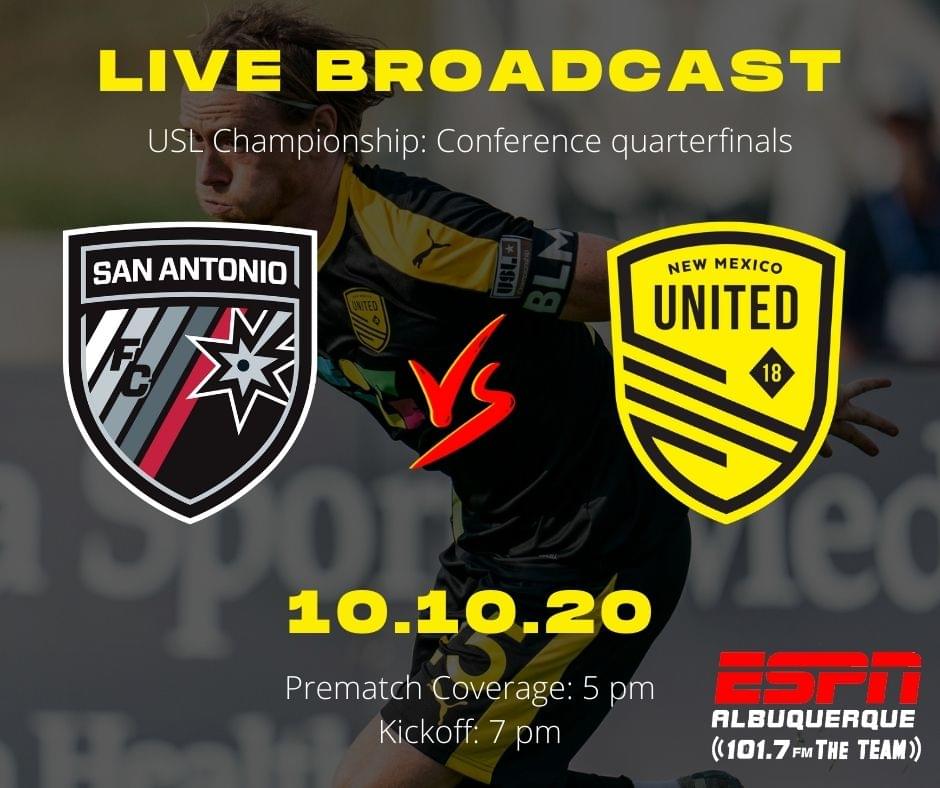 As the calendar turns to October, the USL Championship turns its attention to the playoffs once again. This year, there was no question about whether or not New Mexico United would make it. The club clinched their spot weeks ago, leaving only who they would face off against up in the air.

With the results from the final week of the regular season, the playoff picture finalized and United learned that they would once again be on the road. For the first time this season, United will play against San Antonio FC, the winners of Group D. The two sides have met each other twice before, both matches taking place in 2019. Each club won one of those matches, with both clubs earning a clean sheet on their home pitches. United won at Isotopes Park by a final of 3-0, and San Antonio won at Toyota Field 5-0.

It’s hard to compare the two clubs head to head, having not played each other yet this year. Troy Lesesne hasn’t changed his game plan much all season long, relying on the press and playing the long ball in order to try and find holes in opposing clubs. As the season went on, the press didn’t appear to be as effective as it did early on. Perhaps it was due to the quick turnaround time between matches making the legs weary, but now that that club is coming off their longest period of rest since the beginning of the season, it could be much more effective on Saturday.

Having ten days off should also give United a chance to get fully healthy. One player in particular that will benefit from the time off is Devon Sandoval. Over the last month or so, Sandoval has been dealing with a back injury that has caused him to miss some playing time. His understanding of which lane to try and cut off makes a big impact.

The key for United in the attacking third will be getting Chris Wehan and Amando Moreno involved early and often. Through the middle part of the season, the duo was on fire and carried the club. In the final weeks of the regular season, though, they’ve cooled off some. When they are getting enough service, they are able to split opposing defenses and open spaces to put shots on target.

For as good as they’ve been in the attacking third this year, United has been even more impressive in their defensive third. Having featured three players at the back, the defense is much improved over the inaugural season. Those improvements resulted in the club allowing only 17 goals and notching six clean sheets, a club record. This match will likely be the toughest test United has faced so far this year and will need to contain both Luis Solignac and Cristian Parano. The MLS veteran Solignac led San Antonio in scoring this season with eight goals to his name, making him a threat every time he touches the ball.

Amando Moreno – Since joining the club, all Moreno has done is be dangerous. Whether he is creating chances for others or taking them himself, Moreno always seems to find a way to pressure opposing keepers.

Matt Cardone – The San Antonio keeper has played well this season, earning seven clean sheets across the campaign. One of the veterans of the squad, his leadership will be needed on a club with several players making their post season debut.

Saturday’s match is scheduled for a 7 p.m. (mountain) kickoff from Toyota Field in San Antonio. The match will be streamed live on ESPN+ for domestic viewers and on YouTube for international viewers. The match can also be heard on ESPN Radio 101.7 The TEAM, via The TEAM app, or website. Spanish language commentary will also be available on La Zeta 106.3 FM.