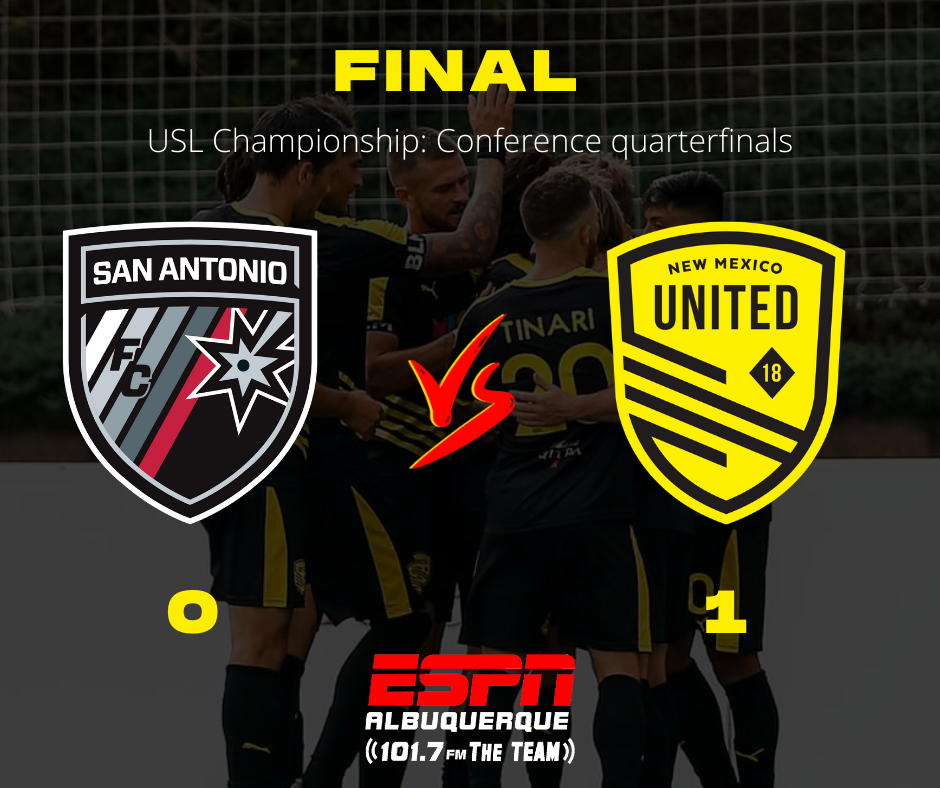 For the first time in club history, New Mexico United is moving on to the Western Conference semifinals. Tonight’s match certainly wasn’t easy, and there was some controversy, but in the end, United walked away with a 1-0 win over the Group D winners, San Antonio FC.

After ten days off, Troy Lesesne’s club looked fresher than they have since the first month of the season. For the opening thirty minutes of the match, United was in full control of the match. Coming into the match, San Antonio had been one of the highest-scoring clubs in the Western Conference. United held them to a total of seven shots in the first half. Of those attempts, only three of them were on target. The first half was the closest that the hosts would come for the entire match. United was methodical and patient in their approach, and they came close to opening the scoring multiple times before the break.

The flow of the match didn’t change much after halftime. United continued to press their advantage and tried to put the hosts even more on their back foot. While it was effective to an extent, something else happened. Some early fouls called on either side ignited some tempers between the two sides. The longer the match went without a score, the more heated the match became.

Despite the best efforts from both clubs, neither of them could break the deadlock before the end of regulation. In the USL playoffs, if the match is tied at the end of regulation, the match then moves to extra time. Ten minutes into extra time, the score was broken open by United. Playing the ball in the attacking third, Chris Wehan was able to take possession and with a volley over the head of a San Antonio defender to himself. Cutting back into the middle of the box, Wehan took the ball onto his left foot and put an off-balance shot into the bottom right corner of the goal.

From there, the match became even more contentious. United was doing everything they could to hold possession while San Antonio was trying to find a way back into the match. Over the next fourteen minutes, the referee issued seven yellow cards between the two sides, one of which came after Victor Giro took down Devon Sandoval from behind and then stood over Sandoval, who was lying on the ground. Once the referee finally regained control of the situation and play resumed, the match remained in control of United. With San Antonio unable to find an equalizer, United was able to finally celebrate their first playoff win.

Cody Mizell – Midway through the first half, Mizell made a number of spectacular saves to prevent San Antonio from getting on the board. All season long, Cody’s skills have been on display, and his play tonight earned himself the 7th clean sheet of the season.

As the result of the other matchup between Groups C and D came in, United found out that their opponent in the Western Conference semifinals will be El Paso Locomotive FC. The pairing will be the fifth time that the two clubs will have met this season.