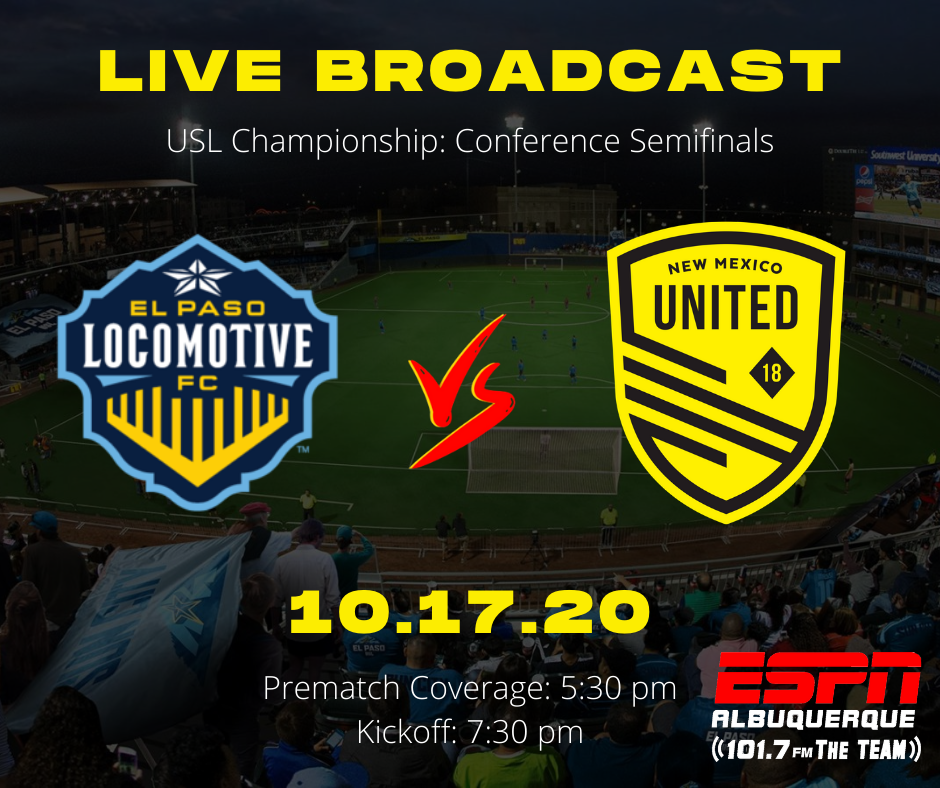 After picking up the first playoff win in club history, New Mexico United is ready to take the next step. That next step once again has to happen on the road with the club traveling to El Paso for their fifth time this season.

All season long, the two clubs have gone at each other, and both managed to earn themselves a spot in the playoffs. In their quarterfinal match against FC Tulsa, El Paso Locomotive FC squeaked by on penalties. Locomotive took an early lead, only to surrender it minutes later. They would go on to fall behind just after the hour mark and had to work their way back into the. El Paso would even go up a man in extra time but couldn’t find a later winner.

At the same time, United went into San Antonio and produced what was seen by many as the biggest upset of the 2020 playoffs. San Antonio had been heavily favored but didn’t look like it on the pitch. United dominated possession from the start and was able to find a winner in extra time. That goal, however, was a source of controversy that could potentially be a distraction for the club. No matter how the goal is viewed, it was a well-worked attempt by Chris Wehan, and the centre referee awarded the goal to United, securing a trip to the Conference Semi-finals.

This series has a history of physicality, producing a number of yellow cards in every meeting. If the match against San Antonio was any indication of what this club was capable of doing, the match against El Paso could see a color other than yellow being shown.

For United, this match is an opportunity to put missed chances and mental lapses from earlier this season behind them and write a new chapter. To do that, they’ll need to focus on two areas of play. The first is to force El Paso’s defensive line and keeper into mistakes by using the press. The other will be to control the midfield. By doing that, United will prevent El Paso from creating opportunities for players like Aaron Gomez and others.

Leandro Carrijo – Carrijo is coming off of one of his best performances of the season, notching a brace against FC Tulsa. What remains to be seen about Carrijo is whether or not he can put together consecutive strong performances. He’s capable but will face a tough test in a United defense that has earned seven clean sheets this season.

Amando Moreno – Once again, Moreno is a player to keep eyes on. After a quiet night in San Antonio, Moreno will be looking to get more involved in the match. When he’s involved in a scoring play, United’s results tend to be positive. Moreno is a catalyst for United’s attack and creates issues among opposing defenses.

Saturday night’s match is scheduled for a 7:30 p.m. (MT) kickoff from Southwest University Park in El Paso, Texas. The match will be streamed live on ESPN+ for domestic viewers and YouTube for international viewers. The match will also be broadcast live on ESPN Radio 101.7 The TEAM, via The TEAM app and website.