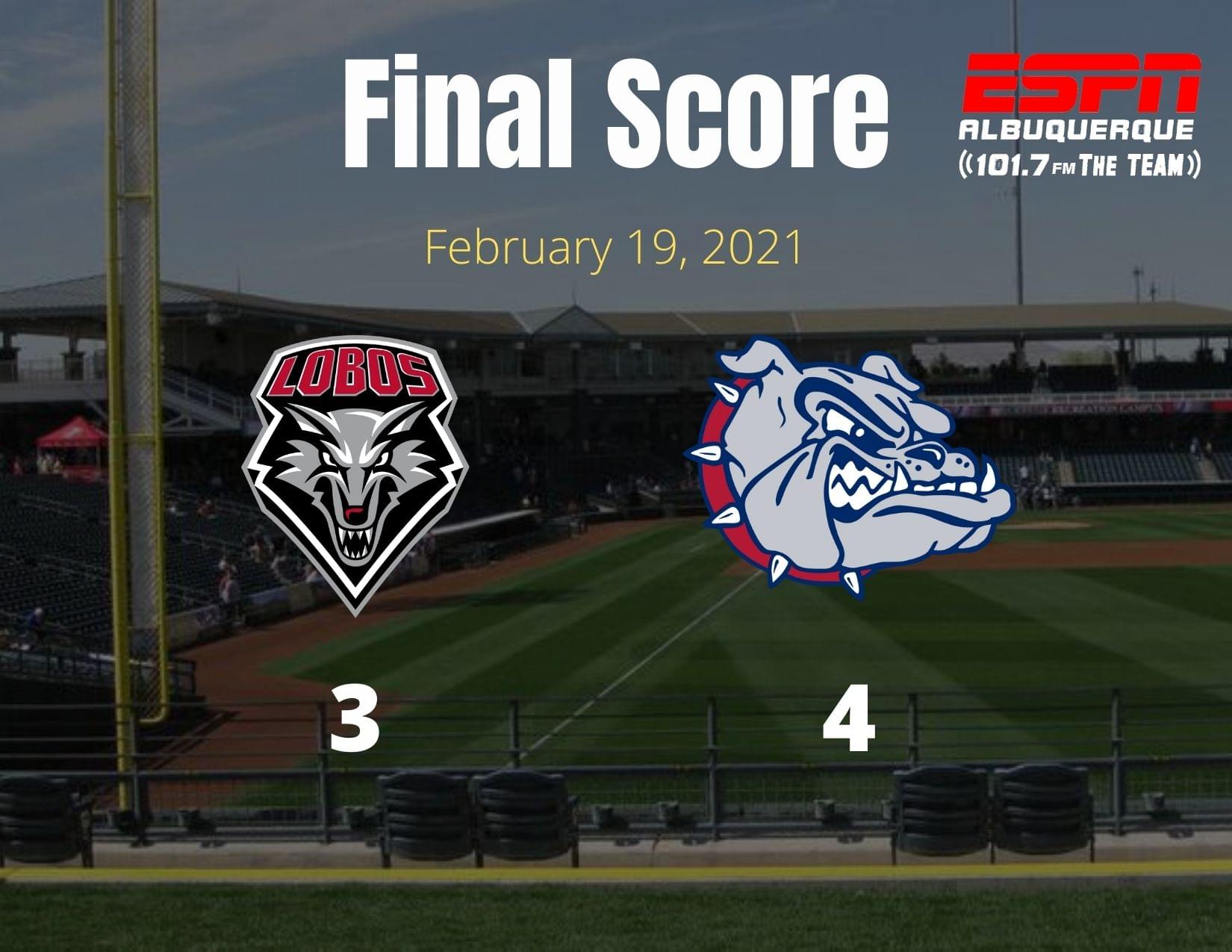 For the fourth straight season, the University of New Mexico Lobos kicked off their season in Surprise, Arizona, as part of the Sanderson Ford College Baseball Classic.

The Lobos won two of four games in the classic last season, with a pair of wins over BYU before falling just short in the final game of the tournament against Gonzaga. UNM would win 12 of their remaining 14 games before COIVD-19 forced an early cancellation of the season.

The Bulldogs scored a pair of runs in the 9th inning of last year’s matchup to shock the Lobos and secure the 5-4 win.

As the great Yogi Berra once said, it was like Deja Vu all over again for the Lobos, with Gonzaga once again scoring two in the ninth inning on Friday night to take a 4-3 victory.

The Lobos kicked off scoring early, with Mack Chambers scoring on a fielder’s choice. Chambers, a sophomore from Broken Arrow, Oklahoma, opened the season off with a single in his first at-bat in the Cherry and Silver after joining UNM from Seminole St. College.

It was the first of two hits on the day for Chambers, who also flashed his glove with a couple of impressive plays at shortstop.

The Bulldogs responded with a run of their own in the bottom of the frame, with an RBI single by infielder Brett Harris.

The two teams exchanged a pair of scoreless innings before the Lobos opened up a one-run lead when Willie Cano singled back up the middle to plate Castillo. Although the Lobos would end up leaving two players on base in the inning, starter Aaron Makil responded with a nice shutdown inning in the bottom of the fourth to keep momentum with UNM.

Kyler Castillo would hit a laser home run to left field in the top of the eighth inning to give the Lobos a one-run lead with six outs to go. Unfortunately for the Lobos, those final eight outs proved to be the most difficult of the game, and UNM’s bullpen imploded down the stretch.

Three walks and a critical error in the final two innings proved to be the deciding factors in the game. Payton Strambler did a fantastic job of getting out of trouble with a strikeout to end the eighth inning, but he walked two batters, and the leadoff hitter reached on an error in the bottom of the ninth.

Furious with some questionable ball and strike calls that did not go his way, UNM head coach Ray Birmingham was ejected in the ninth for arguing with the home plate umpire.

With one out and the bases loaded, Isaiah Campa relieved Strambler with UNM clinging to a one-run lead and the tying run just 90 feet away. Campa would end up hitting Brett Harris for the fifth hit-by-pitch by Lobo pitchers on the night, sending home the tying run from third.

The Bulldogs would plate the game-winning run on a fielder’s choice by Andrew Orzel, completing the comeback and the second devastating loss in consecutive years for the Lobos.

On the bright side for UNM fans, starting pitcher Aaron Makil pitched a solid game with six innings of four-hit baseball and shortstop Mack Chambers impressed both at the dish and with his glove.

UNM will look to bounce back tomorrow against Oregon State, who lost to Kansas State 3-2 on Friday.

Tune in tomorrow to hear all of the exciting action from Surprise, AZ. Listen on-air, online at www.1017theteam.com, and on the TEAM App.