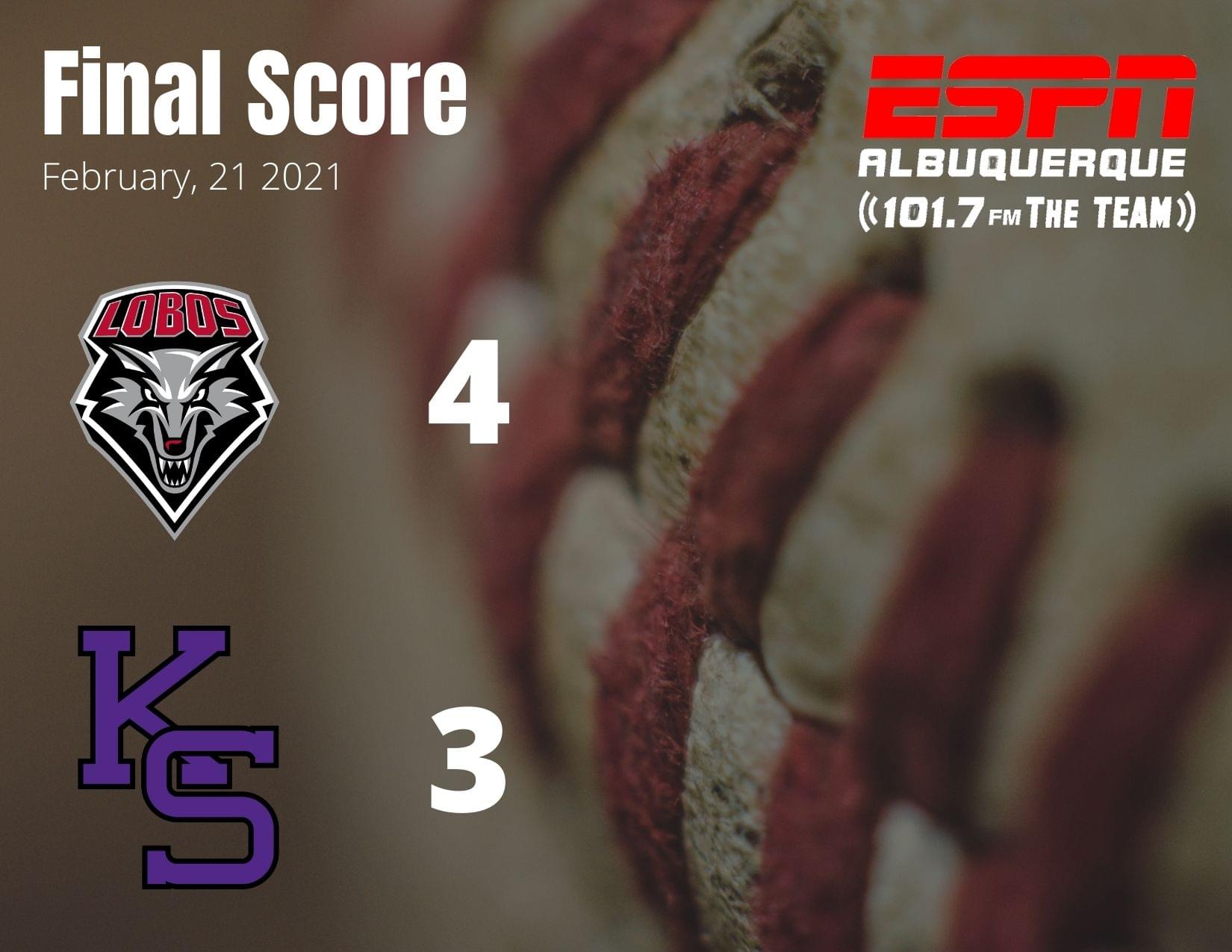 The New Mexico Lobos entered Sunday’s game against Kansas State, licking their wounds after a bullpen implosion against Gonzaga on Friday night and a 14-1 drubbing on Saturday against Oregon State.

The Lobos would be without their manager Ray Birmingham, who was serving a two-game suspension for his ejection on Friday night arguing balls and strikes, and K State, despite a lopsided loss to Gonzaga on Saturday, defeated the same Oregon State team that dismantled the Lobos when the Beavers and Wildcats played on Friday.

After managing just one run through the first seven innings of play, UNM scored three runs in the final two frames, including a walk-off, game-winning hit by Mack Chambers in the bottom of the ninth to give UNM a 4-3 win. Cole Posey would score on the play at the plate on a throwing error by second baseman Daniel Carinci.

For the second time in three days, the Lobos played in a close game that ended on a walk-off. But this time, it was the Lobos in their turquoise jerseys rushing the field and celebrating on the diamond.

Tristin Lively, a 6-0, 185 pound junior from Las Cruces, NM, would take the mound for the Lobos, tasked with slowing down a potent Kansas State offense. Lively was brilliant, scattering just three hits in six innings of work to earn the no-decision, with seven strikeouts and one earned run allowed.

Kyler Castillo and Jared Martin each notched two hits to lead the Lobos offensively, with Martin driving in two of the team’s four runs.

The Wildcats were led by starting pitcher Connor McCullough, who dominated the Lobos with seven strong innings of three-hit baseball, with nine strikeouts and two walks.

UNM could not get much going against McCullough but fared much better against the Kansas State bullpen. The Lobos posted two hits and a pair of walks against Tyler Eckberg, including the walk-off fielder’s choice and throwing error that allowed centerfielder Cole Posey to score in the bottom of the ninth.

With the win, the Lobos move to 1-2 on the season and wrap up the four-game Baseball Classic with a rematch against Oregon State on Monday afternoon.

Be sure to catch all of the exciting baseball action on ESPN Radio 101.7 The TEAM. You can also hear the game online at 1017theteam.com and on the TEAM App.