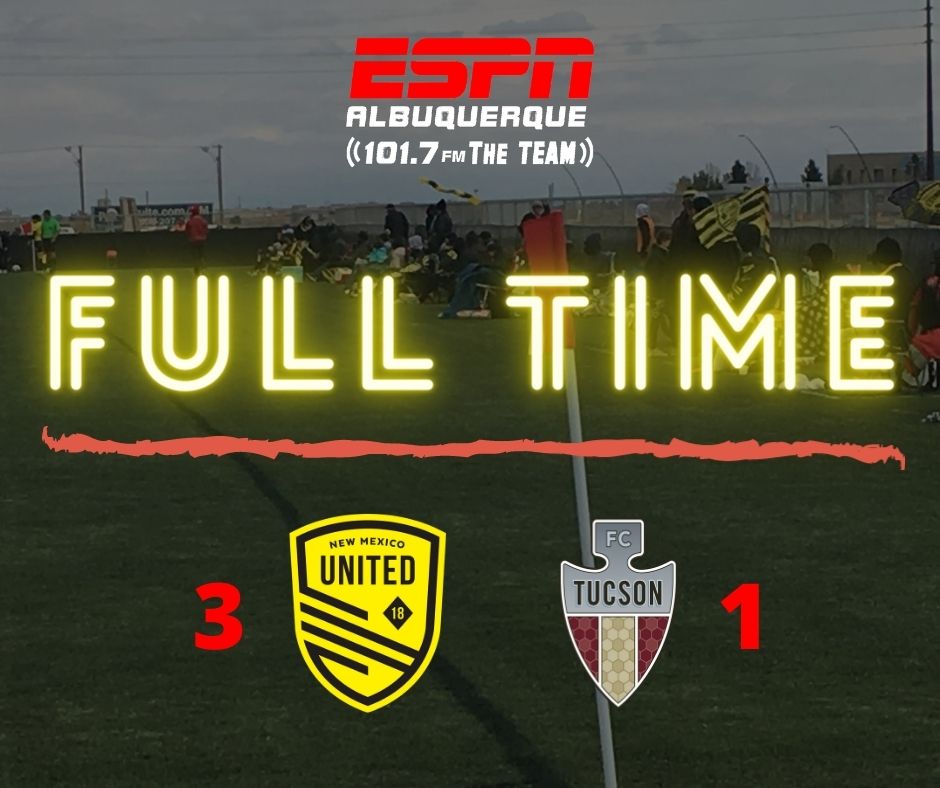 With the visiting USL League One side FC Tucson in town, New Mexico United wanted to close out their home preseason schedule in style. After a slow start, United was able to do just that en route to a 3 – 1 victory.

Many of the players who are believed to be among the starting eleven found themselves on the bench to start the match, with some even getting a day off. The changes allowed Head Coach Troy Lesesne to showcase some of the newer signings and some of the Academy players. After an opening twenty-five minutes that saw neither side able to gain an advantage, it was the black and yellow that struck first.

In the 29th minute, Ilija Ilic sent the ball across the box, and Josh Suggs was able to head home for the opener.

After the ensuing kickoff, United failed to react and allowed the maroon-clad FC Tucson to equalize. Gio Calixtro was able to get in behind Justin Schmidt and squeak a right-footed shot past Philip Beigl.

The scoreline remained even until just after halftime when United pulled ahead again. In the 48th, United won a corner at the south end of the pitch. Isidro Martinez stood over it and delivered an in-swinging ball to the center of the box. On the receiving end of it was Schmidt, whose leaping header was powered into the left corner of the box to retake the lead.

Throughout the second half, United was the more aggressive of the two sides, playing ball after ball down the right-wing trying to target Daniel Bruce. Multiple times that movement gave the home side a good look at goal, and in the 72nd, it paid off again. Taking the ball near the byline, Bruce squared it back up to Amando Moreno in the center of the box, and Moreno capitalized by extending the lead to two goals, 3 – 1.

New Mexico United has one preseason match remaining. On April 24, United will take on Phoenix Rising FC in Phoenix for their final tune-up match.