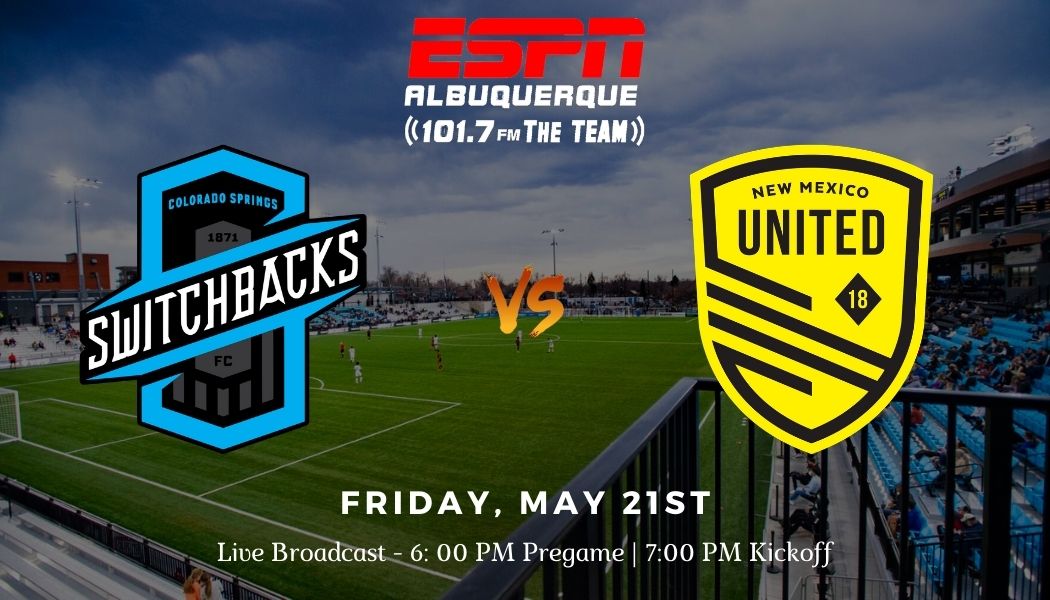 Only days after experiencing their first home match since 2019, New Mexico United (1-1-1) is once again on the road. The destination this week is the brand new Weidner Field, home of Colorado Springs Switchbacks FC (1-1-0).

The Friday night match will be the first for the Switchbacks in the $42 million dollar facility. With a capacity of 8,000, the stadium is an impressive venue. It remains to be seen how much of a factor the capacity itself will play in the outcome of matches, but having a field to call their own in downtown Colorado Springs will certainly boost their confidence.

Colorado Springs will also be buoyed by their recent win over Sporting Kansas City II. Last Friday night, the Switchbacks went into Children’s Mercy Park and hung a four-spot on their hosts. While the performance on the pitch was one of the better ones in recent memory, being awarded two penalties didn’t hurt their cause. Newcomer Hadji Barry claimed two of the goals to open his account with the club.

In the later stages of the 2020 season, the Switchbacks showed signs of improvement and even picked up a win over United. Now, with a largely retooled roster and a new head coach, Switchbacks supporters have a lot to look forward to.

The state of Colorado was essentially home away from home for United throughout the 2020 season. After playing the Switchbacks four times, United earned themselves a record of 2-1-1 en route to making the playoffs once again. With positive results under their belts from 2020, and their first win of the new campaign, Troy Lesesne’s men should be in good spirits.

Last week United showed some of their depth, with three goals coming from three different players. Sergio Rivas, Amando Moreno, and Brian Brown all found the back of the net after United was able to break the press from Austin. The movement from United also showed improvement over the first two matches and created lots of space for the black and yellow to work in.

In the preseason match between the two sides, United had a lot of success playing out of the back with the wingbacks. That movement allowed the strikers to get into dangerous positions and led to a 4-2 win for United.

Brian Brown – After opening his account against Austin, Brown said that he needed more goals. Against Colorado Springs, he’ll have opportunities to add to his tally. Look for Brown to play in a role similar to that of Devon Sandoval and put either himself or others in a position to score.

Friday night’s match is scheduled to kick off at 7:00 pm (MDT) from Weidner Field. The match will be broadcast live on ESPN Radio 101.7 The TEAM, online at 1017theteam.com, and on the TEAM App. You can also watch the game live on ESPN+ for domestic viewers and on YouTube for international viewers.