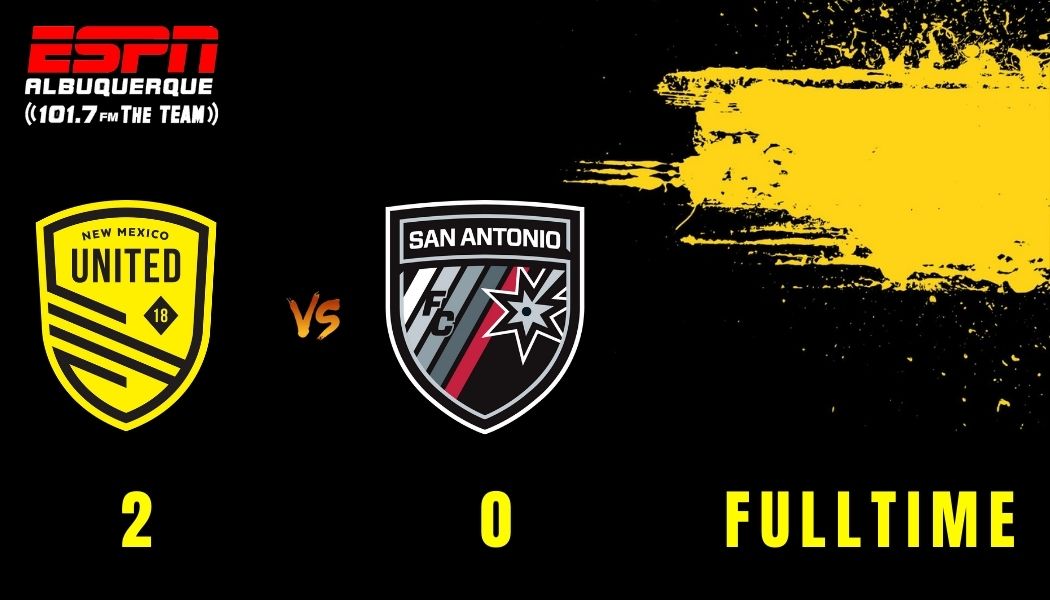 If there were any ill-effects from having to play on short notice, New Mexico United didn’t show it on Wednesday night. They picked up right where they left off against Austin Bold and dominated possession once again.

The difference between Saturday and Wednesday was that United was able to finish against a compact backline from San Antonio FC. While they weren’t lined up in a traditional defensive formation, their gameplan saw their midfielders dropping deep to pack the box. For a time, that strategy kept United out of the back of the net, but it didn’t stop them from dictating the pace of the match.

Much like the prior match, United found themselves with plenty of time to move the ball around, only this time they were asking questions of the defense and San Antonio keeper Matt Cardone from the opening whistle. After a few unsuccessful attempts, Captain Josh Suggs finally broke through for the home side.

In the 33rd, Suggs made his way into the six-yard box and received a pass from Andrew Tinari. Somehow, Suggs remained onside and put a low, driven shot into the bottom left corner to give United the lead. The goal was the first for United since the match against Real Monarchs on June 4th.

Coming out of the second half, United still played like they were on fresh legs and continued to control the pace of play. Their persistent questioning of the San Antonio defense paid off once again in the 52nd.

This time it was Austin Yearwood who made his mark. Taking the ball on the left flank, he feigned to the left, put Sam Gleadle on the wrong foot, and then went back to the right. From outside the box, Yearwood left fly with a curler that found its way into the far side netting to extend the lead to 2-0.

From there, it was just a matter of continuing to control the match and keep the visitors from getting any level of comfort on the pitch. As they made their substitutions, bringing on forwards Nathan and Shandon Hopeau in hopes of pulling even a single goal back, United answered in kind. To counter the fresh legs up top for San Antonio, Troy Lesesne sent in Justin Schmidt and Sam Hamilton to put fresh legs in the defensive third. Lesesne’s decisions were just what the club needed, and along with some great stops by Alex Tambakis, United rode their two-goal lead to a third consecutive clean sheet.

Austin Yearwood – Austin played well at both ends of the pitch against a bigger, more physical side in San Antonio. His stat line says it all; 9 duels won, 3 clearances, 2 interceptions, 1 tackle, and 1 goal.

New Mexico United doesn’t step foot on the pitch again until Friday, June 25th. When they do return to play, it will be against Colorado Springs Switchbacks FC at Weidner Field. The two clubs previously met on May 21, also at Weidner Field, when United walked away with a 3-1 win.