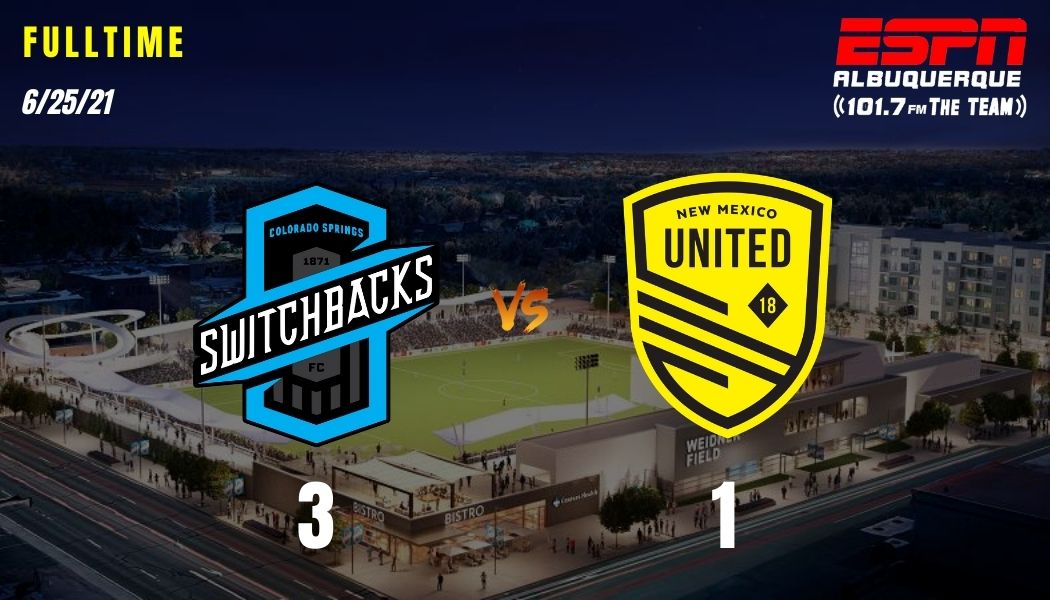 From the opening minute in Colorado Springs, the atmosphere was electric. Lightning strikes in the area sent the match into a weather delay just 85 seconds into the match. Once play resumed lightning continued to strike on the pitch.

In the second minute, United restarted play with a brilliant delivery on a free-kick from Harry Swartz. The ball flew across the box and was put on frame by Kalen Ryden. Between the ball and the goal, however, stood keeper Sean Melvin who prevented United from grabbing the early lead.

Both clubs were willing to show their physicality as they pushed the pace of play. United had the better of the early opportunities but wasn’t able to make anything from them until the 19th minute. After Colorado conceded a corner, Andrew Tinari stood over the ball and a perfect decoy run by Juan Pablo Guzman left Josh Suggs alone at the top of the box. Suggs took the low delivery on his left foot and put a laser into the net that left Melvin flat-footed.

Even with the deficit, Colorado Springs continued to push and show that they weren’t the team of years past. Hadji Barry and Michee Ngalina made multiple runs and were able to link up several times throughout the remainder of the half and after the break. In the 59th Ngalina made his way behind the United defenders, somehow staying onside, and put in a low cross that Deshane Beckford was able to put away for the equalizer.

That wasn’t the last of the Barry/Ngalina show as the two continued to put on a display of pace that United couldn’t keep up with. Ten minutes later, Barry squeezed his way between Ryden and Sam Hamilton to get on the end of a cross from Sebastian Anderson. He was able to get just enough on it to put it into the lower-left corner to take the lead. Barry would go on to add a second goal in the 82nd. Once again he flashed his pace on a break and was played in by Andre Lewis. Ryden attempted to keep pace, but couldn’t get ahead of the Switchbacks forward. Barry would go back across goal with his shot and Tambakis was unable to stop it, giving Colorado Springs a 3-1 lead.

Hadji Barry – Barry was highlighted ahead of the match as a player to watch and he came through in spades for the hosts. The brace extended his goal-scoring streak and lead in the Golden Boot race. His pace was unmatched and paired with Ngalina, the Switchbacks have a dangerous set of forwards.

United returns to action on Wednesday night for the second match of their road trip. Their opponent is the struggling Real Monarchs, who sit at the bottom of the Mountain Division. That match is scheduled to start at 8 p.m. (MDT).