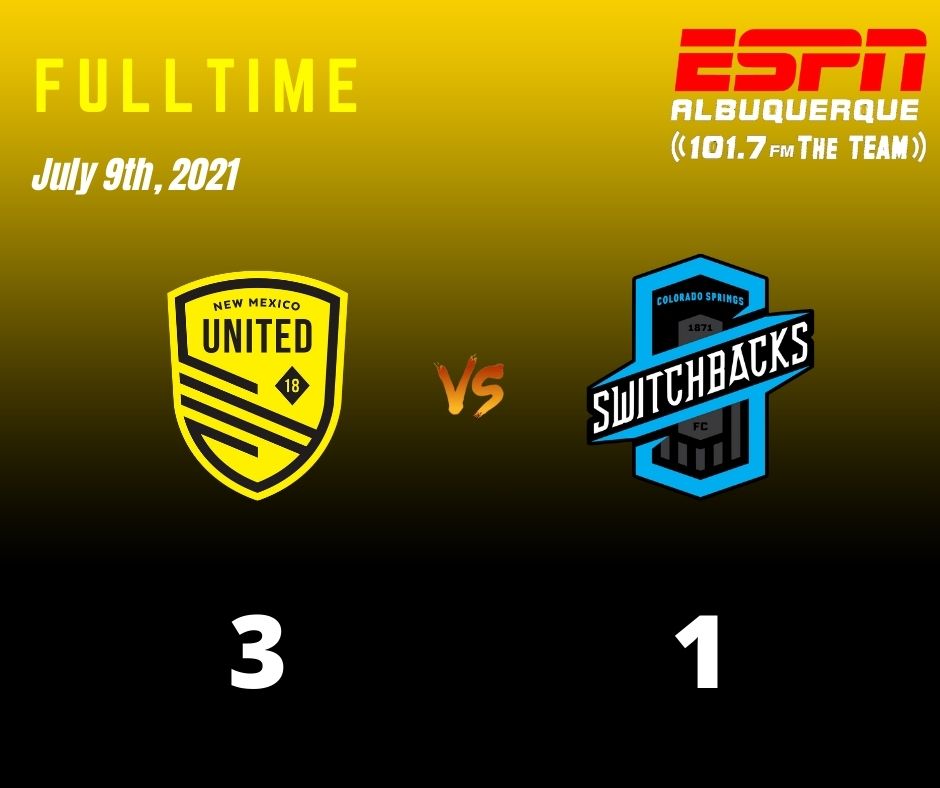 Lightning struck both around The Lab and inside it on Friday night.

New Mexico United’s first match at home during monsoon season started with a weather delay due to lightning in the area and finished with lightning striking twice at the south end of the pitch. The weather delay didn’t diminish the importance of the match or the energy from the two sides.

United was the first of the two sides to get a chance during the match, and it came as a result of a mistake from Switchbacks keeper Sean Melvin. In an attempt to stop an attack from United, Melvin came outside of the 18-yard box to run down the ball. If not for the offside flag going up against Brian Brown, the hosts looked to be through on goal.

Ten minutes later, United won a free-kick inside the Switchbacks defensive half. Standing over it was the club captain, Josh Suggs, who delivered the ball across the pitch to the far post. Kalen Ryden got a foot to it, but his attempt was deflected by Melvin. The deflection didn’t go very far as it fell directly to Sergio Rivas, who found the back of the net in the 16th to give United the lead.

Just past the half-hour mark, Ryden made an uncharacteristic error and gave the ball away in the defensive half of the pitch. The error benefitted the ever-dangerous Hadji Barry, who worked his way into the box and pulled the visitors level.

If surrendering the lead once again wasn’t enough, on the scoring play United midfielder Sam Hamilton came up injured. In an attempt to tackle Barry, Hamilton went down on his left leg and, after receiving treatment from the trainer, was assisted off the pitch and into an ambulance for further tests.

After making it to the break on level terms, the two sides restarted play with an increased feeling of tension. The physicality of the match started to catch up with them and the energy boiled over in the 53rd. Sebastian Anderson was shown a red card after taking down Daniel Bruce from the head and shoulder area, forcing the Switchbacks to play the rest of the way with only ten players.

Despite the man advantage, United had a hard time finding the back of the net. Each attack from the hosts was met by a solid defensive effort from the Switchbacks or was thwarted by an inaccurate pass.

To provide a spark in the attack, Troy Lesesne decided to send on Cristian Nava. In the 71st, the 17-year old Albuquerque native made his professional debut. He played well and made several moves that the more veteran players of the Switchbacks couldn’t track.

With the clock ticking closer to the end of regulation, the head referee decided to add five minutes of stoppage time. It was here that lightning struck. Inside the first minute of stoppage, United won a corner at the south end of the park. Chelo Martinez stood over the ball and sent in a picture-perfect cross. Stepping out of the line and closer to the penalty spot, Michael Azira put a well-placed header into the bottom left corner to secure the lead with his first goal for the club.

Minutes later, Ilija Ilic joined that club as well. Taking possession at the halfway line, United turned towards goal. Once again, Chelo was involved in the attack, this time playing a through ball ahead to Ilic. After working his way past the keeper, Ilic buried the ball into the net from a tight angle to bring the lead to 3-1.

Alex Tambakis – Alex once again showed why he was sought after in the off-season. Credited with another three saves by the league, Alex had another incredible performance and kept United from conceding on several occasions on Friday night.

Troy Lesesne on Sam Hamilton’s injury: “Right now we’re trying to determine exactly what the situation is for him. We don’t have anything definitive right now. But that’s definitely the most important question to ask, and the most important thing on our minds right now. We’re happy about the win, but everyone had the same thought process as you after the game, which is ‘How’s Sam doing?’ We’ll get it checked out. If it’s a break, obviously it may be a longer timeline for him. But we’re hoping it’s just a severe sprain of sorts. But no matter what, he’s going to come through it. He’s going to come through it strong. We got the three points tonight for him. There’s no doubt about that.”

United returns to action on Monday night when they play host to Charleston Battery. Charleston, the former club of Lesesne and Azira, is making their first trip to Albuquerque. That match is scheduled to kickoff at 7:30 p.m. (MDT).