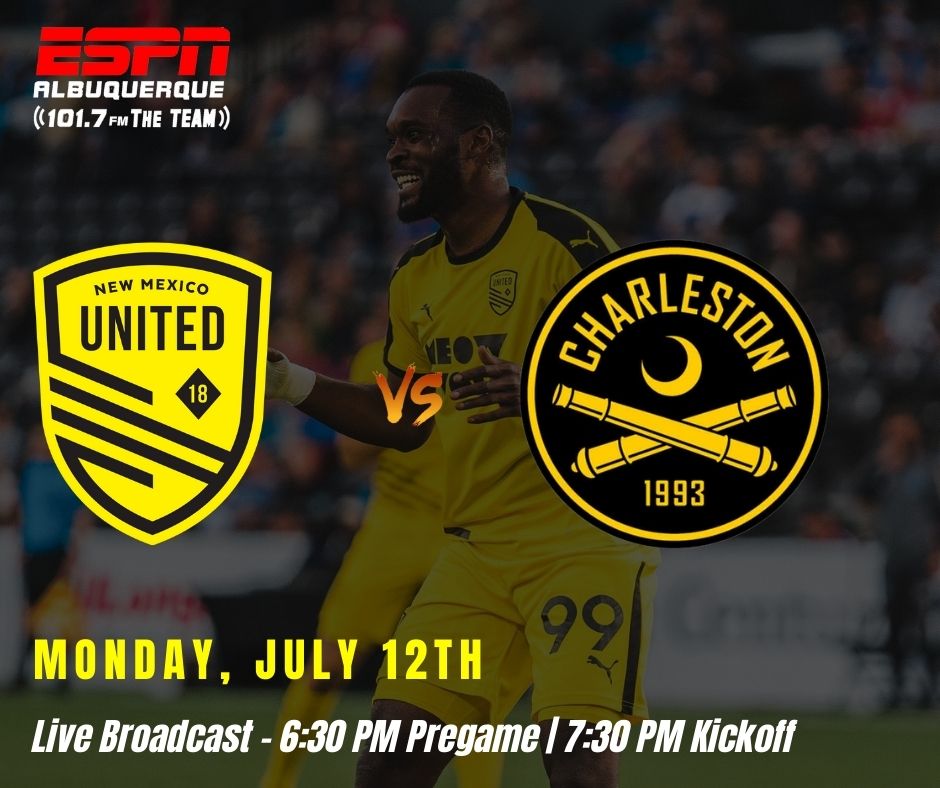 After winning in dramatic fashion on Friday night, New Mexico United is hoping to make it two in a row on Monday when they welcome Charleston Battery to The Lab. If the name doesn’t sound familiar, that’s because this will be the first time the two clubs have ever faced off against each other.

The Battery is one of the longest continuously running football clubs in the United States after being founded in 1993. In their time in existence, they have excelled at whatever level of football they have participated in and have developed a lot of talent within their program. United is tied to that talent with Troy Lesesne, Zach Prince, and Michael Azira, all having suited up for them in the past. It’s safe to say that without the Battery, United wouldn’t be where they are today.

This season though, the Battery has struggled to find consistency in their results. After the weekend results, they are sitting in seventh in the Atlantic Division on twelve points. However, due to scheduling issues and having matches rescheduled, they have as many as four matches in hand against some of their division opponents. Those matches could be more than enough to give them opportunities to work their way back into the playoff positions before the end of the regular season.

In their last match, Geobel Perez Oquendo took advantage of a ball that wasn’t secured by the Pittsburgh Riverhounds keeper to put the Battery up early. They weren’t able to pick up the three points, however, as they conceded late and earned only one against the second-place club within their division. They played that match in a formation that is very familiar to anyone that watches United. Battery manager Michael Anhaeuser put out a 352 formation against the Riverhounds. While they did concede most of the possession, they did have more shots and shots on target.

Nicque Daley – The Jamaican international came to the Battery in 2019, having signed a four-year deal with the club. So far this season he’s scored twice in eight matches but has the ability to score more frequently than what has been shown so far. While he doesn’t have the pace of a Hadji Barry, he’s an intelligent footballer that can work himself into threatening areas.

United is coming off of a 3-1 win over Colorado Springs Switchbacks FC on Friday night. After taking the match down to the wire, Azira and Ilija Ilic each scored in stoppage time to secure the three points. The mood was dampened somewhat by the loss of Sam Hamilton, who went down with an injury in the first half. Along with Sam, United will also be without Brian Brown and Harry Swartz, both of who have been ruled out due to injuries. Amando Moreno is also unavailable while he continues to play with the El Salvador nation team in the CONCACAF Gold Cup.

With the number of unavailable players rising, there’s an increased chance that more academy players get to see some first-team action. Cristian Nava was the first of those last weekend when he made his professional debut against the Switchbacks. It also could give an opportunity for Alex Touche to get meaningful minutes for the first time this season.

No matter who sees the pitch on Monday night, the key for United will be eliminating the mental mistakes. There were two costly errors against both El Paso and Switchbacks. If not for a fantastic save by Alex Tambakis, the scoreline could have looked different on Friday. Each of those errors came within the defensive half and gave scoring opportunities to the opposing sides. If those errors can be eliminated, United stands a good chance of picking up their second win in a row and another clean sheet.

Josh Suggs – United’s team captain has adapted well to the role of wingback and has been instrumental in the success of the club so far this season. He’s a true threat going forward and is still one of United’s top defenders. He is second on the team in shots and is joint lead with Moreno for shots on target. With his leg he can score from anywhere on the pitch and his transition play has been outstanding.

The match on Monday night will be streamed live on ESPN+ with kickoff scheduled for 7:30 p.m. (MDT). The match will also be broadcast live on ESPN Radio 101.7 The TEAM, via The TEAM app, and The TEAM website.