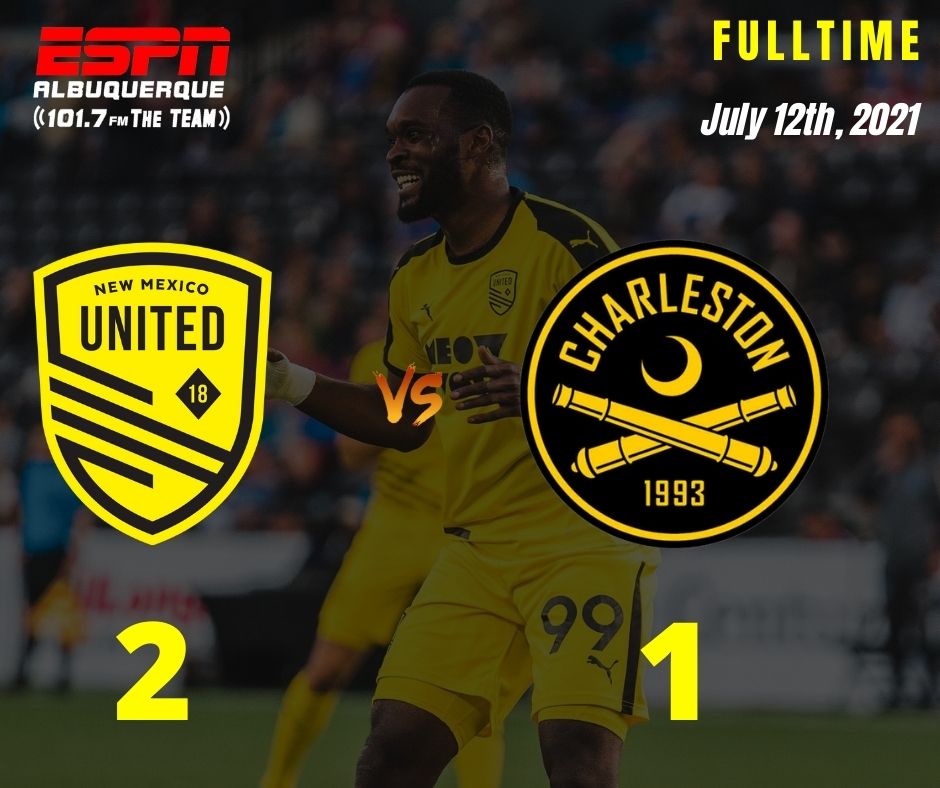 Within four days New Mexico United played in two matches that resulted in the club picking up six points.

Those two matches also resulted in 18 yellow cards, 7 goals, 2 red cards, and United’s first win over an Eastern Conference opponent. The two results were exactly what United needed after suffering a three-match losing streak. While they weren’t the cleanest of matches, United showed determination, some much-needed physicality, and mental toughness.

With several players and coaching staff members facing off against their former club, Charleston Battery, the emotions of the night could have become too much. But Troy Lesesne and his men in black were ready for the challenge ahead of them. In the 15th, they were able to strike first and it came from an unlikely duo. After winning a corner, the ball was played away from the box, but the line held its place on the pitch. Juan Pablo Guzman took the corner and put a cross into the far post, something that he hasn’t been known for during his time in New Mexico. On the receiving end was Kalen Ryden, whose monster header fooled Charleston keeper, Joe Kuzminsky, and went into the left netting to take the lead, 1-0.

From there, the defense of United was on display. Charleston wanted to attack down the channels and spread the backline, but each time they did, United answered the call. Austin Yearwood and Rasheed Tetteh each made great defensive plays, preventing the visitors from generating chances.

Charleston’s first and only shot on target for the night came in the 38th. From outside the six-yard box, Dionysius Harmon was able to get off a cross to the far post where Claudio Repetto had gotten away from Tetteh. Repetto played the ball off of his chest and into the net behind Alex Tambakis to equalize.

From then, the match became considerably more chippy. The first yellow cards of the match were shown in the 43rd when Angelo Kelly fouled Juan Pablo Guzman and a scrum broke out on the pitch. Neither side went so far as to create a physical altercation, but the mood on the pitch shifted.

Just after the halftime break, Devon Sandoval got onto the scoresheet for the first time since the second week of the season. Making a run straight into the area, Dev looked to Sergio Rivas to deliver the ball. Rivas did and Dev’s attempt from short-range was blocked Kuzminsky, but he couldn’t control the ball. With no room between the two, Sandoval was able to continue his run of play and put the ball over the line for the 2-1 lead.

The remainder of the match was about keeping the pressure on and not conceding a second goal. United nearly gifted Charleston an opportunity in the 83rd, but Romario Piggott didn’t have the quality necessary to finish and put the ball well over the bar. After seeing out the final minutes of the match and the final whistle blew, the action on the pitch wasn’t finished. Charleston midfielder Burke Fahling was shown a red card after the final whistle blew and will face suspension for his actions.

Kalen Ryden – After a poor performance on Friday night, Ryden turned things around and played spectacularly during the Monday night match. His stats for the night included six clearances, nine recoveries, two interceptions, and one goal.

Devon Sandoval on recent attacking success: “I think we’ve been more dangerous the past five games. We’re starting to create more chances, and I think we’re starting to flow a little more, and I think you saw that tonight. We scored two goals, but we weren’t too far away from scoring three or four. So, we just need to keep grinding and keep pushing like that, and more goals will start falling for us.”

Troy Lesesne on the flow of the game: “You guys refer to me as calm all the time. You should ask these guys how calm I am. I said this last match when we got a great result against Colorado Springs: Emotions in the game are really important because it makes the game have a little bit more edge to it, but when we lose three matches in a row after going up, there’s a knee-jerk and emotional reaction, which is to say ‘Hey, what’s going on?’ And I think when you remove that emotion and you say ‘What exactly is happening?’ you’re able to get into the process that needs to take place in order to go in and get results. The same way that we have that critical eye when we lose matches and we try to remove emotion, honestly, I do the same thing after these two wins. The elation is great, and everything like that, but we quickly move on toward San Antonio. And I think that’s the way it has to be because you never want to get too high or too low.”

After two matches in four days, United will get a nine-day break between matches. They will return to action on July 21 when they travel to take on San Antonio FC.