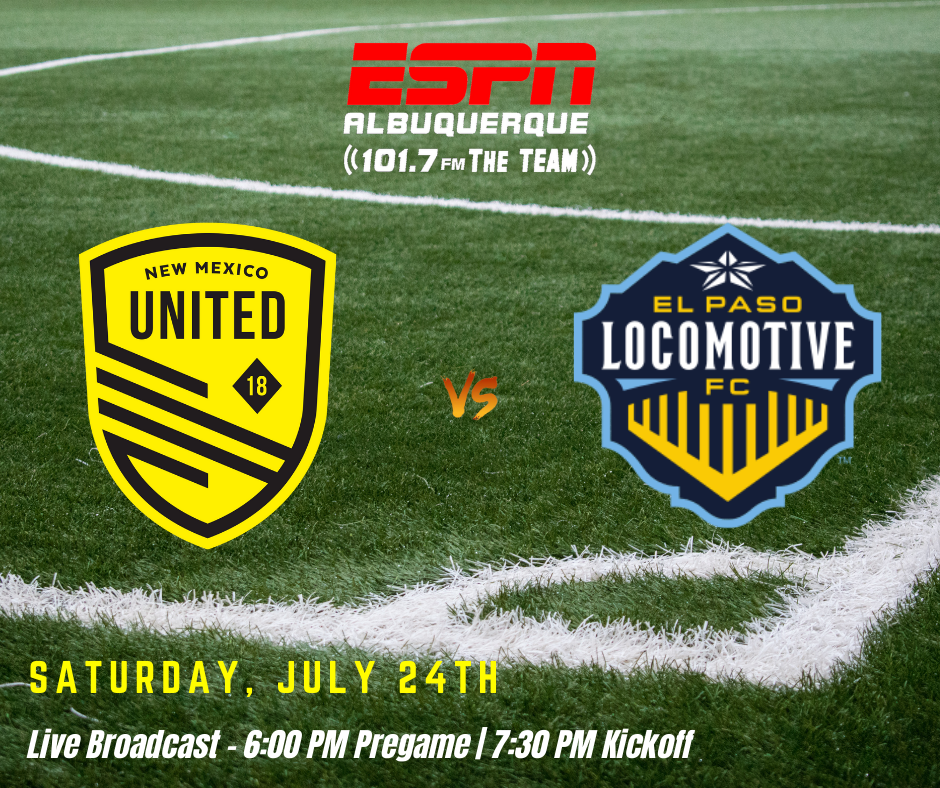 The last time New Mexico United hosted the Rio Grande Rivalry, they won by a final of 3-0. That was back in 2019, though.

They’ve played seven times since then, and all of those meetings have been in El Paso. During that span, the six regular-season matches have been split as close to even as they can be, with United going 1-2-3 in those results. The more recent matches have played out more in favor of El Paso than United, but that’s a testament to the growth of both clubs.

This season El Paso was among the last clubs to lose a match, and if not for the stellar play of Rio Grande Valley, they would likely sit alone atop the Mountain Division.

Despite the season having not reached the halfway point yet, this is the third meeting of 2021 for the rivals. The last meeting between the two came down to the ninety-second period in which United made multiple mental errors that lead to two goals for the Locomotive. Dylan Mares benefitted both times and put a brace on the scoresheet that night. Up until that point, United had played solid defensively. Unfortunately, the high press from El Paso and turnovers in the defensive half gave them the opportunities they needed to score.

Diego Luna – The 17-year-old made his professional debut earlier this season and has been like lightning in a bottle for El Paso. Through 11 appearances, the young star has three goals and has made a visible impact every time he has stepped on the pitch. His footwork was on display during the last match, and he was able to work his way into the box a few times.

After suffering their fourth straight road loss, United returns home where they currently carry a two-match win streak. The difference in their home and road form has been night and day, which has been surprising after how well they played on the road in 2020. At The Lab, United has scored ten goals and only allowed four, and never more than one in a match.

A win on Saturday night would go a long way to helping United in the Mountain Division standings. El Paso currently has three matches in hand on United, and handing them a loss would help decrease the possible deficit from those matches should El Paso pick up points from them. With the back half of the season around the corner, every point is crucial.

United’s midfield and the play of the centrebacks will be areas to watch for the club on Saturday. They have to find a way to stay at home on their assignments and not let players like Luna or Dylan Mares use their footwork to force them into bad decisions. They also have to remove the mental errors that were made during the last match. When United controls the midfield and minimizes the number of mental errors, they put themselves in a position to walk away with points.

Cristian Nava – The first United academy player to make their professional debut, Nava has looked energetic every time he’s stepped on the pitch. The excitement and energy he brings are a spark for the rest of the club. With the club looking for someone to fill in for the injured Sam Hamilton, there’s a chance that Nava could get a start soon and against their rivals; it could be just what the club needs.

Saturday night’s match is scheduled to kickoff at 7:30 p.m. (MST) from The Lab. The match will be streamed domestically on ESPN+ and internationally on YouTube. The match will also be broadcast locally on ESPN Radio 101.7 The TEAM, via The TEAM app, and The TEAM website.