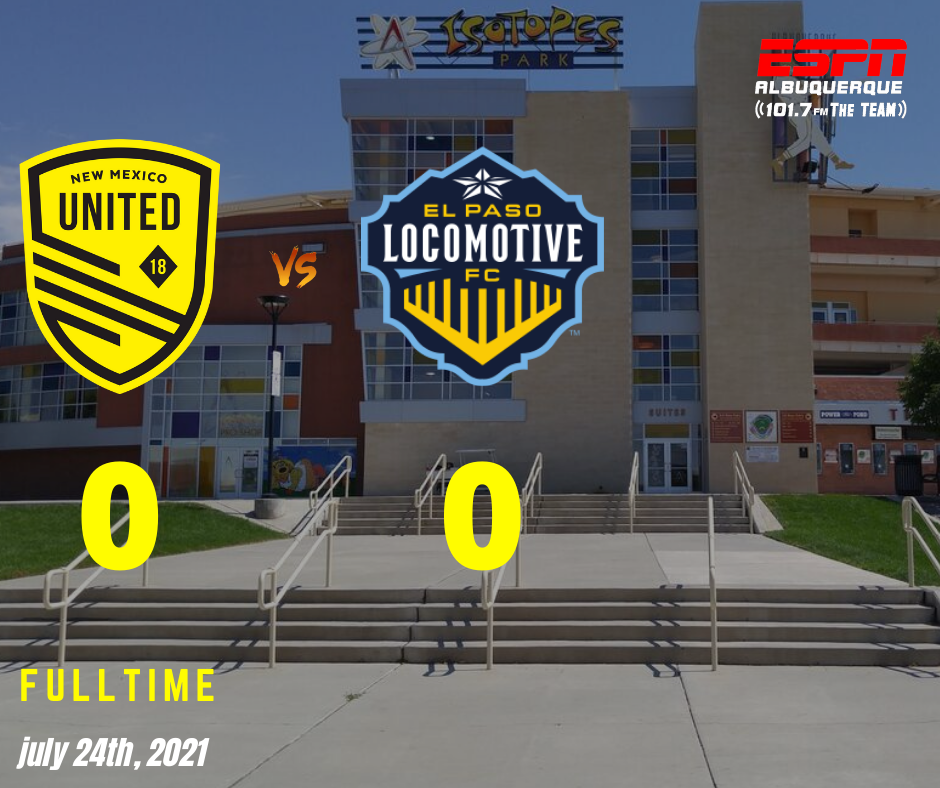 Saturday night’s match was as close to a must-win match for New Mexico United as it could be. Trailing El Paso Locomotive FC in the standings and with the visitors holding matches in hand, three points were desperately needed to help keep the gap between the two close.

As is customary in the series, the physical play started from the opening whistle and didn’t let up until the whistle blew to signal the end of the half. With play stopping and starting nearly two dozen times due to fouls, it was hard for either to gain momentum. Despite the disruptions, El Paso seemed to handle the flow of play better, and their pressing further prevented United from putting anything together.

For all the scoring that has happened in this series, the first half was largely a midfield battle. The efforts from the two sides resulted in a total of four shots being allowed between the two.

The play after halftime didn’t change much. The physicality continued, but there was an increase in the amount of flopping, particularly from El Paso. Going into halftime, United had conceded 16 fouls to El Paso’s 4. That trend also continued as the clock ran had eventually resulted in United being forced to play down a man for the second time at home. In the 65th, Juan Pablo Guzman was given a second yellow card, reported as a deliberate handball by the referee. From that point forward, United didn’t just sit back, but kept looking for a winner.

Neither side was good enough in the final third to find a goal on the night. The closest that United came to finding the net was after a  foul inside the attacking half. Off of the set piece, Josh Suggs fired towards goal in the 64th, but his shot was inches away and rebounded off the post.

United’s solid defensive effort throughout the match, and especially after going down a man, earned the club a hard-fought draw.

Alex Tambakis – With two more saves and another clean sheet to his name, it was a bounceback performance for the Greek Freak. A solid performance should give him more confidence going forward.

For their next match, United travels to Tacoma as they face Tacoma Defiance. The club has not faced Tacoma since the 2019 season, and in the two matches, United won the first 2-1, and the teams drew 1-1 in the second. The match is scheduled to kick off at 2:30 p.m. (MST) on Sunday, August 1.