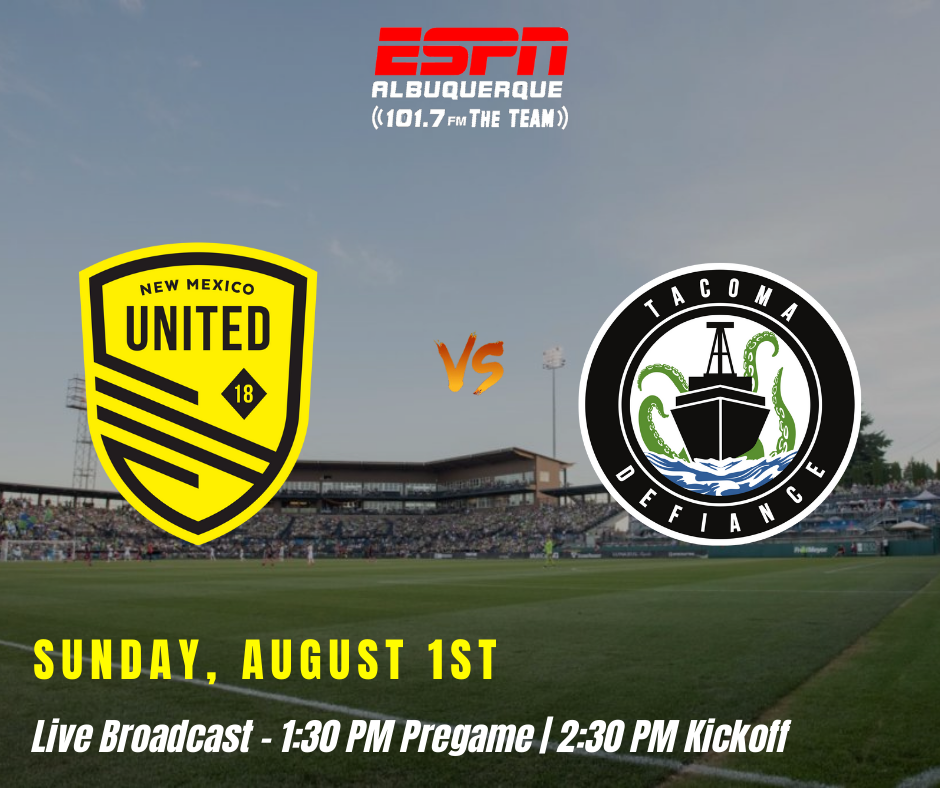 New Mexico United reaches the halfway point of their 2021 schedule this weekend as they take on Tacoma Defiance for the first time since 2019. As part of the league’s format for this season, United is taking part in eight matches outside of the Mountain Division, with this being the third one.

The trip to Tacoma could be overlooked given the club’s historical results. Tacoma finished outside of the playoff positions in each of the past two seasons, earning less than a point per match in each campaign. Something is clicking for Defiance at home in 2021. Through five matches at Cheney Stadium, they are unbeaten and have only allowed three goals on their home pitch.

Their success at home appears to be the result of the play of the defense rather than the play of the goalkeepers. Four different players have taken their place between the sticks for Defiance, and none have stood out in their efforts. The outfield players have been very good this season, but they’ll have to play around the absence of Eric Kinzer. Kinzer was sent off in their last match against San Diego Loyal after receiving a straight red.

Carlos Anguiano – Since he began his career with Timbers 2, Anguiano has been an important piece of their midfield. His performance on the pitch in 2019 made him one of USL’s players under 20 to watch. He has continued to improve and has scored twice so far this season for a side that has struggled at times to find the net.

United is still looking for answers as their season hits the halfway mark. Their previous two matches against San Antonio and El Paso show that there are still areas that need improvement. One of those is the midfield. Whether in defense or creating chances going forward, there have been struggles throughout the season.

There are reasons to be hopeful, though, as United received good news this week. Amando Moreno is returning to the club after his call-up during the CONCACAF Gold Cup. The club also announced the return of defensive midfielder David Najem, who was signed as the first mid-season signing in club history. Najem was an integral part of the midfield during the 2020 season and has spent time with the Afgan National Team since the end of the season. His return is a welcome addition after the injury to Sam Hamilton and the upcoming suspension for Juan Pablo Guzman.

The return of Moreno should also provide a spark for United’s attack. At times the club has looked lost and lacking creativity, particularly through the middle of the pitch. Moreno brings a diverse set of skills and draws a lot of attention from opposing clubs. He can create chances that have been sorely missed in his absence. With him on the pitch, United has been a lot more threatening and will have a much better chance at breaking down the backline of Tacoma.

Amando Moreno – After impressing during the Gold Cup, Moreno returns to a club that needs to turn its season around. His pace and ability to create space will be important against a Tacoma side that doesn’t give an inch at home. Creating space allows Moreno and those around him to create chances and potentially pull Defiance players out of position.

Sunday’s match is scheduled to kickoff at 2:30 p.m. (MST) from Cheney Stadium. The match will be streamed live on ESPN+ for domestic viewers and YouTube for international viewers. The match can also be heard live on ESPN Radio 101.7 The TEAM, via The TEAM app, and The TEAM website.