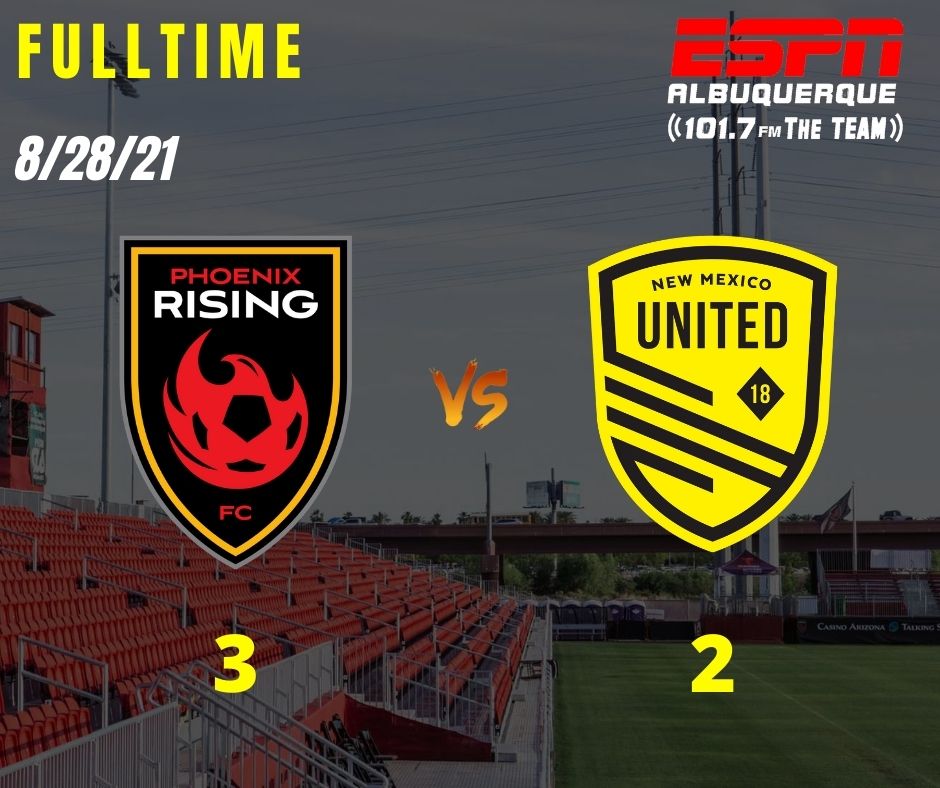 The Rumble in the Desert got off to a fast start on Saturday night. Both New Mexico United and Phoenix Rising FC came into the night needing to right their respective ships. Early on, they both looked ready to open the scoring.

It was United that was able to find the first goal at Wild Horse Pass with a thunderous strike from Sergio Rivas. Juan Pablo Guzman opened the move with a brilliant tackle in the final third and was able to facilitate getting the ball over to Rivas. Chris Wehan faked going at the ball, opening up space for Rivas, who buried a shot into the left side of the netting.

The entire first half was a flurry of activity. United made defensive stop after defensive stop, ending multiple attacking threats from Rising. Rashid Tetteh had the arduous task of defending Santi Moar on the left side of the pitch. Tetteh kept forcing Moar to his left, effectively cutting out the threat from that side.

Between the efforts of Tetteh and Alex Tambakis in the first half, it appeared as though United were on their way to picking up their first win since July 12. But then came the second half.

An all too common theme throughout the season has been United’s inability to close out matches. Unfortunately for the Yellow & Black, that trend reared its ugly head again tonight. Rising came out of the locker room with a renewed sense of urgency, and they forced United back on their heels. It wasn’t long before Joey Calistri put the first of his two goals on the night into the net. The first came just before the hour mark on a counterattack. A set-piece from United didn’t go to plan, and Rising was off, heading the opposite way.

Poor slide tackles from both Andrew Tinari and David Najem gave Rising a numbers advantage on the counter, and Aodhan Quinn was able to set up Calistri on the right side of the box. Calistri put a powerful shot on goal, and Tambakis was left rooted to his spot as the ball went past.

Calistri’s second would find the net only seven minutes later. From a similar angle, but farther out, he drove a low shot towards the goal. Once again, the ball went past Tambakis into the left corner to give the hosts their first lead of the match.

United received a glimmer of hope in the 80th after a corner kick went wrong for Phoenix. United had attempted a cross into the box, but Andre Rawls stepped up to punch it away. The punch, however, sent the ball directly into James Musa, and it deflected off of him back into the net, squaring up the game at two goals apiece.

As the match entered into the final seconds of regular time, former United player Santi Moar put the dagger into the supporters’ hearts. For the third time in the match, Tambakis conceded a goal from the right side of the box as Moar placed one perfectly into the left side of the net to seal the match for Rising, 3-2.

Joey Calistri – Calistri is becoming known as the United killer. His performance tonight included four shots on target, two goals, and an additional chance created. He dismantled United in the second half and led Rising to the win tonight.

United return to action on Saturday, September 4, when they play host to Colorado Springs Switchbacks FC. That match will kickoff at 7:30 p.m. (MT) from The Lab.