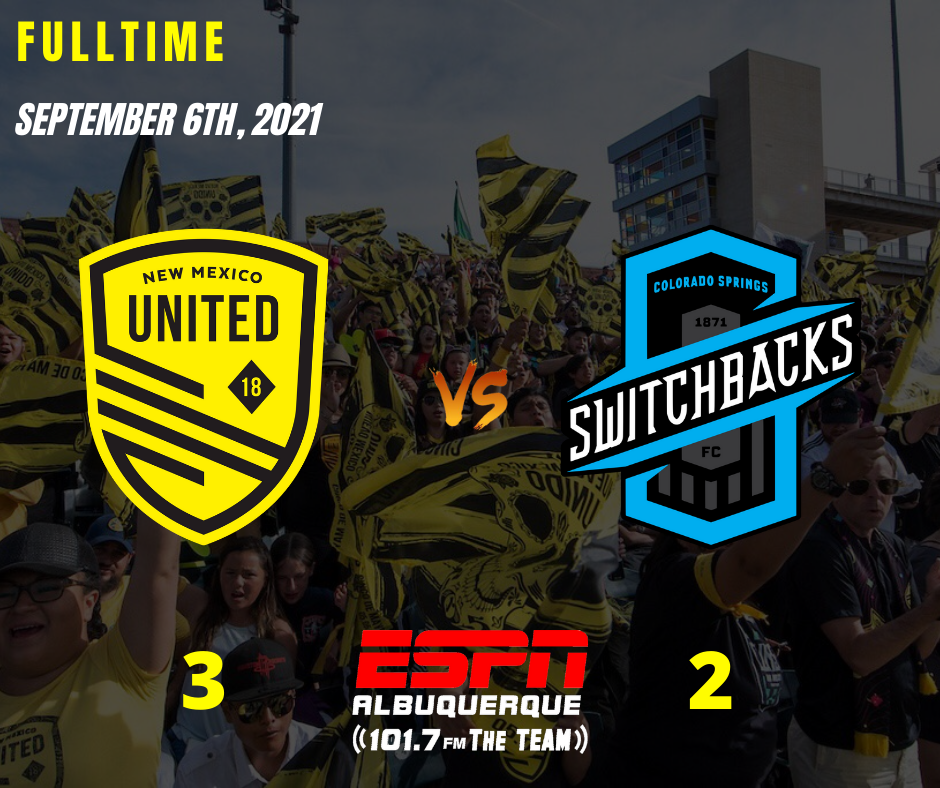 After seven winless matches, facing Colorado Springs Switchbacks FC was always going to seem like a tough job. Heading into this weekend, United had already beaten them twice and seemed to have the formula figured out. In front of 7,077 fans, they were able to put together a winning performance for the first time in almost two months and secured a winning record against the Switchbacks this season.

As lightning flashed in the distance, the right boot of Chris Wehan generated some of his own in just the third minute of play. United looked strong in the opening minutes, holding the early possession and working the ball into the final third. Josh Suggs, who was playing on the right side of the pitch to start the night, delivered a cross to the penalty spot where Wehan was waiting. On the volley, his right foot powered the ball past Rodriguez.

United jumping out to the early lead woke the Switchbacks from their slow start and would essentially control the next thirty minutes of the match. The momentum on the pitch started to go their way and so did the calls. Pressure from the Switchbacks forced United into some passing errors in their own half that opened up some counterattacks. The play of Austin Yearwood and Kalen Ryden kept a lot of the pressure from reaching the danger area.

In the 23rd, Michelle Ngalina found an opportunity to put a cross into the area for Deshane Beckford. Rashid Tetteh matched Beckford step for step and attempted to play the ball out with a diving header. Unable to get under the ball, Tetteh’s headed ball went into the net for an own goal, leveling the score.

The pressure from Switchbacks was persistent throughout the half, but the men in black were finding space through the middle and off the shoulders of the Switchbacks defenders. Minutes before the half ended, Sergio Rivas found one of those pockets running at the Colorado defenders. Cutting through the middle of the pitch Rivas drew the center halves forward and then played a through ball ahead for Josh Suggs. Suggs took the ball onto his left foot and found the top left corner to retake the lead for the hosts, 2-1.

In a welcome change from prior matches, United carried that momentum over into the second half and their confidence paid off early. Devon Sandoval was able to get into the box with possession and as he was turning to goal, was taken down by Makangila. The foul gave United their first penalty attempt since August 29 of 2020. Sandoval stepped up to the spot and delivered a well-placed shot into the right side of the goal for a 3-1 lead.

Playing with a ton of confidence, United continued to press forward looking for a fourth goal. They created several opportunities throughout the second half and came close several times. With their effort tonight, the boys created a total of 15 shots, 9 of which were on frame.

With regular time coming to a close the Switchbacks threw everything they could at the hosts. It was in the 88th that they were able to narrow the gap to one goal after Dantouma Toure expertly split the United defense and put away a through ball from Jose Torres to cut the lead to 3-2.

Things got testy in stoppage time when Michee Ngalina threw a ball at one of the ball managers and received a red card for violent conduct. Even with only ten players, the Switchbacks believed they could find a late equalizer and had chances with three set pieces within a matter of minutes. None of the attempts found their way past Tamabakis however, and United picked up their first win since July 12.

Josh Suggs – After a difficult stretch for the club, Suggs and company stepped up and took care of business against a tough opponent. His efforts on the night earned Suggs both a goal and an assist and he put in some stellar defensive work as well.

United has a short turn-around time this week as they prepare to face Austin Bold FC on Friday. September 10. That match will take place in Austin and will kick off at 7:00 p.m. (MT).