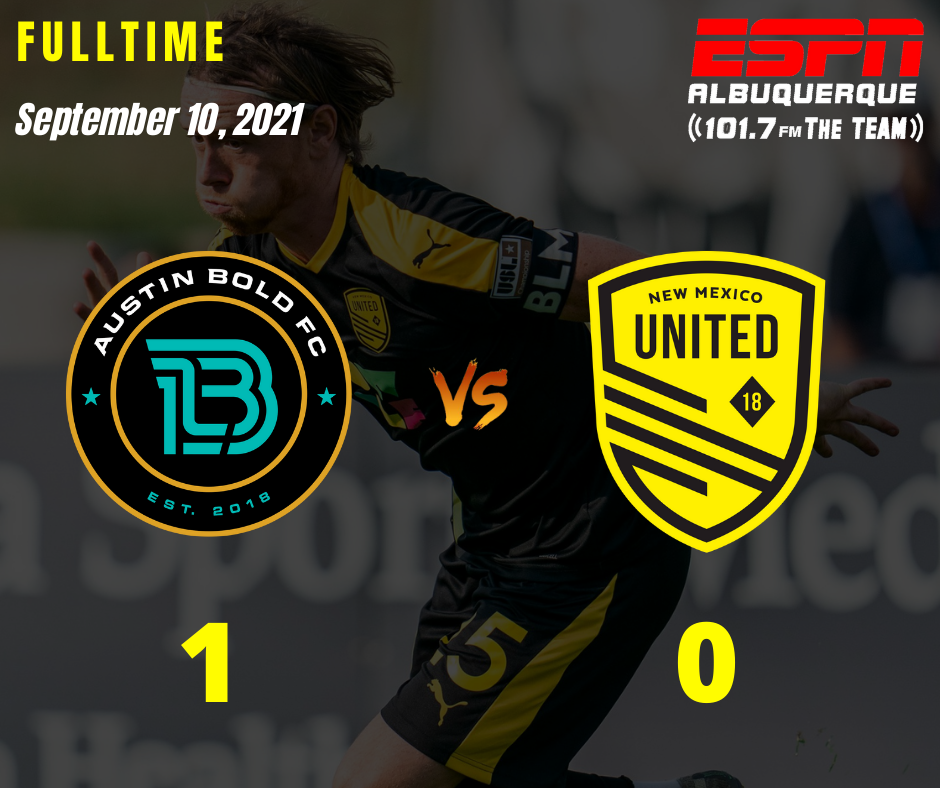 The New Mexico United that showed up in Austin tonight wasn’t the same United that took the match to the Switchbacks one week ago. Despite only one change to the starting eleven from the weekend, the play on the pitch regressed to what they were showing as little as two matches ago. Instead of the more vertical and versatile Sergio Rivas, in stepped Juan Pablo Guzman.

The switch from Rivas to Guzman changed the dynamic of the midfield, and whether it was due to the game plan coming into the night or just the personnel change, United sat back for much of the first half. In doing that and absorbing the attack of Austin Bold FC, they seemed content to either wait for the opportunity to counter or wear down the hosts. The more defensive formation and use of Guzman left a significant gap between the midfield of United and the forwards. That gap prevented United from having more seamless transitions in the chances they did take going forward and often stalled out the attack.

Meanwhile, Austin looked much more comfortable with the run of play during the first half. They were able to put themselves in promising positions and created opportunities to take a lead into halftime. If not for some great defending by Kalen Ryden and Alex Tambakis, they likely would have. The most telling stat of the first half was the difference in the shots taken for both clubs. Austin Bold was able to take advantage of the space they were given and created opportunities for eight shots. For United, they only managed one shot as recorded by the USL Championship website, and that attempt was blocked.

Seemingly content with their first-half efforts defensively, United came out in the second half looking to turn on the attack from the last match. They looked significantly more dangerous in the second half, and Chris Wehan had an opportunity shortly after play resumed. After being played in behind the Bold defense, Wehan pulled Elliott Panicco off of his line. The effort came to nothing, however, as Wehan wasn’t able to square the ball or get into a good shooting position.

As solid as United was across the pitch in the second half, they couldn’t keep Bold off of the score sheet. In the 76th, Michael Azira took down Beto Avila inside the box and conceded a penalty. Xavier Baez was given a chance to stand at the spot, and his aim was true. Tambakis went to his right, but the shot from Baez went straight down the middle of the goal and put the hosts up 1-0.

With the remaining time in the match, thirteen minutes including stoppage time, United could only manage one shot and couldn’t get it on frame. Austin Bold would see out the rest of the match and pick up an important three points towards the playoff race.

Alex Tambakis – Although he was unable to save the penalty attempt by Baez, Tambakis did record three more saves, and his efforts kept United from falling behind in the first half. Any time a goalkeeper can prevent the opposition from scoring, it gives their team a chance to walk away with points.

United return to action on Saturday, September 18, when they host Real Monarchs SLC. That match will take place at The Lab, with kickoff scheduled for 7:30 p.m. (MT).