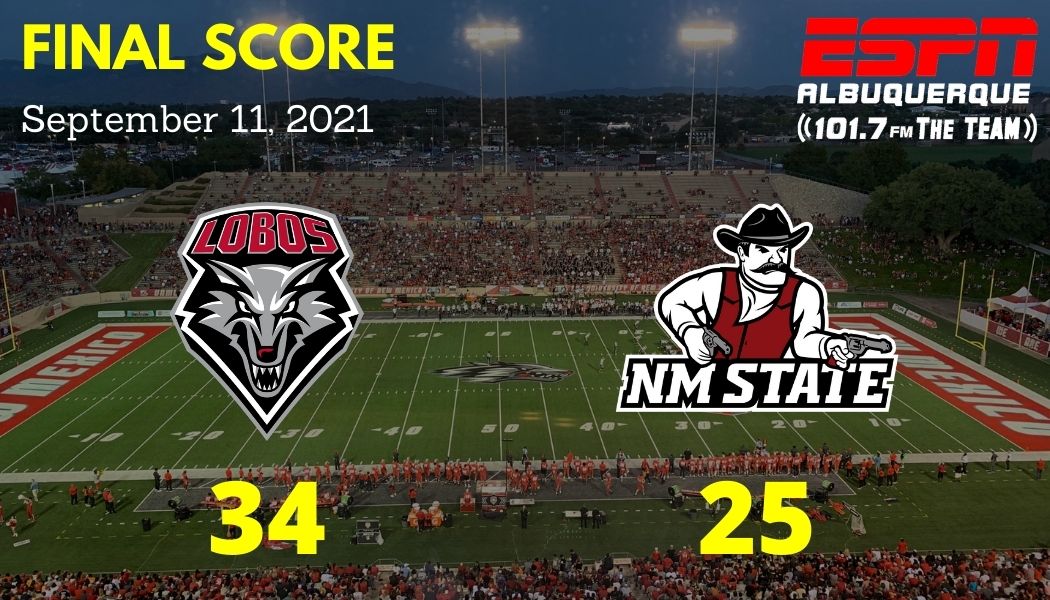 The yearly matchup against in-state rival New Mexico State is the first game Lobos circle on their calendars when schedules are released each season.

It doesn’t matter that UNM holds a commanding 73-33-5 all-time record against NMSU.

It doesn’t matter that the Lobos have won three straight against the Aggies and 43 of the 61 times the teams have faced off against each other in Albuquerque.

What matters is winning the Rio Grande rivalry each year and holding bragging rights over your opponent from the south.

And that is precisely what the Lobos did on a hot Saturday evening in front of 28,470 fans at University Stadium, with a 34-25 victory to move to 2-0 on the season.

Terry Wilson threw for a career-high 381 yards and three touchdowns, Bobby Cole rushed for a game-high 113 yards and a score on 20 carries, and Emmanuel Logan-Green posted a game-high 106 receiving yards and a touchdown to lead UNM.

The Lobos jumped up early on the Aggies with a four-yard Bobby Cole touchdown run with just a minute off the clock in the first quarter. UNM would add another touchdown on a 15-yard touchdown pass from Wilson to Connor Witthoft to end the first quarter of action with a 14-3 advantage.

The Aggies would finally get their offense going in the second quarter with a pair of touchdown passes, including a 75-yard strike from Dino Maldonado to Isaiah Garcia-Castaneda that cut the UNM lead to just 24-20 at the half.

The Aggies would score just five more points in the game with a safety in the third quarter and a 37-yard field goal from Ethan Albertson with 12.:32 remaining in the game.

The Lobos squandered more than a few scoring opportunities in the second half but finally put the game away when Wilson hit Logan-Green with a 58-yard touchdown pass that sealed the victory for New Mexico.

With the win, the Lobos move to 2-0 on the season and have won four straight games dating back to last year. The Lobos face a tough battle next week as they head to College Station, Texas, to take on the Texas A&M Aggies.

New Mexico State falls to 0-3 with the loss. The Aggies will look for their first win of the year when they host South Carolina State at Aggie Memorial Stadium next Saturday.