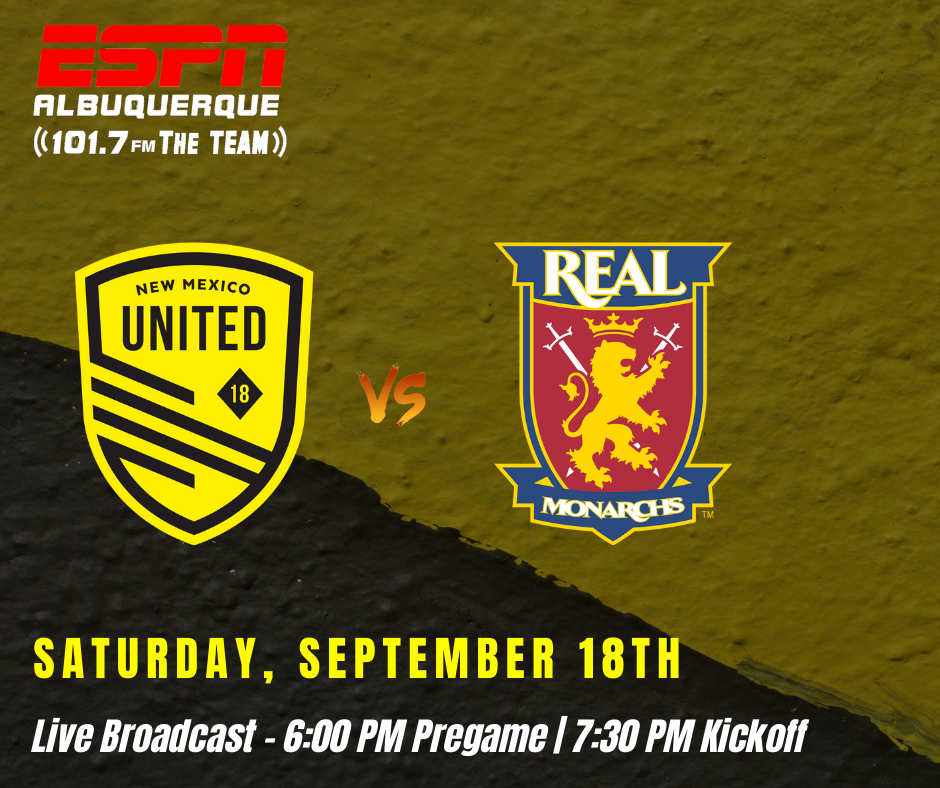 New Mexico United has been here before. The season is winding down, and they’re trying to secure a spot in the playoffs. It’s as if the 2019 season is repeating itself.

As that season neared the end, United was on the outside looking in, and once again in 2021, they’re in the same position. They’ve been unable to close out matches and have drastically underperformed away from The Lab. Six of their final ten matches are at home, which should give them enough opportunities to keep the door open on another playoff run. Unless they can add some points on the road, that door may slam shut.

The final push for the playoffs is here, and Real Monarchs SLC come to Albuquerque riding a five-match losing streak. The Monarchs tied for the least number of goals scored in the entire USL this season with 20, but they’ve played United tough in both of the earlier meetings. When the two clubs met on June 30th, the Monarchs pulled off an unexpected win in Herriman. That night they were able to put three goals past Philipp Beigl in his lone start of the season.

The Monarchs have some talented pieces, but as with most MLS II clubs, those pieces often get called up or sent elsewhere for more experience. At times the team sheet has featured some returning veterans, but there hasn’t been enough consistency from any set of players for them to have success on the pitch. As they have shown, on any given day, anything can happen.

Aris Briggs – The former Georgia State University Panther made his professional debut earlier this season and opened his professional account against United during the match in Herriman. Since then, he’s added two more goals in fifteen total appearances for the club.

United know that their time is running out on the season, and in the eyes of some fans, the seat is getting hotter for Troy Lesesne. After two postseason appearances in the first two years, it’s a strange thing to say. The results this season, especially the inability to close out matches, have some supporters saying that it is time for Troy to be let go. Troy and the team will tell you that if a handful of moments had gone their way, then this season would be viewed differently.

Throughout the season, there have been glimpses of what this year’s roster could accomplish. Despite the injuries and the roster changes, the defense has been solid, and they’ve been in every match. One area of concern heading into the match this weekend is the midfield. Two weeks ago, Sergio Rivas was placed into a deeper role, and he shone against the Switchbacks. The following week Juan Pablo Guzman was given the start, and with a conservative game plan in place, the offensive spark wasn’t there. If United is going to make the playoffs, they need to come out and play aggressively and grab every opportunity they get.

Amando Moreno – Now that Moreno has returned from international duty, he will hopefully be able to contribute to the playoff push. With his ability in the attacking third, he should link up well with Chris Wehan and create opportunities for each other and put pressure on whoever is between the sticks for the Monarchs.