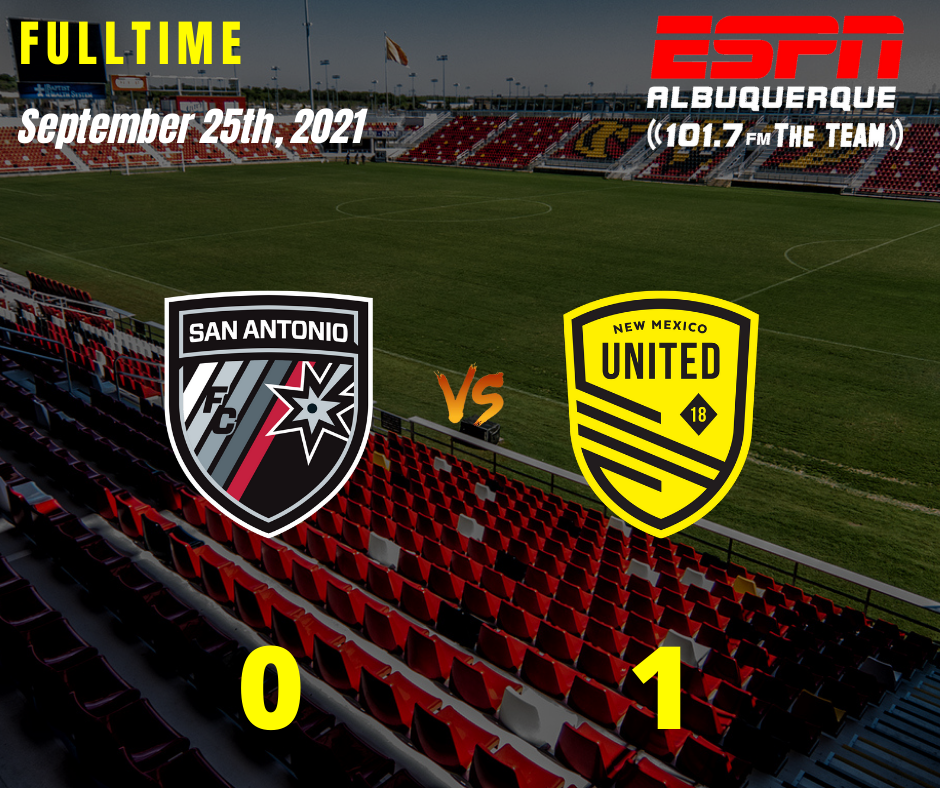 Once again, the transfer of Chris Wehan has proven to be an astute business decision by the front office of New Mexico United. Tonight, Wehan picked up his fourth goal since rejoining the club, and this one happened to seal a win in San Antonio.

Entering the night, United had never won a regular-season match in San Antonio. To try and change that. Troy Lesesne put together a team sheet that seemed unorthodox against San Antonio FC, who have a distinct size advantage over many United players. The starting eleven featured Amando Moreno as the lone striker and saw both Andrew Tinari and Sergio Rivas return to starting roles.

While the team sheet showed it as a 343, as has been the case for most of the season, it played more like a 3421 formation. Within the formation, different looks were shown throughout the night as several players, particularly the forwards, interchanged where they were positioned and even dropped deeper into the midfield at times. The different looks mixed with the abilities of the players on the pitch helped keep San Antonio off balance and allowed United to control the first half-hour of the match.

Although they were unable to find an opener, United controlled possession and only allowed their hosts the opportunity to get off two shots in that time. It was around then that San Antonio started to find their footing and became the aggressor for the rest of the first half. Roderick Epps had arguably the best attempt on goal for either team seconds before the half came to a close. Epps worked his way up the right side of the box, and despite being well defended, he put a shot across the face of the goal, and it deflected off the left post.

Play in the second half began with a sense of urgency from both sides. San Antonio began to narrow the possession gap, and an early attempt from Nathan went wide of the mark.

Both managers had made adjustments to their game plan and knew they needed to find a spark to secure the crucial three points. With his first substitution of the night, Lesesne brought on Devon Sandoval to provide a more physical presence up top and create more space for Moreno and Wehan. Lesesne would later bring on Josh Suggs and Saalih Muhammad each of whom provided a set of fresh legs and some additional help tracking back.

The injection of Suggs’ pace down the left side had an impact by pulling San Antonio defenders from the middle of the pitch. Those types of attacking runs allowed Moreno, Sandoval, and Wehan to work their magic in the 84th minute. While the three forwards were making a run towards the San Antonio goal, Sandoval made a crossing run from the middle of the pitch to the left side of the box, pulling Axel Sjoberg out of position and opening up a passing lane for Moreno. At the same time, Wehan made a similar run, except his run took him deeper into the box and into the spot that had been vacated by Sjoberg. With inch-perfect passing, Moreno hit the gap with a through ball that Wehan slotted home using his left foot.

From there, it was just a matter of running out the clock, which United did with relative ease. San Antonio was not credited with a shot on target, let alone a single shot after the 75th minute.

Chris Wehan – Beyond the goal scored tonight, Wehan was everywhere on the pitch. He contributed defensively, made attacking runs, and created chances for those around him. His return to this club and this system has been nothing short of tremendous.

With the three points secured in San Antonio, United next turn their attention to Rio Grande Valley FC. The two clubs have not played each other since the first week of the season and still have three more to play in the series. RGV also picked up a win on Saturday night and sit ahead of United in the table due to the USL Championship tie breakers. With each side sitting two points adrift of fourth place, the face-off at The Lab is vital to the hopes of both.