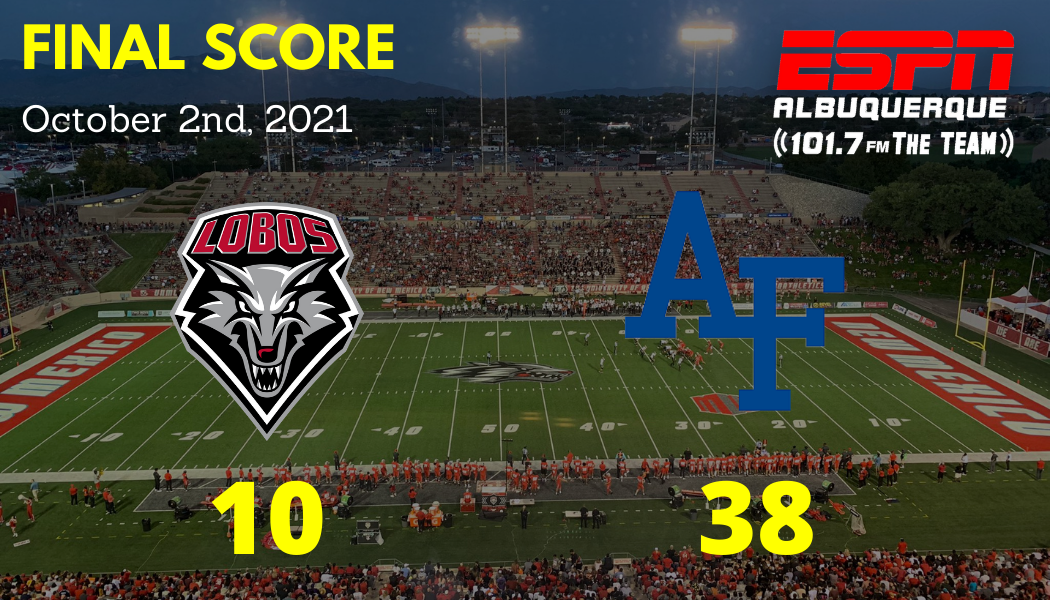 The 2-2 University of New Mexico Lobos kicked off Mountain West Conference play against the Air Force Falcons on Saturday before 12k fans at University Stadium.

Unfortunately, the Lobos did not show up for the game until around 6:00 pm, well after the Falcons amassed a 31-0 lead and limited the Lobos to just 46 first half yards. The Falcons scored on their first four drives of the game, taking advantage of two UNM fumbles and two three-and-out drives that resulted in punts.

It was the ugliest loss in the Danny Gonzales era of UNM football and one the team would surely like to forget.

“Air Force out-physicalled us, which is really disappointing. We’re not good enough on defense yet to be so bad on offense and not get first downs.”

It was UNM’s first loss in conference play and their third consecutive loss after starting the season with wins over Houston Baptist and New Mexico State.

The Falcons were led by junior running back Brad Roberts, who rushed for 142 yards and a pair of scores on 29 carries. As a team, Air Force rushed for 408 yards and a 5.6 yard per carry average against Rocky Long’s defense.

Terry Wilson led UNM with 179 yards passing and one touchdown, with most of it coming in the second half when the game was well out of reach.

One bright spot for the Lobos was the play of freshman Luke Wysong. The first-year player from Cleveland High in Rio Rancho caught three passes for 70 yards.

Gonzales and the Lobos will look to end their three-game skid next Saturday on the road against a 4-0 San Diego State team that has victories over Utah and Arizona on their resume.