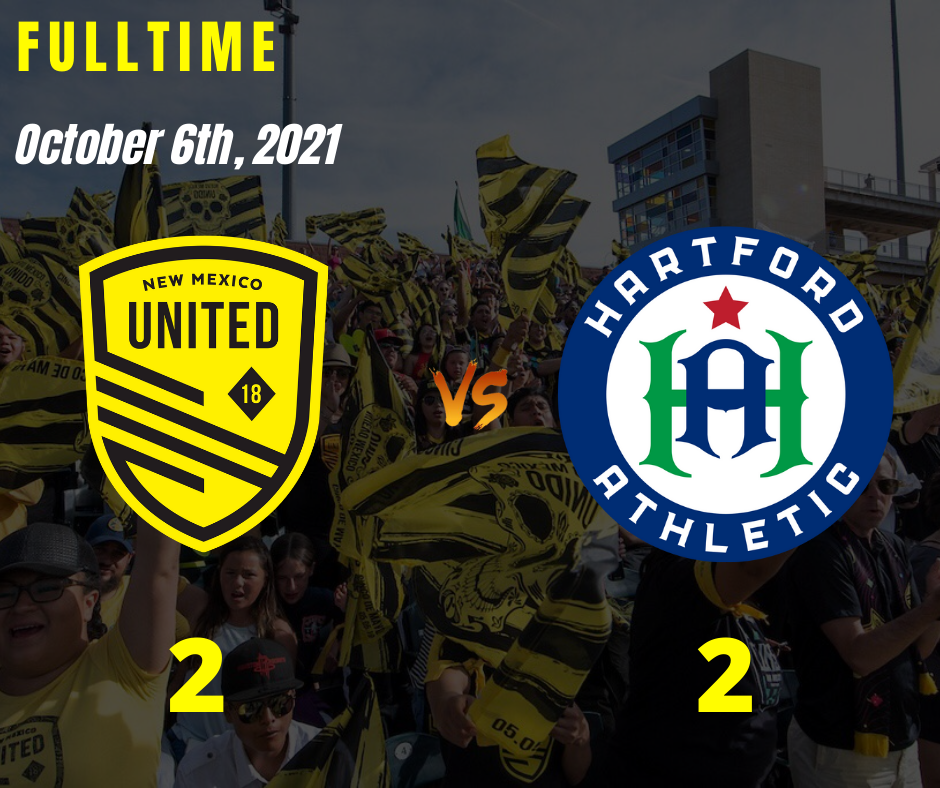 In one of the more unlikely results of the season, New Mexico United had to come from behind to earn a draw with Hartford Athletic. The return to The Lab was supposed to help propel United in the two matches at home this week. While the energy did help them pick up a point, it saw the club drop to 5th in the Mountain Division.

Hartford came in with an abysmal record over the past two months and was considered to be heavy underdogs. They were outplayed and overmatched for much of the night, but they would find opportunities and convert them.

Sergio Rivas opened the scoring in front of the home faithful. After Hartford committed a foul in the 25th that set up United for a free kick, they decided to run a designed set-piece play. The design saw Chris Wehan run from the spot of the kick into the box to receive a pass. He then lobbed it towards the spot where Rivas elevated above the defenders and headed the ball down towards goal. Hartford’s keeper, Matt Lampson, got a hand to the ball initially, but he was unable to keep it from crossing the line.

Despite playing well throughout the half, United was hit with a stroke of bad luck inside of stoppage time. Hartford sent a free kick into the box, and as Austin Yearwood was coming down from trying to defend it, his arm was in an unnatural position as the ball went off of it. Due to the positioning of his arm, the referee pointed to the spot, awarding the visitors a penalty. Alex Tambakis would guess the right direction, but couldn’t get a hand to Danny Barrera’s spot kick as it went into the bottom-right corner.

Three minutes into the second half, Barrera would contribute to another goal for Hartford. United conceded a foul deep in their defensive third setting up the visitors in a dangerous area. Barrera delivered the kick into the box where Juan Carlos Obregon could get a clean header. He was able to direct the ball down and into the bottom left corner to grab the lead, 2-1.

The second goal woke United up and they clicked back into gear. They started pushing for the equalizer and in the 55th they got it.

Yearwood, now playing on the right, took an opportunity to send the ball in on a cross, looking for Devon Sandoval. During its flight, the ball took a deflection off the head of Hartford midfielder Conor McGlynn. The deflection sent the ball the wrong way and caused it to dip where only Sandoval could get to it. He headed the ball into the net for the equalizer.

Both sides continued to create chances, but even with nearly seven minutes of stoppage, neither would find a winner.

Saalih Muhammad – In his second start for United since returning, Muhammad had another stellar outing. He connected on 96% of his passes, converted three tackles, and created an additional chance.

United has one more match on this homestand, welcoming RGV FC to The Lab on Saturday night. With only five matches remaining on the schedule, a win on Saturday is crucial to the playoff hopes of the club. Kickoff is scheduled for 5 p.m. (MT) on Saturday evening.