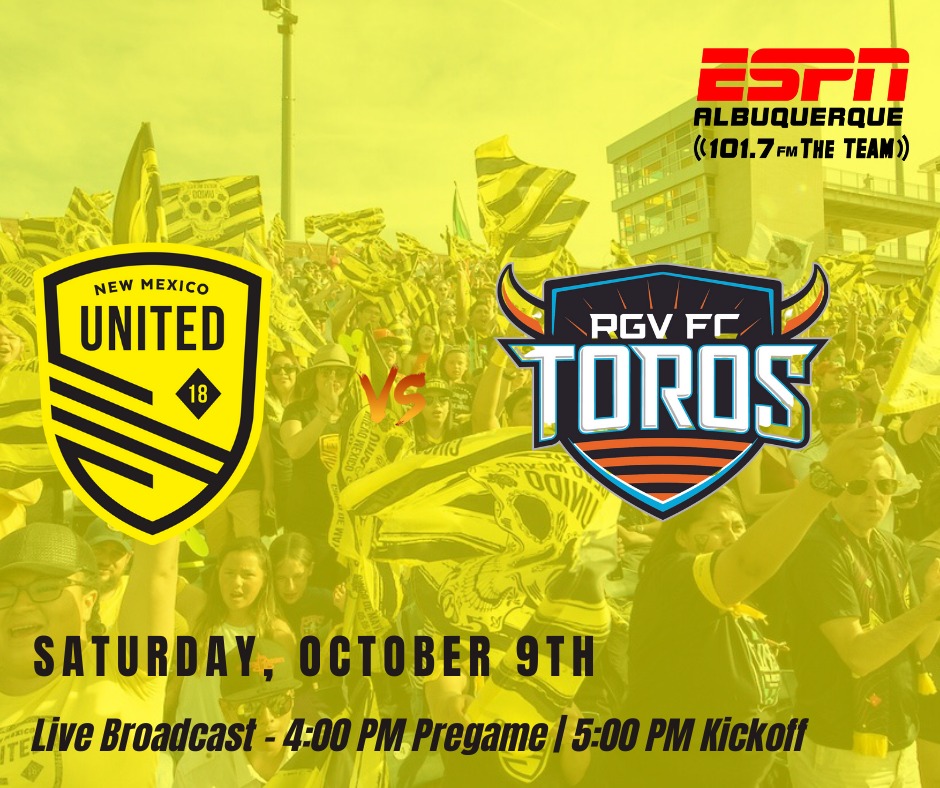 New Mexico United has put themselves in a position where every match between now and the end of the season is a must-win. While things were tight prior to the Hartford match, the potential for a six-point swing on Saturday night is something they have to take advantage of.

Rio Grande Valley FC comes to The Lab on Saturday night, also facing a must-win situation. Anything less than a win for either side puts their hopes for making the playoffs in dire straits. RGV sits two points adrift of a playoff spot and United one point. Not only would a win for one of the clubs put some distance between the two of them, but it could also settle the USL tie-breaker scenarios.

The Toros aren’t the same club that started the season off by taking the Mountain Division by storm. They haven’t been able to maintain the pace from earlier in the season and have struggled in the second half. Coming into the weekend, they’ve only won twice in the previous ten outings. During that time, they earned a total of nine points and haven’t shown a consistent ability to defend. That could be their Achilles heel in Albuquerque, where they just lost ten days ago.

Elvis Amoh – The leading scorer for the Toros has found his way onto the scoresheet three times in the past five matches. He has the ability to create mismatches inside the box and uses his height to his advantage.

United is on the verge of missing out on the playoffs for the first time in club history. There are several different possible causes for them to be in this position, and every one of them could have turned out differently. If United didn’t go seven matches without a win; if they picked up more points outside of the division; if the ball bounces differently a few times. The club could be in a significantly better position if anyone one of those scenarios went in their favor. Instead, they are on the outside looking in with five matches left.

United has shown improvement over the past month, even winning four of six at one point. They have been more aggressive since the return of Chris Wehan and have shown a lot more confidence across the pitch. Perhaps the biggest cause of the higher levels of confidence has been the play of the midfield in general. With some changes to team selection, Troy Lesesne’s men have been more adept at going forward, and the link-up play has improved drastically. All of that happened without seeing a drop-off in their defensive play. If they can find that against RGV, they will put themselves back into the playoff discussion.

Kalen Ryden – While this year hasn’t been Ryden’s best, he’s made a number of mental errors, he’s still the commander of the defense. Ryden has bounced back from injury and errors on the field and led United to a 7-1-5 record at The Lab. His play, specifically controlling Amoh, will be a key to this match if United is to pick up all three points.

Saturday’s match is set for a 5:00 p.m. (MT) kickoff from The Lab. The match will be streamed live on ESPN+ domestically and on YouTube for international viewers. Locally, the match can be heard on ESPN Radio 101.7 The TEAM. It will also be available via The TEAM app and website.