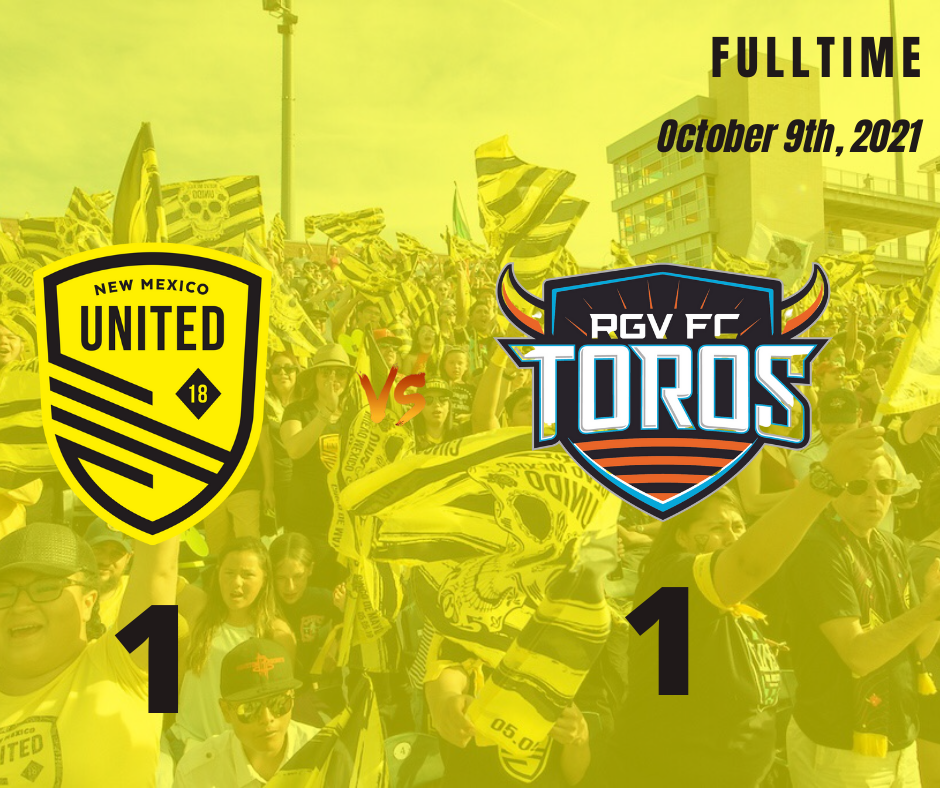 The Lab was host to a fast start on Saturday night, it just wasn’t one for New Mexico United. Rio Grande Valley FC came out with pressure up top and it forced an early error from Michael Azira.

Azira had dropped back trying to box out a Toros forward, but gave up the ball at the top of the eighteen. Kyle Edwards was able to pick Azira’s pocket and drew Alex Tambakis off of his line. Doing that allowed Elvis Amoh to sneak inside the box and put away the pass from Edwards for the lead.

Over the next twenty minutes, United continued to try and build up through possession but looked stagnant in terms of movement. Playing out of a 451, the goal was to control the midfield, which they were having success in doing. Entering the 24th minute, United looked to be taking control of the match after solidifying their play at the back. It was then that the hosts were able to equalize.

After taking the ball over the top, Sergio Rivas held it up long enough to allow Chris Wehan to make a run into the area. Rivas played Wehan in perfectly and he was able to slot home to pull level.

That was the extent of the offense for either side for the night.

From the 25th minute until the end of the match, only one other shot was on target. United controlled the flow of the match, but they couldn’t create chances. Several times throughout the match, United was mired in a lack of movement and couldn’t break through the RGV defense.

The Toros struggled with chance creation as well, but their issues were caused by the defensive play of United and not a lack of creativity. Ultimately, both sides picked up a point and as a result, New Mexico slid back into fourth place in the Mountain Division.

Chris Wehan – With his sixth goal since returning to the black & yellow, Wehan continues to be a dominant force for the club. It was also a return to form for the midfielder after having two matches where he wasn’t given as many opportunities to produce. The goal gives him 24 career goals with United in all competitive matches, only one back of Devon Sandoval for the title of all-time scoring leader.

Although it wasn’t the result they were hoping for, United is still in the playoff conversation. They don’t control their destiny however and will require favorable results from other league matches. For their part, United’s next chance to pick up points comes on Sunday when they face San Diego Loyal. This will be the first time the two clubs have faced each other in their history.