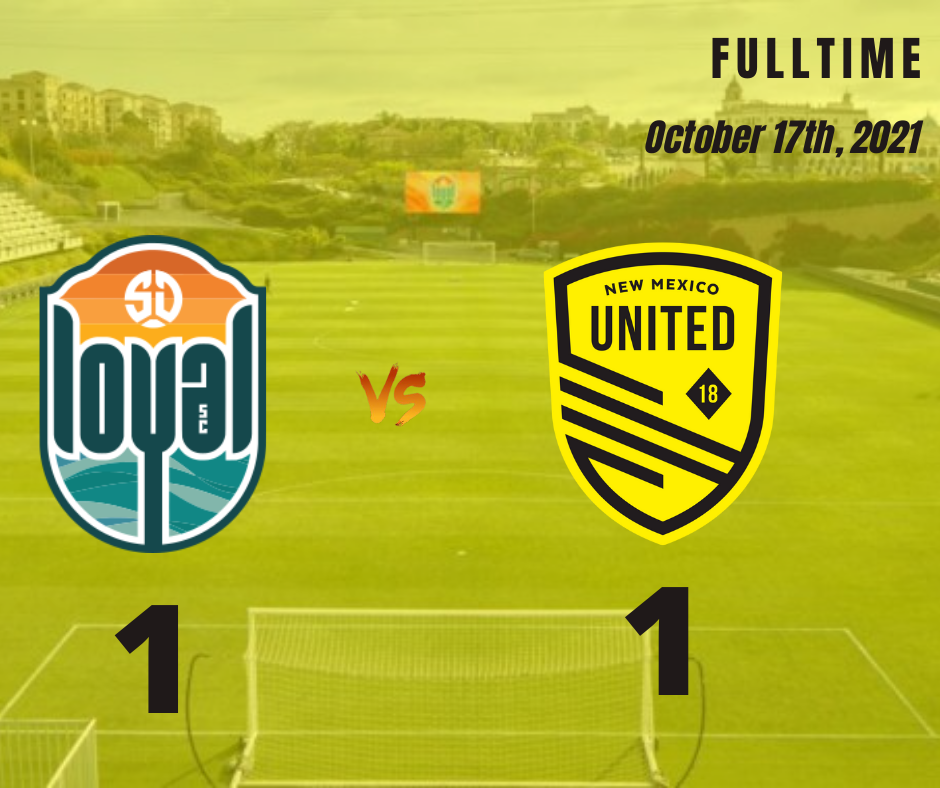 It wasn’t always pretty, but New Mexico United played their hearts out in San Diego and picked up a point for their efforts. Being able to do so against a San Diego Loyal club that is close to securing the second seed out of the Pacific Division is no small feat.

From the whistle, the play on the pitch was lively, with neither really taking charge early. Loyal looked to be the better of the two sides in the opening quarter-hour, but both struggled with the consistency of their touches. Neither side shied away from the physicality of the match, and at times it felt like a rivalry match.

United’s midfield, which consisted of Andrew Tinari and Juan Pablo Guzman, tried to establish a presence, and while they improved as the first half advanced, they each picked up an early yellow card. After the cards were awarded, they were forced to play more conservatively in order to avoid a second. Some of the calls that were made by the referee, including the one that resulted in Guzman’s yellow, were questionable at best and led to a growing frustration on the pitch.

Taking advantage of the home-field refereeing, Loyal round opportunities to put nine shots towards goal, but only put two of them on target. United, meanwhile, put four of six shots on target, forcing Austin Guerrero into action multiple times. In the 33rd, United nearly opened the scoring off of a set piece when Kalen Ryden drove a header low towards the far post, but Guerrero was able to grab it.

Defensively, United stood apart from their counterparts. The back line made very good reads and was able to cut off attacking lanes time after time. By not allowing Loyal to get clean looks at the goal, they kept themselves in the game and gave them chances to build out the attack.

In the second half, Loyal was able to finally break the deadlock off of a corner. Jorge Hernandez was able to get his head on the delivery from Cameron Dunbar and send it towards goal. The ball was directed down and inside the far post for the lead.

After the goal, United clicked into a higher gear and found enough space to put another seven shorts towards the goal in the final thirty minutes. Four of those shots were on target, but it wasn’t until the final one that they were able to find the equalizer. At the death, United earned a corner when Sergio Rivas played the ball off of a Loyal defender and let it roll out of play. Although the initial delivery was cleared, Saalih Muhammad recycled the ball back up the right wing to Chelo Martinez. Martinez took aim and sent a cross into the area where Ilija Ilic struck the ball with a leaping volley, leaving Guerrero no time to respond. The last-second stunner earned a point for United, sent them back into fourth place, and kept their playoff hopes alive.

Rashid Tetteh – Tetteh had another great showing and did it against one of the better clubs in the Western Conference this year. He had two tackles, two interceptions, and three clearances, including a fantastic goalline save. Tetteh has shown a lot of growth in his three seasons with the club and has been solid all year long.

United has two more matches this week, both of which could have significant playoff implications. The first of the two matches will be on Wednesday night at The Lab when United once again plays host to San Antonio FC. That match is scheduled to kick off at 7:00 p.m. (MT).