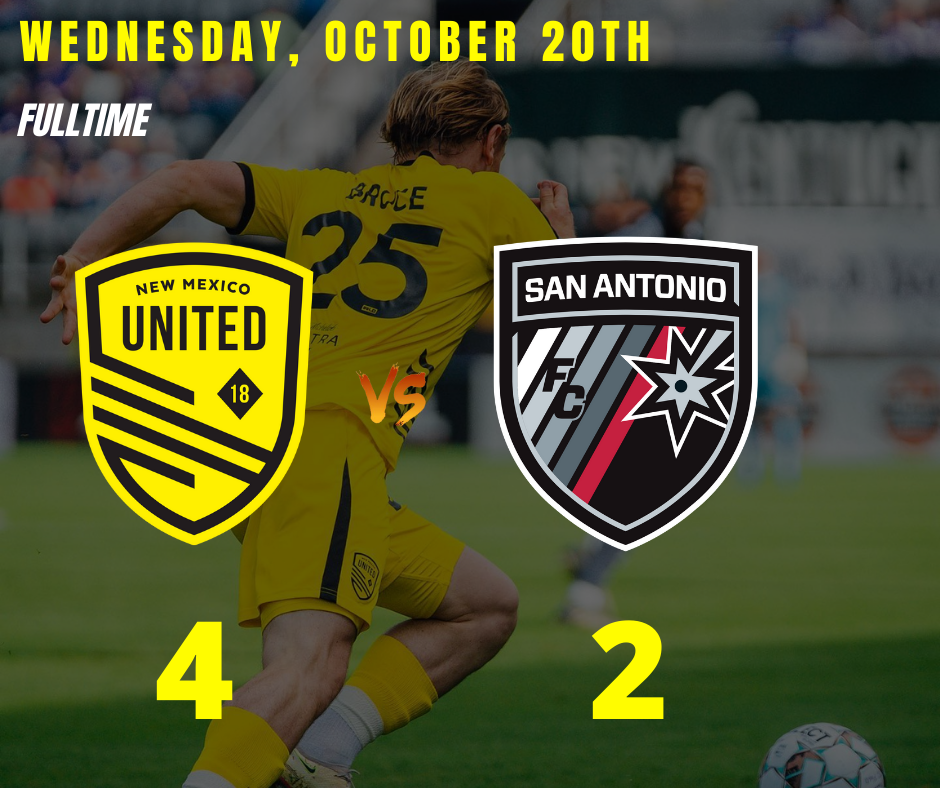 Faced with another must-win situation, New Mexico United not only had to come from behind against San Antonio FC, but they also had to overcome a referee who spent more time digging in his pocket than allowing play to continue. A trio of second-half goals propelled the home side to a much-needed three points in the playoff race.

The match started innocently enough, with United pressing the issue in the opening minutes. As a purple haze hung over the pitch due to a smoke bomb from The Curse, San Antonio withstood the early pressure and began to return it themselves. With the two sides settling into the match, it didn’t take long for the tone of the match to become apparent. The first of a recorded sixteen yellow cards were shown in the 9th minute, and shortly after, the hosts scored the first goal of the night.

As the clock passed the 11-minute mark, Chris Wehan made a slicing run across the top of the box and shot back across the goal. Matt Cardone dove to his left and was able to get a hand on it but was unable to corral the ball. The rebound fell straight to Ilija Ilic, the hero of the San Diego match, who cleaned it up for his third goal of the year.

It was in the twenty-first minute that the wheels fell off for referee Michael Radchuk. Over the next seventy minutes, he would show the yellow card fifteen more times, including one for Head Coach Troy Lesesne. Radchuk next made his presence known when he awarded a penalty to San Antonio in the 30th after Jose Gallegos went down during a corner kick. Nathan was given the opportunity to take the attempt, and he drove the shot into the bottom left corner for the equalizer.

Austin Yearwood was shown yellow in the 33rd for an attempted clearance hitting a San Antonio player in the back of the head. The resulting free kick gave the visitors a chance to take the lead. Joaquin Varela got onto the end of the cross, and although his first attempt was blocked by Alex Tambakis, he was able to clean up the rebound and put San Antonio ahead 2-1. Through seven minutes of stoppage time at the end of the first half, neither side would find another goal, and neither looked ready to back down from the style of play seen throughout the half.

The second half started much like the first half ended, with another yellow card. This one went to Ollie Wright of San Antonio, who would pick up a second in the 58th and be sent off for the remainder of the match. With a half-hour left to play and a man advantage, United needed to keep their foot on the gas and find a way to pick up some points. Wehan, who has been phenomenal since his return, had an opportunity in the 66th to make the clubs all square. Standing over the dead ball, twenty yards out, Wehan drove the ball towards goal. During its flight, the ball took a deflection off of PC and caromed into the right side of the goal.

Going level gave United a new sense of hope. Having already been involved in the first two goals for United, Wehan continued his dominance of the night in the 78th. Making a run up the left side of the box, Wehan put in another shot that Cardone couldn’t cradle. The loose ball once again fell to a United player, this time, it was Andrew Tinari that was able to slot home and retake the lead.

Wehan still had one more statement to make before the clock ran out on the night. Josh Suggs sent a low cross from the right wing to the left side of the box where Wehan was waiting. A powerful right-footed shot went off of Cardone’s hands once again, but this time into the net and not back into play. Now with a 4-2 lead, all United had to do was see out the rest of the match, and they were able to secure three more points in the final playoff push.

Chris Wehan – Over the course of the night, Beez put in nine shots and was involved in all four goals for United. With his brace, Chris passes Devon Sandoval and becomes the all-time leading goal scorer in all competitions for United.

Two matches remain for United, and their next test is only 72 hours away. On Saturday evening, United faces off with Rio Grande Valley FC for the fourth time this season. With a win, United will all but secure their playoff berth. The magic number for United sits at five points, but a win against the Toros will go a long way in the standings. The clearest path for the Black & Yellow is to win out, but there are other paths still available to them. Saturday night’s match will kick off at 6:30 p.m. (MT).