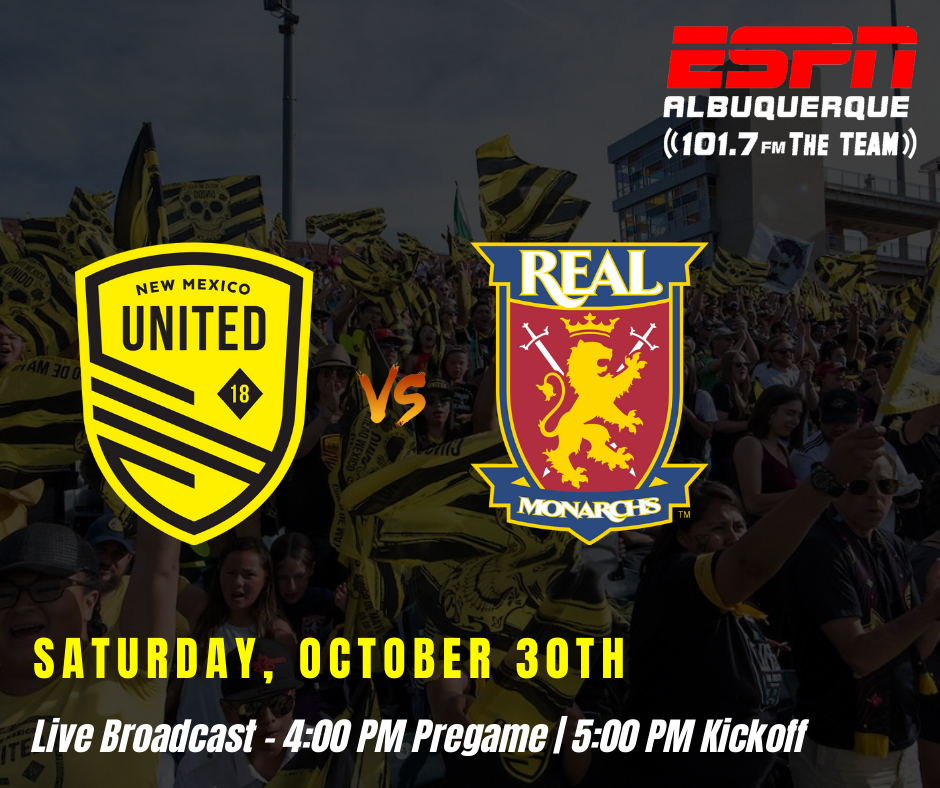 In a remake of the 2019 regular season finally, New Mexico United not only needs a win, but they also need some help from El Paso Locomotive FC. In the inaugural campaign, United came perilously close to missing out on the playoffs until a winner in the finale against Las Vegas Lights and a draw by San Antonio FC.

This time out, United is looking to pick up a win against Real Monarchs SLC, who are already eliminated from playoff contention. Despite that fact, the Monarchs have been playing better in recent weeks, having nothing to lose at this point. The Monarchs would like nothing better than to spoil the Dia De Los Muertos celebration and prevent United from making the playoffs. Even if United wins on Saturday, they still need help from El Paso to ensure that Rio Grande Valley FC doesn’t win as well. A win by RGV will end United’s season no matter what the result is from The Lab.

That is the easiest path to the playoffs for United at this point. A loss for United would eliminate them. Should they draw, things could get interesting. In the event that United draws with Monarchs, supporters would need to root for Austin Bold FC to win. If Bold wins, United draws, and RGV loses, the three clubs would end up level on points and create a three-way tie for fourth place. In the event that does happen, United would get the final playoff position due to the USL tiebreak scenario, in which the club earned the most points inside their division.

Before the final standings are known, though, the Monarchs will have something to say about it. The visitors come in with a record of 1-2-2 in their last five, with a win and over Austin and a draw with Colorado Springs. They’re showing some things that haven’t been seen all year and have already played spoiler to Bold in their quest for the playoffs. If they can repeat those two performances against United, the season could be over for the Black and Yellow.

Jeffrey Dewsnup – While the young Monarchs keeper hasn’t had what many would call a stellar season, the last time these two clubs met Dewsnup was lights out. That meeting saw Dewsnup register seven saves and if not for his performance, United could have walked away with a bigger goal differential.

United knows that this is their last chance in a season of missed opportunities. They’ll have to do it without Devon Sandoval and Amando Moreno, both of whom have been ruled out for the rest of the season. Without their two primary forwards, United will once again turn to Ilija Ilic at the top. With two goals in his past three appearances, Ilic has stepped up at a crucial time for the club. Ilic will have to be at the top of his game and work together with United’s midfield to open chances to take advantage of the young keeper.

The attack for United will have to start from the midfield. Chris Wehan has been dominant in the midfield since his return and will need to be again against the Monarchs. Wehan will likely draw the majority of the attention from the visitors, but that opens up possibilities for the rest of the team to get forward and have space to work in.

Ilija Ilic – It’s been a long season for Ilic. Despite having twenty-one appearances this season, he’s logged fewer than 700 minutes and has only scored three times. With the recent increase in minutes, Ilic could be finding some form just in time for a potential playoff run.

Saturday’s match is scheduled to kickoff at 5:00 p.m. (MT) from The Lab. The match will be streamed live on ESPN+.