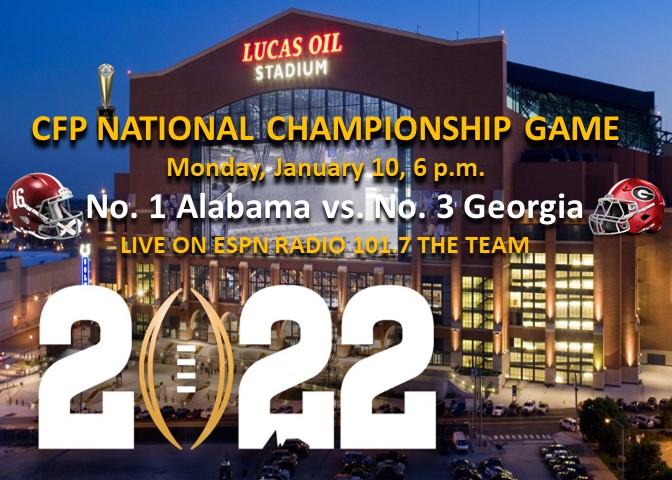 The bowl season is coming to a close.

After thrillers in the Rose Bowl, Sugar Bowl, Orange Bowl, where you should know where the venue is even though corporate names have been inserted, No. 1 Alabama will face off against No. 3 Georgia in the College Football Playoff Championship Game Monday night at 6. You can hear that game right here on The TEAM.

It’s the granddaddy of them all, well, no it isn’t, but it’s the “Big Game” as it’s for the national championship.

So after another holiday season of enduring such prestigious bowls such as the Union Home Mortgage Gasparilla Bowl, the TaxAct Camellia Bowl, Quick Lane Bowl, SERVPRO First Responder Bowl, Guaranteed Rate Bowl, Cheez-It Bowl and my favorite, Duke’s Mayo Bowl (any idea where to find Duke’s Mayo?), somebody will hoist a trophy after Monday’s game. A trophy that is supposed to mean more than the trophies that were doled out after all the bowls that have already been played.

And I mentioned the bowls that don’t have a location in the name, or at least a long known location.

And speaking of trophies, nothing beats the New Mexico Bowl trophy.

Be we digress back into Monday night’s game. After a not-so-interesting day of semifinals (how is a field of four a semifinal again?), we get the game most people have been looking forward to, or at the very least, expecting.

It’s a rematch of two SEC powers that saw a surprise ending (to some) in the first meeting when then No. 3 Alabama beat then No. 1 Georgia 41-24.

As was the case in the first meeting, Georgia is the favorite (2.5 points as I type this).

Will anyone ever learn? Even while throwing down Cheez-Its during the Cheez-It Bowl, I’ve believed all along that Alabama will host yet another national championship trophy for Head Coach Nick Saban.

Had the pundits tabbed The Tide as favorites, one would think Georgia would have the emotional edge as underdogs.

But to put The Tide as dogs again (yeah, I know they have some injuries), why don’t you just “let the dogs out” when it comes to making Alabama hungrier than ever.

When it comes to a Nick Saban team, I’ll believe it when I see it in terms of whether or not they’ll lose.

Georgia can absolutely win this game, but if you thought Alabama had a chip on its shoulder the first time last month, I don’t think we’ve seen anything yet.