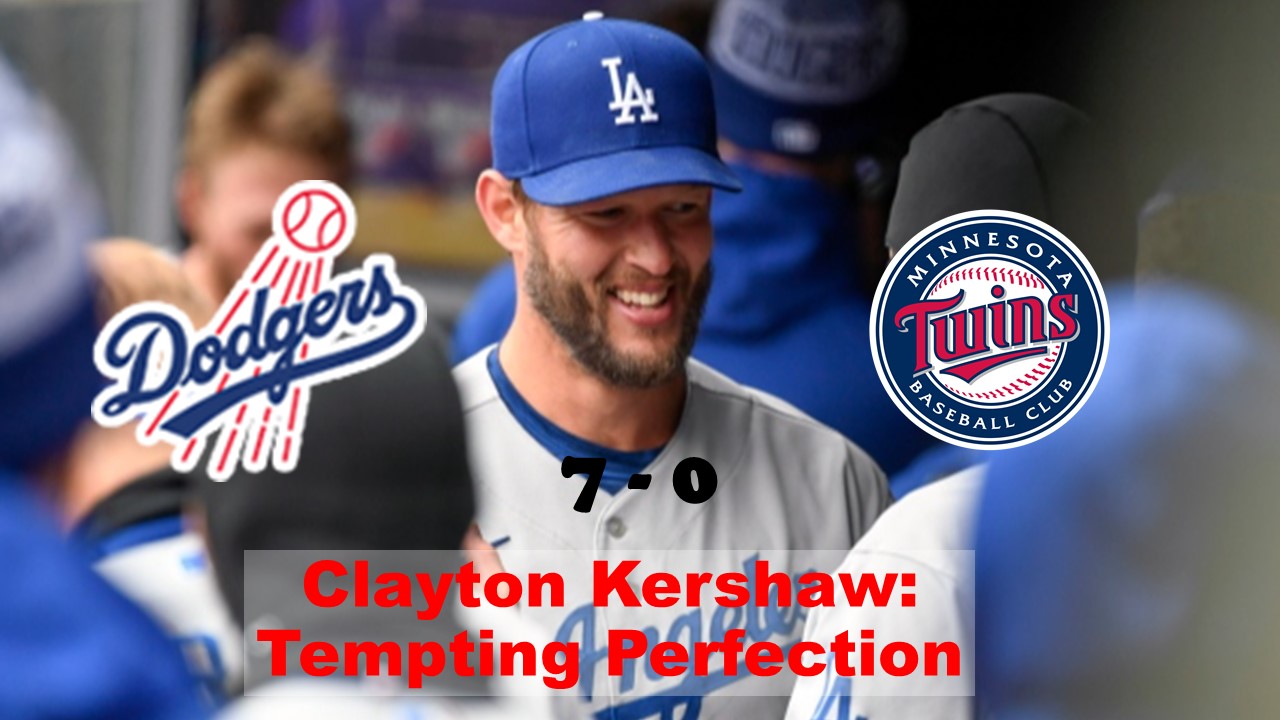 If Shakespeare was a sportswriter, he would write “To pull or not to pull – that is the question.” But that decision fell on the shoulders of Dave Roberts, the sage of Chavez Ravine. Now magnify it 100 percent when it comes to Clayton Kershaw, the Cy Young winning pitcher tempting perfection.

As it turned out, Roberts not only went to the left-hander to start the game, but also to make the difficult decision to pull him off the hill.

Kershaw was staring down history, as the Dodgers ace had mowed down 21 straight batters through seven innings in a frigid Target Field in Minneapolis.

He had thrown 80 pitches with 53 for strikes, when his day came to an end.

Reliever Alex Vesia took the mound and gave up the first hit to the Twins as Gary Sanchez singled to right with one out in the eighth.

Max Kepler earned a walk before Vesia got out of the inning. Justin Bruihl worked a perfect ninth inning to preserve a one-hit shutout in a 7-0 Dodgers’ victory.

Under normal circumstances, fans would be stoked that the Dodger pitching was matched with solid hitting as the Dodgers improved to 3-2.

But the nagging thought of what could have been will hang over the game. Kershaw was unhittable with a breaking ball and slider that made the Twins batters look like they were swatting at pinatas.

But 80 pitches were more than Roberts could have imagined and the decision which seemed mutual was for Kershaw to come out and let the bullpen do its job.

The fan outcry was deafening, but the media outcry was quite extensive, including cries that it was “bad for the game” to not let Kershaw continue to shoot for perfection.

I have had the opportunity to cover a perfect game years ago.

It was a Sunday afternoon, July 28, 1991, at Dodger Stadium when Dennis Martinez tossed a perfect game that lasted all of 2 hours and 14 minutes as the Montreal Expos blanked the Dodgers 2-0.

But that was a different era of baseball when starters were the workhorses who pitched with the focus of tossing the final pitch. Now, starters are just that, starters. Another argument that makes sense is that Dennis Martinez pitched on July 28 and the Dodgers are too early in the season to have Kershaw pitch to the end. Maybe under better conditions, later in the season and tossing from the mound at Dodger Stadium, Kershaw might have another opportunity at perfection.

When everyone calms down and cooler heads prevail, it all comes back to whether to risk an injury, or risk down the road, the infamous dead arm as the Dodgers go thru the season with a World Series title as their goal.

Yet, there is no doubt that for seven innings, Kershaw was unhittable and perfect and will live to pitch another day.

We’ll never know if Kershaw could’ve crossed the finish line with a complete-game perfect game, But as Shakespeare the sportswriter would have said, “This above all, to thine own team be true.” On that day Kershaw pitched for the name in the front and not the name on the back.