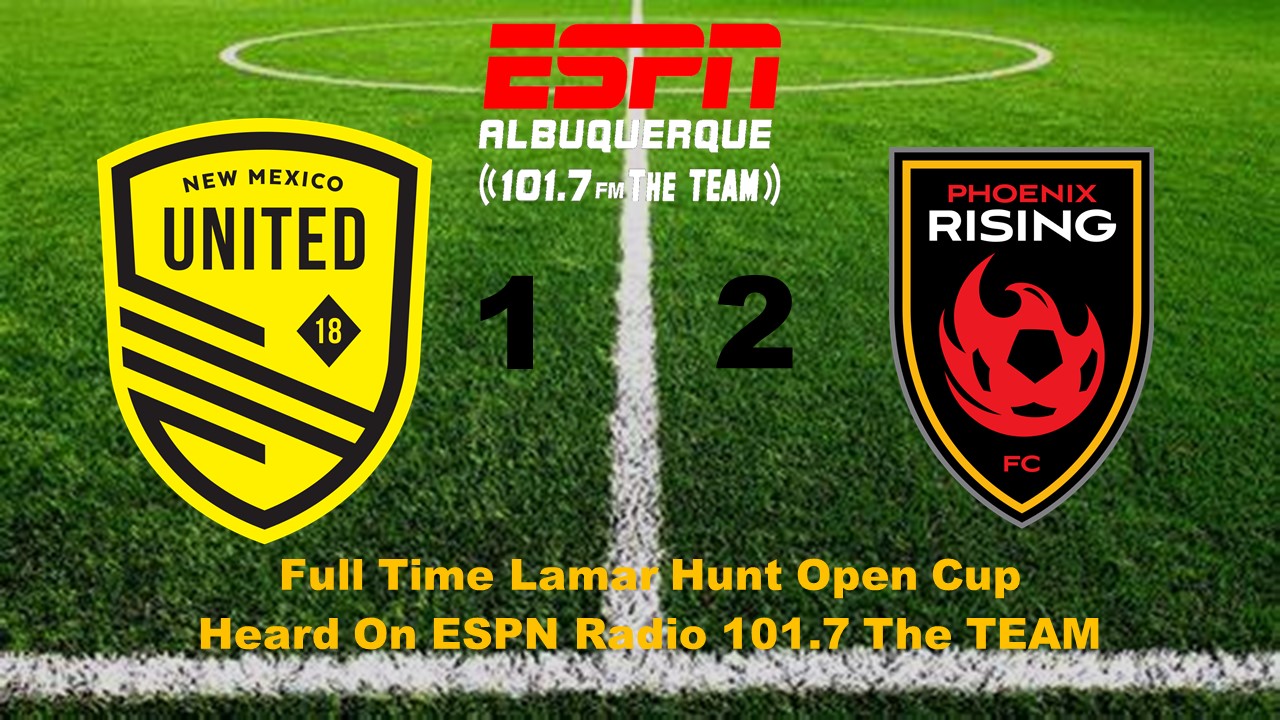 New Mexico United’s run in the 2022 US Open Cup came to an abrupt halt on Wednesday night. Zach Prince and company ran into a Phoenix Rising FC side that has begun to hit its stride.

The midweek match didn’t start off as fast-paced as the match over the weekend, but it didn’t remain scoreless for long. In the 6th minute, Joey Calistri made a run down the right side of the pitch and looked to put the ball into the box. His delivery took a deflection off the head of Will Seymore and looped towards goal. The ball fell in an awkward spot, and as Ford Parker attempted to make a play on it, the ball went off both the crossbar and his hand before settling in the net.

While the early deficit could have been demoralizing, United continued to press and played their way into the match. Gradually the statistics and the visual test leaned in their favor. Zach Prince was forced into an early substitution after Sam Hamilton went down in the first half. In his place, Tabort-Etaka Preston came on and his pace had a noticeable impact on the remainder of the match.

Another change came at the half for United, with Raddy Ovouka replacing Daniel Bruce. Ovouka added a physical presence that United had been lacking and drew the attention of the Rising players.

Just after the hour mark, Neco Brett finally found an opening and took full advantage of it. Harry Swartz sent a scorching ball over the top looking for Brett in the Phoenix half of the pitch. Brett split the defenders and slotted the ball around Ben Lundt for the equalizer.

Things were looking good for United when Santi Moar made a surprise appearance after it had been reported that he would be out with an injury. Moar’s only significant impact on the match came in the 81st when he headed a cross into the area for Greg Hurst. As the ball came in for Hurst, Parker moved to cover the near post. Hurst was able to get a good touch on the ball and headed to the far post to retake the lead for the hosts.

Phoenix would go on to hold off United over the remaining fifteen minutes to advance to the Round of 32.

Ford Parker – Parker was unfortunate to have the two goals get past him, but he made several saves that prevented Rising from extending their lead. He acquitted himself well and stood tall against one of the toughest clubs in the USL.

United’s next match is right around the corner, with San Antonio FC coming to The Lab on Saturday, April 23. That match is scheduled to kickoff at 7:00 p.m. MT.