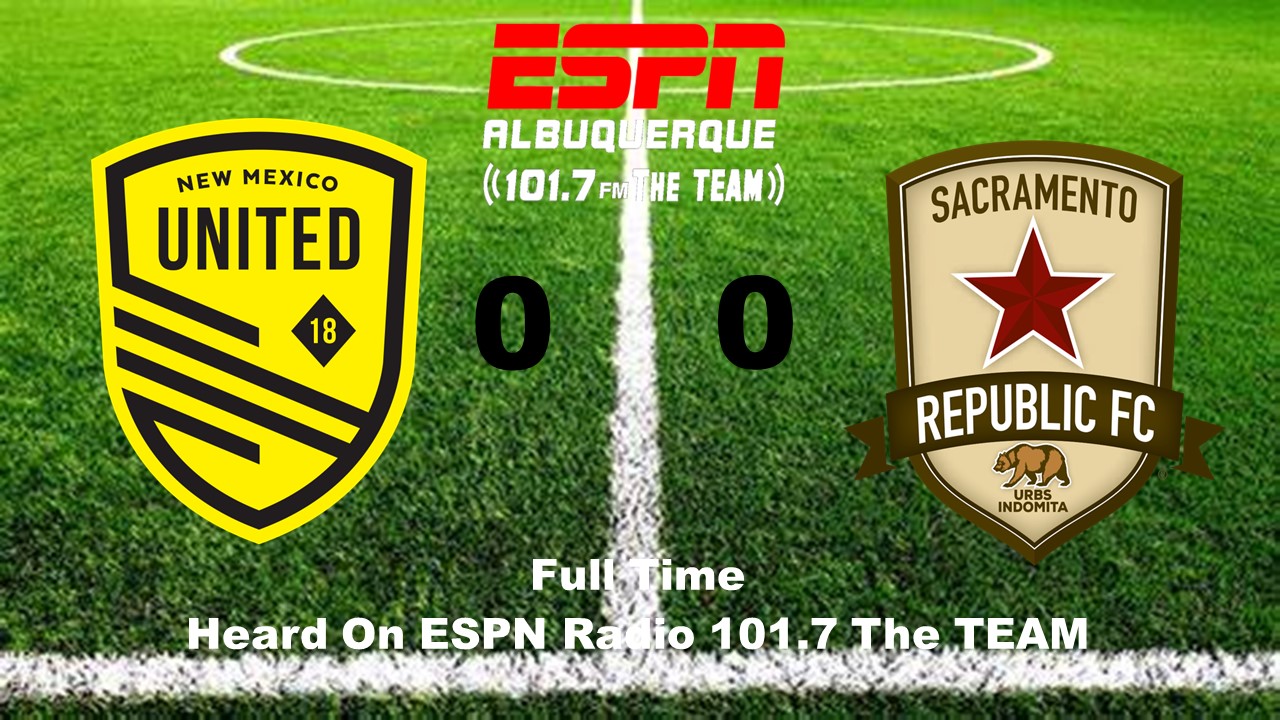 Once again, New Mexico United played well enough to win, but they didn’t do enough to pick up all three points.

Against another of the expected Western Conference playoff contenders, United wasn’t afraid to press the issue and tried to break the match open early. In the fourth minute, Tabort-Etaka Preston caught the Sacramento keeper, Daniel Vitello, off of his line and launched a shot from near the center circle. Preston came within inches of putting United ahead as the ball glanced off the outside of the post.

In the 19th, Neco Brett had another opportunity as well. Vitiello made another mistake that nearly gave the visitors a goal. On a ball that came in over the top, Vitiello came off of his line and headed the ball. But, instead of clearing it, the ball fell to Brett inside the box. With a leaping header himself, Brett attempted to put the ball on frame, but he didn’t have enough power behind the header to put it into the net before it could be cleared away.

Throughout the match, both clubs were hampered by the state of the pitch. From the opening minutes, players were constantly slipping or going to ground even without any contact with another player. The pitch also began coming up in places and divots were being left from players attempting to get under the ball. Because of the condition of the field, players were visibly trying to be aware of the movements they were making or slowing themselves down so they didn’t slip. One such moment came from Cristian Nava late in the second half. After making a Sacramento defender miss, Nava took more time to turn and steady himself before heading down the pitch. That momentary concern for how he was moving allowed the hosts to catch back up to him and prevent a dangerous attack from unfolding.

Into the 86th the two clubs went, still scoreless. It was then that Luther Archimede got the better of Kalen Ryden, who made his return after missing several weeks. Archimede was able to get in behind Ryden and put himself into a one-on-one play against Ford Parker. Parker, who made his first league start of the season, came off of his line and took down the attacker inside the box for a penalty. For a moment it appeared that Parker could potentially receive a red card for the foul, but was fortunate to only receive a yellow.

The ensuing penalty kick was taken by Rodrigo Lopez, who had been perfect in four attempts so far this season. Lopez appeared to have Parker fooled, but skied the attempt well over the bar, allowing the match to remain scoreless.

United would get one final opportunity off of a corner late into stoppage time, but they couldn’t find a clear chance on goal for a potential winner.

Austin Yearwood – Yearwood could do no wrong in Sacramento and was rightfully praised on the broadcast for his efforts. Defensively, Yearwood shut down multiple attacks by the hosts and showcased his ability to help get back in recovery. On the night he tallied one clearance, one tackle, one blocked shot, and two interceptions.

United has a short turnaround before their next match this weekend. On Saturday, the club will welcome Landon Donovan and San Diego Loyal to Albuquerque. That match is set for a 5:05 p.m. MDT kickoff from The Lab.