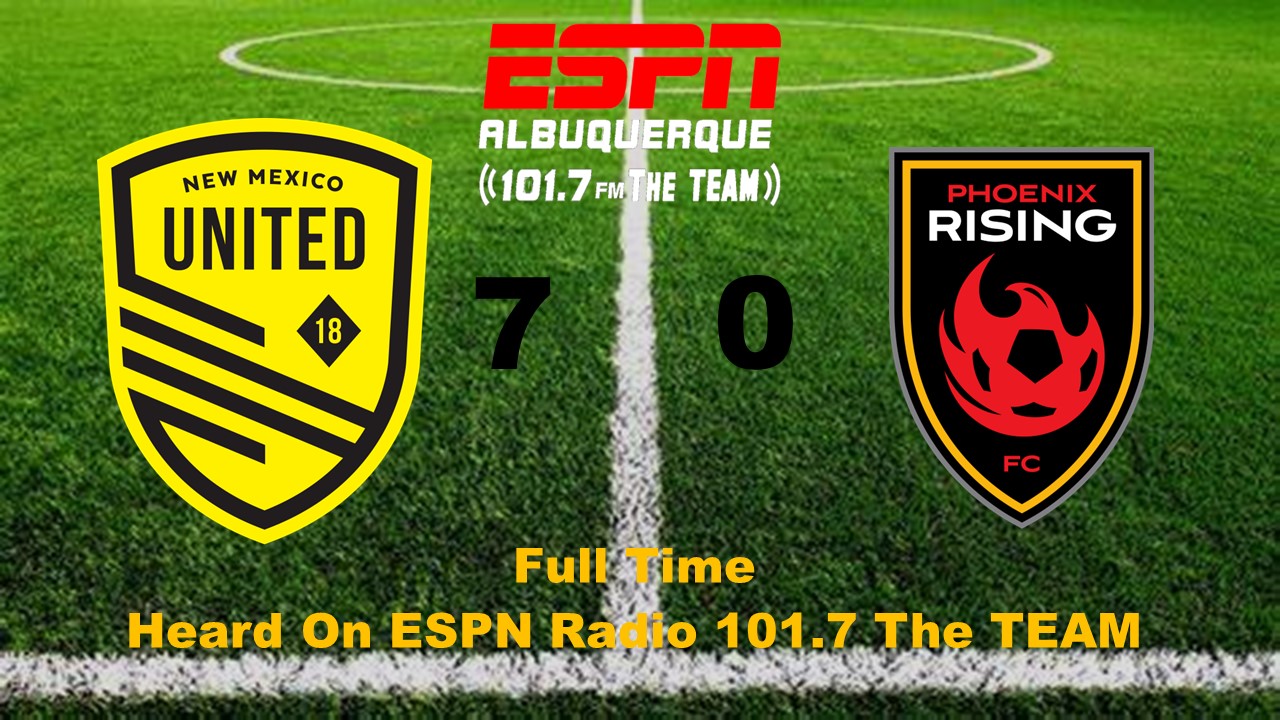 It was all systems go for New Mexico United against a depleted Phoenix Rising FC squad on Tuesday night. Rising was without many of their first-team players due to the league’s COVID protocols and gave opportunities to several academy products. In a match that had been rescheduled from the weekend, it was always going to be a tall task for the visitors to pick up any points on the road.

Zach Prince’s squad didn’t make it easy on them either. Cristian Nava drew a foul while driving through the middle of the pitch inside the 6th minute giving United an early set piece opportunity. From 25 yards out and straight ahead, Chris Wehan was called on to threaten the south goal. Wehan put his laces through the ball and drove it into the left corner for the opener, leaving the Rising keeper, Edward Delgado, flatfooted.

Four minutes later, Wehan got involved once again, this time drawing a penalty. Justin Portillo was assigned the chance to take the spot kick and slid the ball into the bottom left corner and outside of the reach of Delgado to double the lead.

The set pieces drawn up by Prince continued to pay dividends in the first half when United found their third goal of the half. Setting up for a corner under the scoreboard, Nava played the ball short to Wehan. As Wehan played the ball farther out to Portillo, on the opposite side of the pitch Harry Swartz made a twenty-plus yard run unmarked to the far post. With no one around him, Swartz was allowed a chance at a free header and once again found the back of the net.

A fourth would come for United just before the half-hour mark. On the far side of the box, Swartz was dragged down and once again the referee pointed to the spot. Portillo was given the chance again and the decision paid off. Going to the right side of the net this time, Portillo picked up a brace and extended the lead to four goals.

Unfortunately for Rising, the second half didn’t see any improvement in their chances. United remained on the front foot and continued to press their advantage. Time and again, United found themselves in favorable positions and kept taking advantage of them. In the 75th the lead grew to five after Darnell King gave up an own goal after another set piece from the hosts.

Nava would pick up his first professional goal for the club against their rivals in the 79th. Picking up a loose ball in the Rising side of the pitch. Driving towards goal, Nava went one-on-one with Delgado and slotted the ball past him, causing the supporters to let loose.

To close out the night, Nava was again involved creating an opportunity for Daniel Bruce. Into the 82nd, United had a three-on-one advantage with Bruce, Nava, and Sandoval all closing on goal. Nava passed the ball to his left to the open Bruce who closed out the night in style for United with their seventh goal.

Cristian Nava – One goal, one assist, 15 duels won, two chances created. There was nothing Nava couldn’t do on the night and he was one of the best players on the pitch. The goal was the first professional goal of his career and there will be many more to come.

United return to action on Saturday when they play Indy Eleven in Indianapolis.