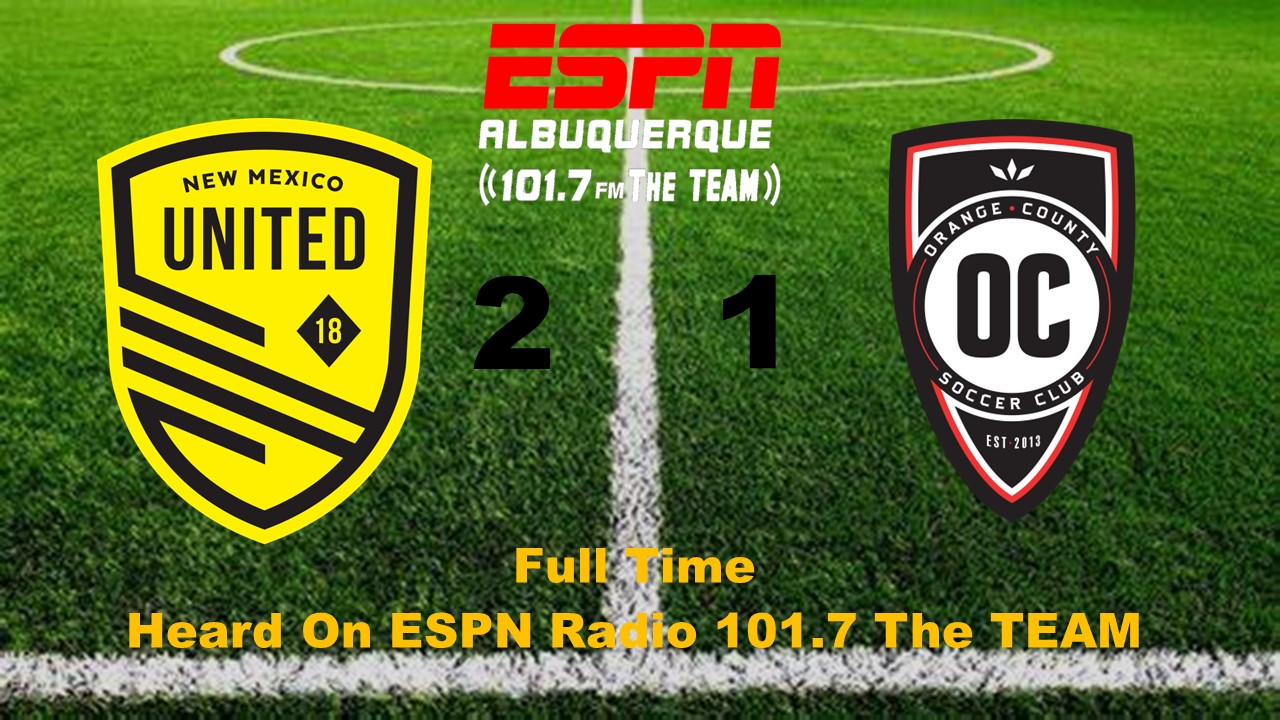 Somehow, New Mexico United took everything Orange County SC could throw at them and then some. What was a comfortable two-goal first-half lead turned into a last-second win for the visitors.

United started off on the right foot and looked to try and control the early run of play. Neco Brett was finding space in the final third and was harassing the Orange County defenders often. His constant pressure forced the hosts to try and make adjustments to slow down the Jamaican forward. Despite their efforts, they couldn’t quite accomplish that task and resulting in Brett earning a penalty in the 16th.

For the third time in a matter of weeks, Justin Portillo was given the chance from the spot. Portillo was once again up to the task and drove the ball into the bottom left corner for the opening goal of the night.

As the clock passed the half-hour mark, United jumped on a misplayed ball by Orange County and went on a counter. Tabort-Etaka Preston was off and running, forcing Orange County on their heels. He wasn’t alone in the push forward as Brett and Chris Wehan were both charging ahead as well. Preston’s patience and vision picked out the run from Brett into the center of the area and a perfectly weighted ball was sent in. Unable to get the shot off himself, Brett continued to the right side and held the ball up, and the attention of the defenders, long enough to allow Wehan to finish his run.

Laying the ball off to Wehan in space allowed him an opportunity to face the keeper one-on-one. With a neat finish to the left side of the netting, Wehan doubled the lead for United.

Richard Chaplow, the Orange County manager, decided that it was time to make a change. Even before the break, Chaplow saw that he needed to do something in order to get his club back on track. In the 37th, Sean Okoli was sent on and with the substitution, the hosts drastically changed their system.

Mere moments after entering the match, Okoli had a chance to pull one back, but couldn’t get his feet firmly planted and sent a shot well left of target. From that point forward, Okoli and Orange County dictated the play on the pitch.

United could barely string together a series of passes before Orange County picked up their forward momentum and put them back on their heels. As in the prior meeting this season, the pressure continued to mount until Milan Iloski made his presence felt. It again came in stoppage time as United failed to mark Iloski at the top of the box. A long throw-in from the far side got headed up into the air before falling directly to the forward. On the volley, Iloski managed to put the ball past Alex Tambakis, who prior to the goal had made five tremendous saves.

The hosts weren’t done yet. In the final seconds of play, Cubo Torres attempted to track down a ball over the top inside the area. His feet appeared to tangle with those of Kalen Ryden, and he went down, prompting the referee to point to the spot.

Torres opted to take the spot-kick himself and with the match on the line, gave a slight hesitation in his run up to the ball. Going to the lower left corner, Torres didn’t have enough on the ball to get it past Tambakis who guessed the right direction, stopping the shot and preserving the three points for United.

Alex Tambakis – Tambakis single-handedly kept United in the match tonight after Okoli came on. Credited with six saves on the night, Tambakis did enough to earn a clean sheet, but it wasn’t meant to be. Time after time, Tambakis made a spectacular save to keep the surging Orange County off the board and secured United’s fourth consecutive win.

United has a ten-day gap until its next match in California. That match will see United take on Oakland Roots SC for a midweek clash. That match is set to be played on Wednesday, June 15.