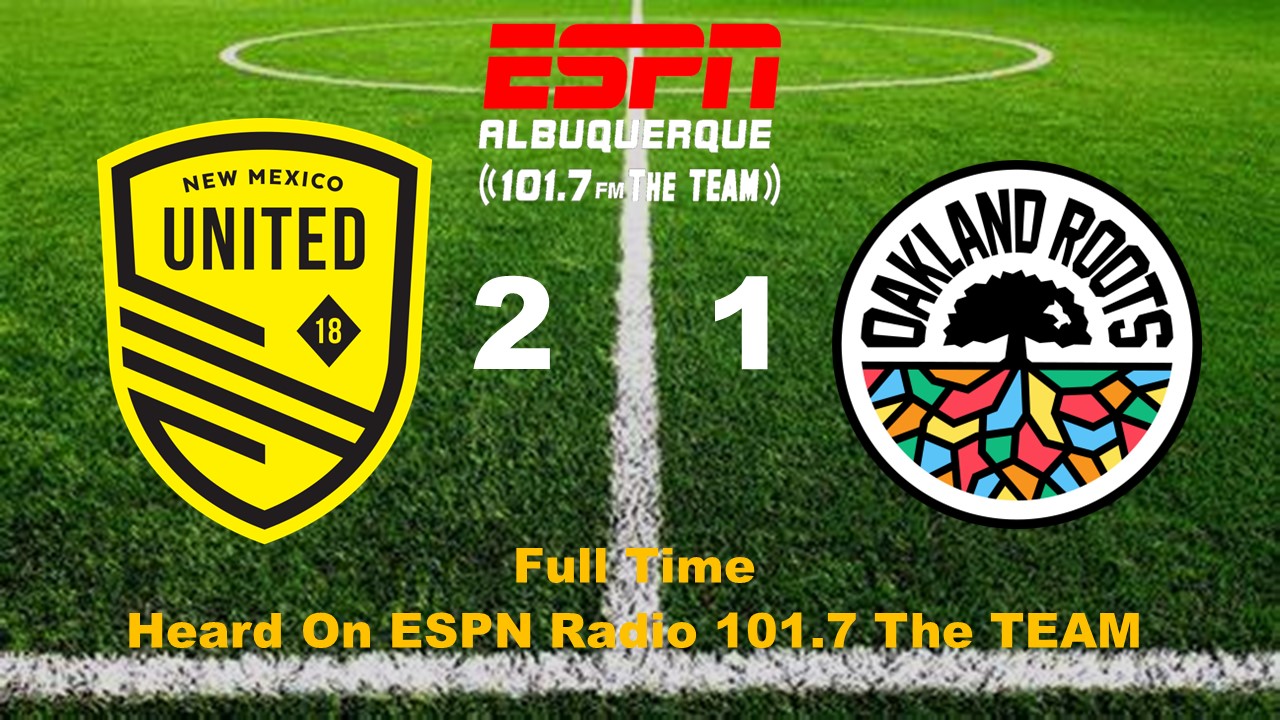 New Mexico United started the mid-week showdown with Oakland Roots off on the right foot with their aggressive press and ended it after rallying back from a first-half deficit.

The visitors came out strong and in the opening quarter of an hour, the press was giving Oakland fits as they struggled to get the ball out of their defensive third at times. United came close to nicking the ball off of a defender multiple times, but they couldn’t force a bad enough mistake out of the Roots that they could take advantage of it.

While the press was having an impact in the early going, the rest of the action looked uninspired and altogether flat. United was moving the ball around, but the creativity was lacking and no one on the pitch was finding ways to get the ball into the strikers, Neco Brett and Tabort-Etaka Preston. In the first forty minutes of the match, the duo combined for only seventeen touches. That few touches weren’t going to get the job done for United and Zach Prince would see to some changes early in the second half.

Oakland meanwhile was able to step up and find the opening goal in the 20th. Edgardo Rito, the right-back for Oakland, pushed the ball up the right side of the pitch, where Harry Swartz tried to meet him. Rito was able to get around Swartz and push the action into the box. Seeing Kalen Ryden slow to respond, Rito put a shot into the bottom left side of the net to take the lead.

The best opportunity of the half for United came just seconds into stoppage time. A long ball over the top sprung Brett into space and drew out the Roots keeper. With the keeper well out of position, Brett had an open look but hesitated to take the opportunity allowing Oakland to reorganize at the back. The sequence ended with United getting a shot off, but it was handled well by the defense and safely cleared.

After the break, Cristian Nava was subbed on for Preston and it immediately paid off for United. He began his appearance by picking up a hockey assist. In the 58th, Nava sent a ball behind the Oakland defenders for Sergio Rivas, who had moved up top alongside Brett. Cutting in from the right, Rivas found the ball at pace and squared it to a waiting Brett who was able to slot home for the equalizer.

Nava remained heavily involved in the play throughout the second half both offensively and defensively. In the 67th he would receive a pass deep in the Roots final third and had enough space to turn towards goal. In doing so, Nava turned around Jose Hernandez and beat him into the box. The space created by Nava gave him plenty of time to cross the ball towards the penalty spot, where Chris Wehan calmly headed the inch-perfect cross into the back of the net to give United the lead.

With time running out on Oakland’s chances to find a late goal, the match grew in intensity as both sides began to draw multiple yellow cards for foul play. The physicality came to a head just in stoppage time when Memo Diaz and Jerome Kiesewetter had a scuffle on the far sideline. During the altercation, Kiesewetter let his hands go up to the neck of Diaz before shoving him into the ad boards. Diaz also took a swing at the United forward, but it was Kiesewetter who received a red card for violent conduct while Diaz received no caution for his actions.

In the closing moments, Oakland had one final chance when Ottar Magnus Karlsson came streaking in from the right for a ball in the box. He managed to get a foot to it, but the quick reaction of Alex Tambakis to come off of his line killed off the attack and secured the win for United.

Cristian Nava – Nava’s insertion into the match provided a much-needed injection of creativity and energy into a midfield that had been sleepwalking through the match. The eighteen-year-old was directly involved in both goals and continues to show off his skills at a high level and how much development is taking place during training.

United will return home after a three-match road trip with a five-match win streak propelling them into third place in the Western Conference standings. In their first match at home in nearly a month, United will welcome Rio Grande Valley FC as they look to defend their winning streak before a weekend showdown with Birmingham Legion. The RGV match will take place on Wednesday, June 22 at The Lab.