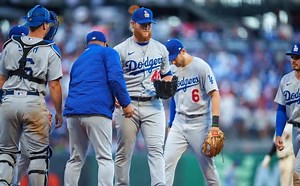 They own one of the league’s top offenses. That is, except in clutch time.

For good reason, the Dodgers receive a ton of praise entering every season. They are viewed as the best team in baseball, the one that every other team has to chase and try to take down.

To be fair, the Dodgers consistency live up to those expectations. The team has paced the National League in runs scored in each of the last four seasons (fourth in the NL this season).

But not enough of those runs have come when they are most needed: in extra innings.

Major League Baseball is in its third season using a new rule for extra innings, which allows teams to start their half of the inning with a runner at second base. The rule change took effect at the beginning of the COVID-shortened 2020 campaign.

For a lineup as offensively potent as the Dodgers’, that should be like hitting the jackpot in close games. When the game is on the line and each team is in desperate need of a run, good luck against these guys, right?

Over the course of a full regular season, 29 games is still a relatively small sample size. In trying to make sense of how a team this offensively dominant could struggle that much in clutch moments, it is a large enough sample to catch fans’ attention.

Before Dodgers fans revert to their default, this one does not fall on Dave Roberts. Sorry, you’re going to have to find something else to fire him for.

These numbers don’t take away from the Dodgers’ case for being baseball’s best team over the last decade. But with several high-profile roster additions and the elusive World Series coming in the 60-game marathon season in 2020, the pressure and expectations have reached an even higher level over the last few years. Good or bad (especially bad), everything that happens on the field gets put under a microscope more than most teams around baseball.

Living with that day to day over a 162 game season must be excruciating.

Whether you like the rule or think it is ruining baseball, it is here to stay, at least for now. The Dodgers are going to have to make the best of it.

On TEAM Talk this week, Joe and Sam talked about the Dodgers’ late-inning struggles at the plate and on the mound.