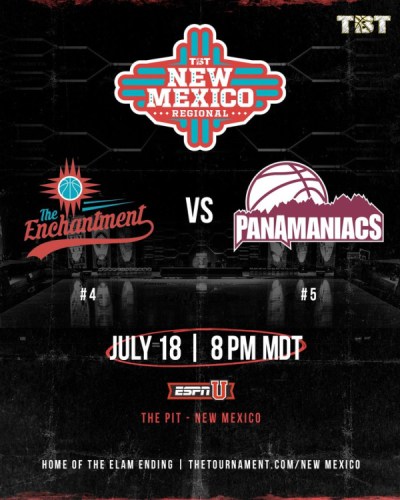 Tuesday, June 21 was officially the first day of Summer.

Summer is a time to fire up the barbeque, jump in the pool, and enjoy time in the sun.

On Wednesday, summer, for some, became a time to look forward to basketball season, as well as a summer event which is coming to the Pit.

The name of the event is summed up in three letters, TBT (The Basketball Tournament). And this year, the Pit is one of eight regional sites for the event.

Whereas we all knew the event was coming, along with the dates, July 18-21, it was Wednesday where we found out the matchups for the eight teams fighting for a spot in the quarterfinals in Dayton.

The matchups for the New Mexico Bracket are Heartfire vs. Competitive Choice, LA Cheaters against Ram Up, made up of former Colorado State players.
Challenge Als will take on Once a Bronco, made up of former Boise State players.
And last, but, not least, it will be Enchantment with former Lobo starts against Panamaniacs with former New Mexico State stars. The winner of this game moves on to play the winner of Heartfire and Competitive Choice.

While there are eight teams in this bracket, the two teams that many want to see will be looking to knock each other out in the first round.

Oh yeah, it’s the Lobos and the Aggies, on the basketball court, in the heat of the summer. If that doesn’t make you look forward to basketball season, what will.

This event, and this matchup, should be sufficient to keep the basketball flame burning.

The smack talk alone should be a lot of fun for the next couple of weeks.

As a rivalry, New Mexico/New Mexico State has always brought the heat on the basketball court. There has been an all-star game at the Pit between the two school’s alumni stars, but this game and bracket will be different.

TBT, The Basketball Tournament ultimately has a 1-million-dollar winner-take-all prize dangling as the carrot on a string.

It’s a shame this is a first-round game, but the quality of play could be very-very good throughout. And it can be enjoyed either in person, and if you’re in town, I highly encourage you to buy your tickets, or on ESPNU.

Former Lobo and NBA star Kenny Thomas is The Enchantment head coach and he summed up the matchup.

“It’s a great opportunity for the State of New Mexico, being able to come back for another opportunity to do this TBT thing again,” Thomas said at a press conference Wednesday. “It was an unfortunate situation last year, but now we have another chance. And there’s been a lot of amazing work put into this by Brandon Mason (team GM) to have this event in the Pit.”

Having the eight-team bracket in the Pit gives the community, and the State of New Mexico basketball fans a chance to support their teams.

Giddens summed up his thoughts on the matchup with the Panamaniacs.

“First off, I bleed Cherry and Silver so I’m happy to go out in the Pit and represent the State of New Mexico, especially against the Aggies,” Giddens said. “I think this is good basketball and it’s a matchup that everyone wants to see out here. Everybody knows me and the way the game ended last year left a bad taste in my mouth. I’m definitely fired up to play.”

Last year’s loss is motivation for this year’s team to get over the first-round hump and make it far into the tournament.

“I think this roster, this year, we thought about it a bit more, and hopefully we’ll have a better fit,” Giddens said. “You get to come out and see some of your favorite Lobos from whatever time period it was. We’re going to try to be together and try to do our best and I think it’s a great opportunity to see us all in the same place at the same time because my kids don’t know who I am, but they know who Anthony Mathis is.
For Lobo fans of all ages, this is a great opportunity to come out to see your former Lobos play versus the team we want to beat the most.”

Giddens and Co. have the right mindset in trying to beat the Aggies.

What makes this fun, is whoever gets the victory, it’s only the beginning of three great summer days of hoops inside the Pit.