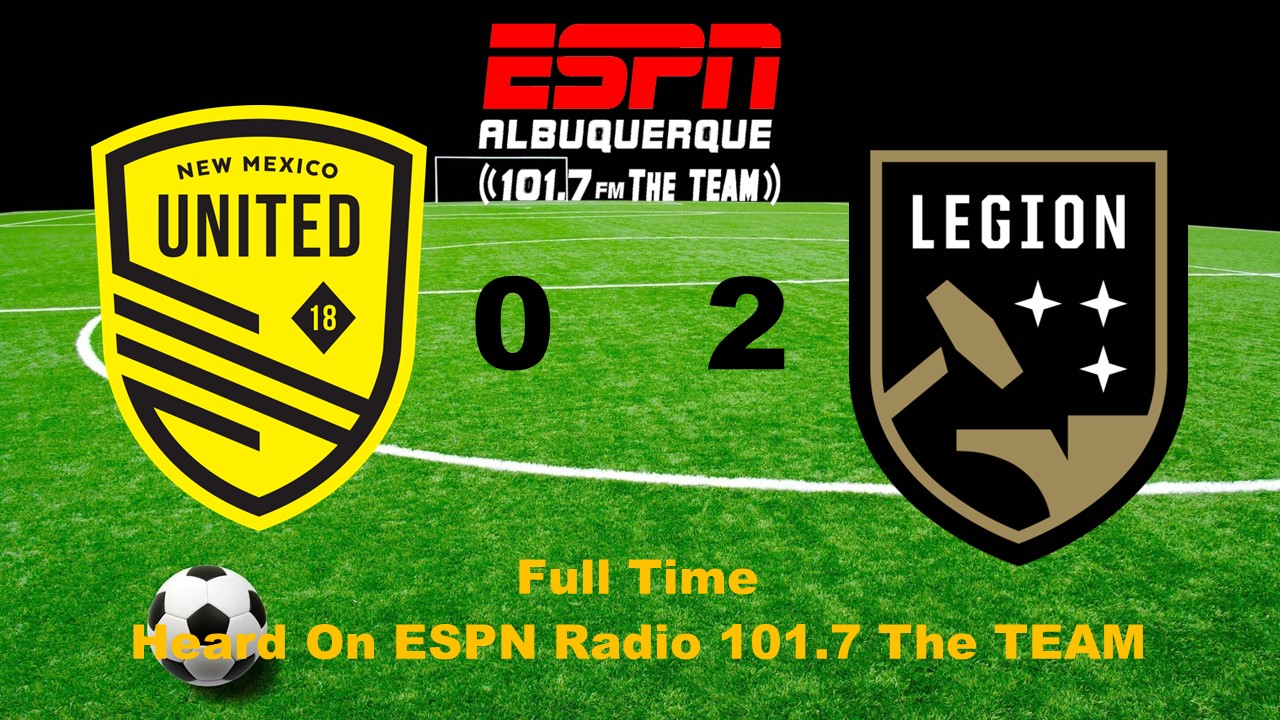 New Mexico United should have returned to The Lab full of confidence after extending their winning streak to five matches. Their play during the first half didn’t show it though.

Birmingham Legion FC came into the match without their leading scorer, but from the opening whistle, they displayed far more confidence than the hosts did. Legion came out in a high press and didn’t relent the entire opening 45 minutes of the affair. Very early on, the press had a direct impact on how United was attempting to build out of the back. United fell prone to making hasty or poor passes in the midfield and their own half.

The mounting pressure also caused United to play with hesitation at times. Those moments of hesitation allowed Legion to pick up the opening goal. Legion found their way into the attacking third in the 20th after picking up a loose ball and worked it around to the right side of the area. From there, Jonathan Dean crossed it to the far post and the waiting Juan Agudelo. The forward was able to elevate over the United defenders and head the ball into the lower-left corner for the opener.

Legion’s pressure would continue and Enzo Martinez decided it was time to put a notch on the scoreboard for himself. In a run of play that saw Agudelo involved once more, he took possession of a cross inside the six-yard box. Instead of taking the shot from close range, he squared it to Martinez. Going to his right, Martinez looked covered by Kalen Ryden, but the centreback slipped giving the midfielder a yard of separation. With that space, Martinez went back across his body and put the ball past Tambakis to double the lead for the visitors.

United finished the first half with only one shot credited to them. Although they improved upon that in the second half, none of their attempts truly threatened the Legion keeper. Even with the visitors backing off of the intensity of the press, they still continued to close down on United with every touch. Legion was able to move efficiently in defense and often read where the next pass from United was going. That benefitted the visitors and prevented New Mexico from stringing together an effective attack for much of the match. With United unable to find an answer to the pressure, Legion would go on to pick up their seventh win of the season and hold United goalless.

Enzo Martinez – The Legion midfielder was a thorn in United’s side throughout the evening and showed why he is a true asset for his club. His defensive pressure in the midfield forced United into some bad decisions and his dexterity on the ball put him in the perfect position to pick up another goal.

United returns to play on Saturday, July 2nd when they travel to California once again. This time they will face off against Monterey Bay FC to begin a stretch of five matches in fifteen days.