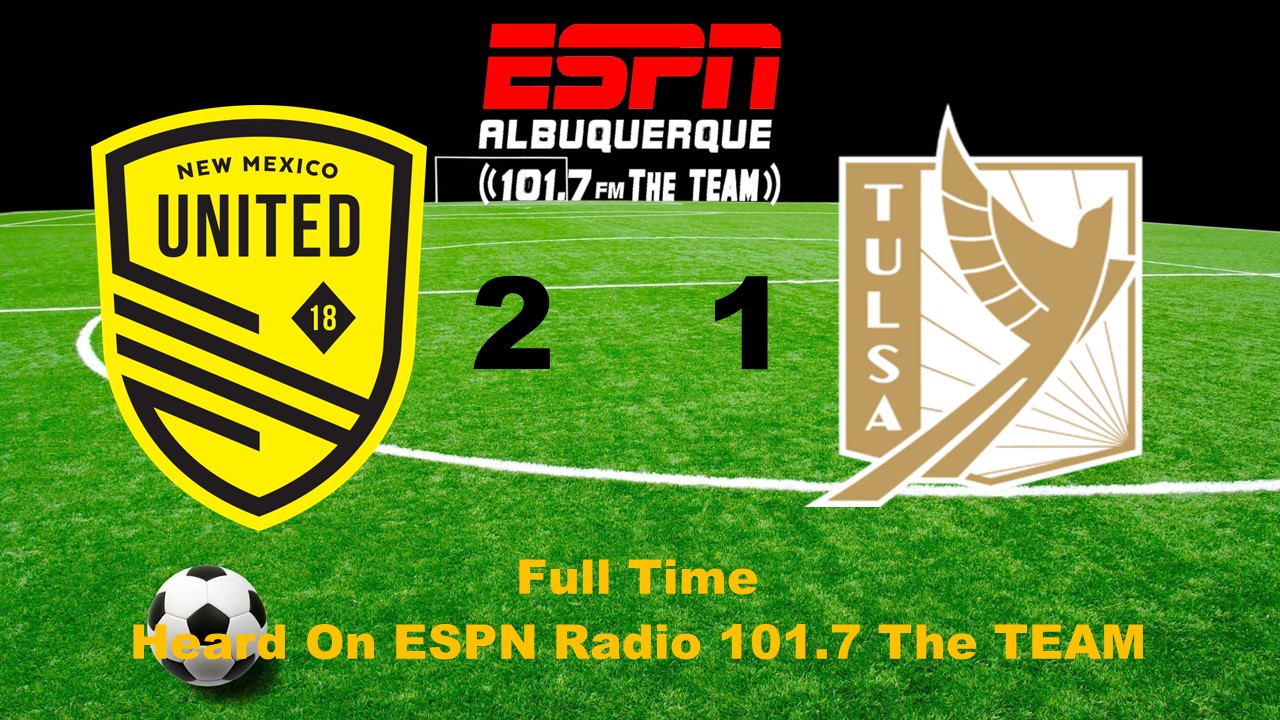 For the second time within a week, Jerome Kiesewetter and Justin Portillo gave New Mexico United a winning goal. That goal extended United’s current road unbeaten streak to seven matches and makes the club unbeaten since the Birmingham Legion match.

Unlike most United matches, in which the club likes to play with pace, there was a slower tempo. Both sides seemed content, but the pace played more into United’s hands with the lineup that was sent out in Tulsa. Still facing a need to rotate players during a congested part of the schedule, Zach Prince put out what appeared to be an extremely defensive lineup.

Despite the lack of true attacking options out of the midfield, United’s play was technically sound and very fluid. Raddy Ovouka commanded the left side of the pitch, controlling Sean McFarlane and severely limiting his touches on the ball. Ovouka also showed his ability to push the ball forward, creating chances multiple times down the pitch.

The opening forty-five would prove to be largely uneventful with neither side having more than a minor threat on goal. That all changed after halftime though.

In the 53rd, United won their first corner of the half and with Portillo not yet on the pitch, the set piece duties fell to Daniel Bruce. Bruce would send the ball in and ended up being recycled out to the left with Ovouka. The return cross from the fullback was sent to the back post. Michael Azira would square the ball on the first touch to Alexis Souahy. Sliding in towards goal, Souahy got on the end of the delivery and knocked the ball first time into the net for the opener. The goal was Souahy’s first for the club.

Tulsa would find an equalizer in the 70th on an odd play. A corner for the hosts was sent into the box and curled towards goal. As Will Seymore attempted to clear the danger, his header went directly into the head of Rashid Tetteh. In a fluke action, the ball rebounded off of Tetteh and back into the goal.

Kiesewetter then played his part in the outcome of the match. In the 73rd, Kiesewetter got tangled up with Johnny Fenwick inside the area and ended up going doing while trying to control the ball. Fenwick appeared to have Kiesewetter held up by the arm before he spun to the ground. The referee pointed to the spot and Portillo was given another chance to remain perfect from the spot. Going to the lower left side of the goal, the midfielder would beat the Tulsa keep to give United the winning goal once again.

Raddy Ovouka – In a rare start, Ovouka managed to lock down one of Tulsa’s key players going forward on the pitch. Ovouka was dominant in defense and made an impact dribbling forward as well. He looked to create chances in the final third and was credited with six tackles on the evening.

United continues their run of matches against Eastern Conference opponents on Saturday when the Pittsburgh Riverhounds visit Albuquerque. The match on Saturday will be marked by the club’s annual Meow Wolf Night with special events going on before the match. The match itself is scheduled to kickoff at 7 p.m. (Mountain) from The Lab.