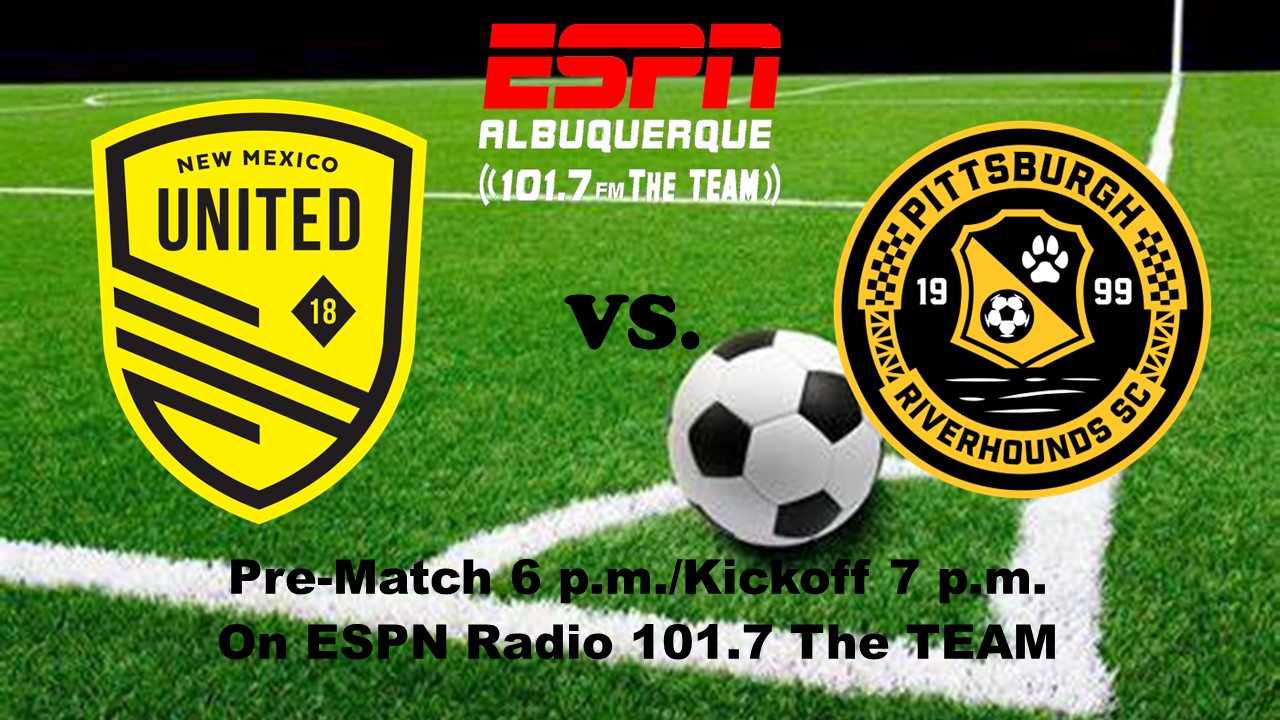 Four days after defeating FC Tulsa on the road, New Mexico United finds themselves back at The Lab. After pushing their way back into the top four of the Western Conference, they have the opportunity to host the Pittsburgh Riverhounds, one of the best clubs in the Eastern Conference.

The Riverhounds have been among the best regular season clubs in the USL over the past four seasons. That success hasn’t translated to success in the playoffs, however. Three times they’ve qualified for post-season play, but have advanced past the first round only once. This season has been a tale of two clubs for the Riverhounds. At Highmark Stadium they’ve been unstoppable and are unbeaten in eight matches. Away from home is another story. On the road, the Riverhounds carry a record of 3-6-2 and are 1-3-1 in the last five attempts away from friendly confines. They are, however, riding a three-match winning streak in which they scored eight times against opponents while only allowing one goal.

The man in charge, Bob Lilley, has had to make changes throughout the season in order to keep up with the increased talent across the league. Early in the season, he threw out a 361 lineup that seemed to work well. Since then, Lilley’s side has found a key target in Russell Cicerone, but isn’t shy about spreading the ball around. At least ten different players have found the back of the net in 2022, making Pittsburgh a threat across the board.

Kenardo Forbes – A long-time member of Lilley’s club, Forbes has been one of the best creators out of the midfield for the Riverhounds this season. Forbes is a player that can go box-to-box, but his strengths lie in going forward. He’s collected seven assists and forty-three chances created through nineteen appearances. United’s midfield will need to cut down on the space he has available to him in order to prevent him from making a connection to Cicerone.

United is also on an unbeaten run, picking up eight points out of a possible twelve over the past two weeks. The recent surge has lifted the club back into fourth place in the West while still having matches in hand over key opponents. Zach Prince isn’t ready to call the season good though, as evidenced by the club’s recent signing of forward Romario Williams. Another former Battery player, WIliams coming in signifies that United is still going to try and make a push in the second half of the season. Although Williams likely won’t make an appearance this weekend, United will be close to full strength, expecting to miss only Amando Moreno. After a minor injury and an extra match off, Chris Wehan could be champing at the bit to get back on the pitch against Pittsburgh.

Despite the good run of form, United has lacked creativity going forward with the absences of Wehan, Sergio Rivas, and Cristian Nava. On Wednesday against Tulsa, United made a concerted effort to push the ball down the wings and did have some success playing from the wide areas. That type of attack needs to be spelled by some good crossing runs through the middle to prevent Pittsburgh from being able to key in on one segment of the attack. if United can up the tempo and force the ball into the box from multiple angles, they stand a good chance of coming out on top against a tough opponent.

Sergio Rivas – Rivas has had an inconsistent season so far, but when he’s been at his best, he is running at opponents. He showed some of that two weeks ago and what it could do to help the attack of United. Rivas will need to be an engine, especially if Nava or Wehan miss additional time.

Saturday’s match will be highlighted by the third ever Meow Wolf Night at The Lab. Kickoff is scheduled for 7 p.m. (MT) and will be streamed live on ESPN+. The match will also be broadcast live on ESPN Radio 101.7 The TEAM, via The TEAM app, and The TEAM website.