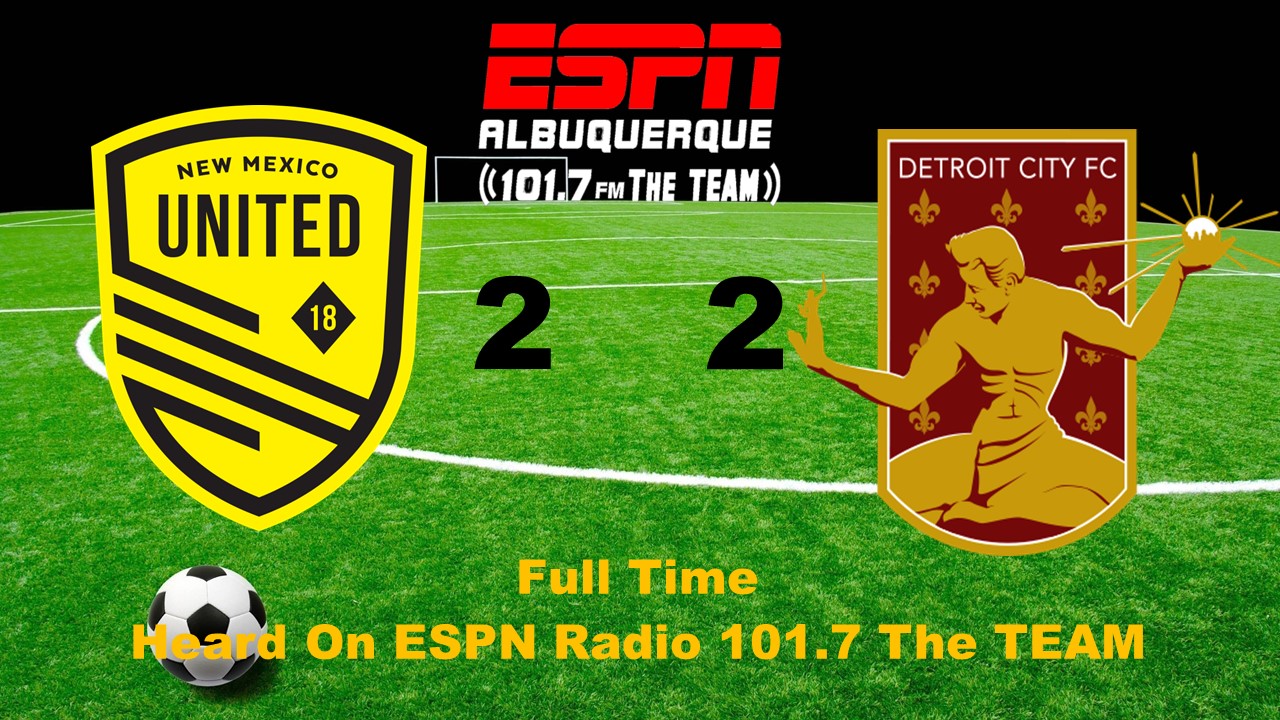 Keyworth Stadium was an appropriate backdrop for the clash between New Mexico United and Detroit City FC. The atmosphere in the stadium loaned its energy to the play on the pitch as the two sides battled from the open to the close of the match.

United spent much of the first half playing with a high line, looking to force an error out of the hosts. Their efforts came close a number of times, but quick decisions made by Nate Steinwascher kept City out of trouble multiple times. United looked to be handling not only the atmosphere but also the ball movement from City.

City was the first on the scoreboard after a controversial penalty was awarded to the hosts. The call came as a loose ball in the box popped up and hit the arm and chest area of Kalen Ryden. The deflection off of Ryden also went off the arm of a City player. Despite Ryden’s arm being in a natural position and his distance from the ball being negligible, the referee still decided to award the hosts a spot kick. Maximiliano Rodriguez was called upon to attempt the penalty kick and converted when Alex Tambakis went the wrong direction.

United kept their composure and continued to press for a goal of their own. In the 29th, Jerome Kiesewetter once again drew a foul in a dangerous spot for United. Chris Wehan, returning from injury, stood over the free kick around 25 yards away from the goal and delivered a rocket into the top corner to draw the Black and Yellow level.

The score would remain knotted until just after the hour mark of the match. Another questionable decision by the referee when he didn’t award a foul in the midfield gave City a chance to go on a break. After taking possession, Connor Rutz played the ball out wide to an unmarked Deklan Wynne, while Kalen Ryden and Will Seymore were caught out of position. Driving into the box, Wynne was able to pop the ball over the outstretched arm of Tambakis to retake the lead.

Just when it looked like City was going to hold off United, Neco Brett squared it up. With under two minutes to play in stoppage time, Brett was played into the box off of a header and placed a well-paced ball under the reach of Steinwascher for the late draw.

Chris Wehan – Returning from injury, Wehan showed why he has been such an integral part of the United squad. With his 34th goal for the club in all competitions, Beez gave United a first-half equalizer and momentum heading into the second half. Nearly adding a second later in the night, Wehan’s return nearly won the match outright for United.

United returns to play on Sunday, July 31 when they continue their road trip. Their next opponent will be New York Red Bulls II at MSU Stadium. That match is scheduled to kickoff at 4:00 p.m. (MT).