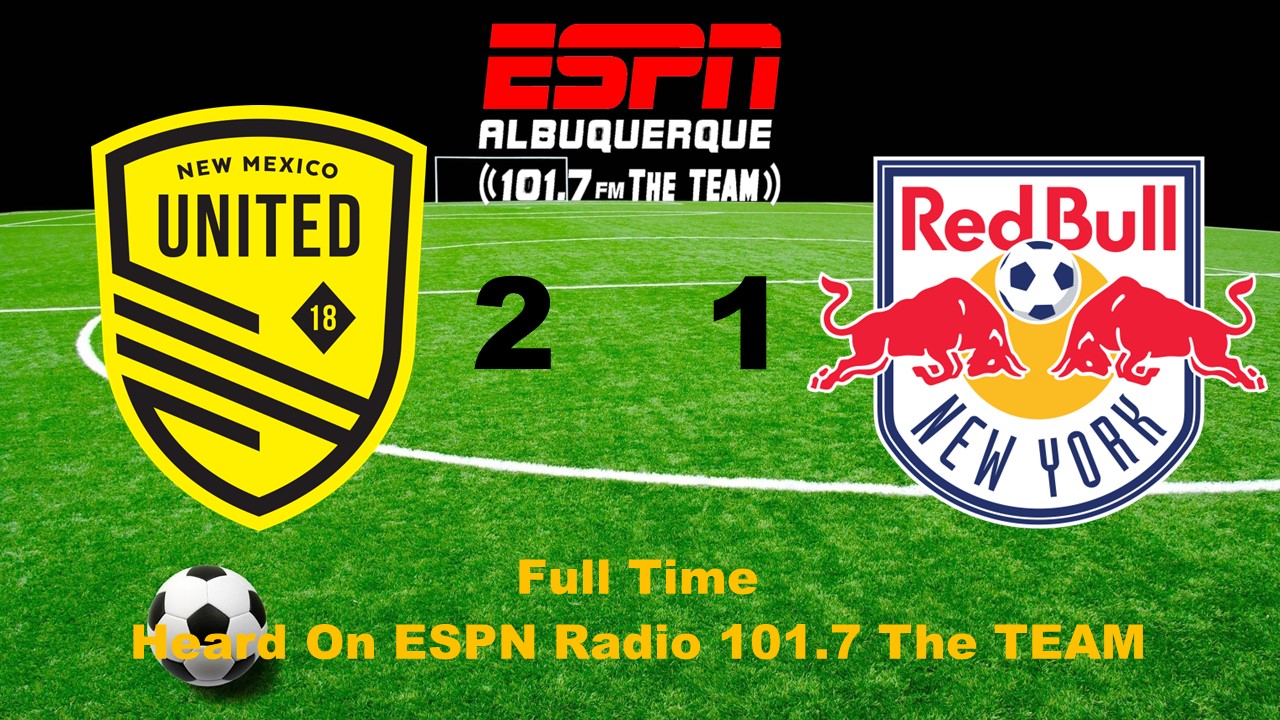 Heading into the first-ever match between New Mexico United and New York Red Bulls II, it was assumed by many that United was in for a cakewalk. The opening ten minutes of the match certainly played into that narrative when United snatched the early lead.

Jerome Kiesewetter and Neco Brett looked to have the better of the Baby Bulls high line from the opening whistle as they were able to generate a lot of space in the attacking half of the pitch. With their line pressed up into United’s half of the pitch, Red Bulls hoped that United would turn out to be weak in possession and not be able to get the ball forward. Kiesewetter, however, had other plans. His first few attacking runs looked good down the left and he was able to pull the NYRB defenders far enough away from the center of the area that Brett was able to get into position for the square ball without any trouble. In one of the easiest goals scored for United this season, Brett tapped the ball into the bottom right corner for the opener.

United would continue to assert their control over the first half, but they wouldn’t be able to double the lead despite having ample opportunity to do so. In the 29th, Kieswetter and Brett again got into dangerous positions and looked to be in for the second of the night. This time Kiesewetter came in from the right of the box while Brett was on the left. Kiesewetter had plenty of time to weigh his options and opted to shoot from the edge of the area instead of laying the ball off to Brett. Jerome’s shot had plenty of power behind it, but it was far from the frame of the goal and ended the attack.

Just before the half, Daniel Bruce put United in position to pick up another chance after drawing a foul at the top of the box. Due to the positioning of the ball, Brett was given the chance to take the kick. Brett’s delivery was sound and went through the wall, however, the placement of the kick was off and the ball settled into the arms of NYRB keeper, Ioannis Nikopolidis.

Not surrendering a second goal in the first half seemed to be a rallying cry for the hosts as they came out with far more intensity than United after the break. They adjusted how they wanted to play and looked to move the ball through the middle of the pitch more. United’s formation kept them out of the middle for much of the match, giving New York space to work. The lack of sharpness from United resulted in a fluke opportunity for Steven Sserwadda in the 55th. The ball was sent into the box by the Red Bulls, but United couldn’t clear the danger, allowing the ball to take a number of deflections before Sserwadda could claim the ball and poke it under the legs of Alex Tambakis for the 11th goal of the season for the Bulls.

That goal further emboldened the bottom-dwelling Red Bulls and their press continued to cause issues for United. The possession and momentum swung favorably for the hosts as the Black & Yellow attempted to make adjustments and play route one football. Even after the sending off of Hassan Ndam, New York’s press remained intact, forcing United to play out of the back and reset the run of play. At the same time that Ndam was sent off, Amando Moreno finally made his return for United after missing nearly ten months due to his torn ACL, suffered in October of 2021. Moreno’s first few touches looked promising and he was proactive in and around the area. Despite the introduction of Moreno and the debut of Romario Williams, the efforts of United to find a winner were halted multiple times due to fouls or the flag going up for offside.

For the second match in a row, it took United until stoppage-time to find that elusive second goal. United was awarded a corner as the clock rolled over into the 91st minute and Justin Portillo delivered a beautiful ball into the box. Unlikely hero, Will Seymore elevated above the defenders to put a head onto the ball and sent it into the bottom left corner for what would be the match-winner. Portillo was given a chance to extend the lead in the fourth minute of stoppage when a penalty was awarded to United. His attempt was lacking in pace or creativity and Nikopolidis was able to easily save the take, Portillo’s first miss of the season.

Will Seymore – The man who found the match winner was instrumental in United’s attack all night. He was a creator going forward and was even better dropping back into defense. Seymore has been the guy to fill any role he’s been put into this season and is proving his case for player of the season for the club.

United is back at home after two consecutive matches on the road. They have two matches this week against Sacramento Republic FC and The Miami FC. Sacramento is in town for their match on Wednesday night at The Lab, where kickoff is scheduled for 7:00 p.m. (MT).